Which hose for my 12v pump?

I’ve been reading around to see what kind of hose to use for my 12v setup. Everywhere seems to say polybraid, but it just doesn’t seem flexible or easy to work with. Do you guys use polybraid, or something different? Can I use a garden hose or something similar?

Polybraid hose on the cheap, kuritech for a little more. Polybraid will work, but kuritec is preferred. I use 200’ of polybraid and dont have a problem with it. Never tried the kuri.

Doesn’t it seem rather stiff to you?

It might have loosened up some as it got used… cant recall if it felt stiff when i got it, or not.

Thanks a lot! Maybe it just needs to be broken in. And that’s a great price.

Spend the little bit of difference and get the red kuri-tec. You won’t regret it.

What are the advantages of the red over the yellow.

Cool thanks for the tip. I think I’d only need about 200 feet. What sets this one apart? Which hose for my 12v pump?

What are the advantages of the red over the yellow.

I was wondering the same thing lol. I’ve seen yellow on the Bandit and red on the softwash setup from the power was store on their YouTube page.

The only Info I really seen in a side by side comparison on paper at least was the psi rating diffrence with yellow having the advantage. So maybe red is lighter. I’m sure that would make a huge diffrence. No clue though. I havent tested either personaly.

Personal preference mainly. You can go to their website and see the specs. The red is smooth while most the yellow I’ve seen is ribbed thus a little stiffer

And that’s what I’m trying to prevent. I’m not into the stiff hoses. Thank you @Racer.

I use the red hose from Pressure Wash Store. I am happy with it, but I have never used the yellow so can’t offer any comparative info. I think the red is less $$. The red will “kink” every once in a while & cut flow but that is very, very rare. If the yellow is more rigid, it may be less prone to “kinks”? As a side, I recently put two 250 sections together for a total run of 500 feet. My Gould booster pump pushed wash solution 30 to 40 vertical feet just fine.

I couldn’t believe how dang big the kuri-tec hoses are. I spent $700 on a maryuama chemical pump to throw on an old gx160 only to find I can’t keep putting stuff on this trailer. No space for it. I’m gonna have to upgrade asap or build another trailer just for softwashing dryvit.

I couldn’t imagine adding a two more hose reels, the gx160 and maryuama and a big enough tank to run two guns. Anyway, this yellow kuritec is a monster. I had to take stuff off the trailer to get the softwash tank on and the hose since I don’t have a reel yet.

I’m gonna have to put gator locks on it and leave it hanging when I’m not using it. Bonkers. 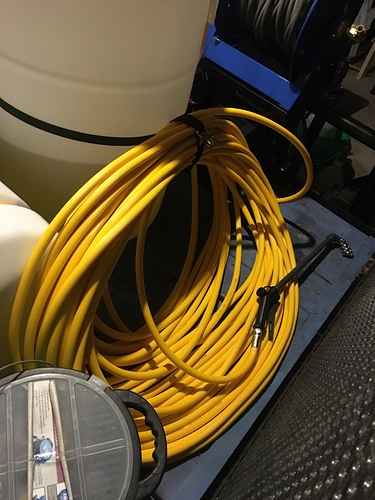 Hey squid, any chance you can post up or send me some pics of your set up? I ordered my tank and am expecting it in the next week. I’m curious on the best way to do the plumbing for the 12v pump.

There are lots of ways to do it, but @Racer gives a pretty thorough explanation of a good way to set one up in this video. He uses drop sticks and cam locks.

Certainly, but this being my first 12v I’m kinda learning on the fly. I’ll show you how I did it, but there’s probably some other folks better to listen to about it.

The one thing I wish I would’ve done is get the pump in a box set up from PT. I did the same thing they’re selling in the pump in a box kit thanks to the wiring diagram they sent for about 1/3 the cost, but it was kind of a pain to track down all the parts and wire it. Mostly the little fan. Had to go to Best Buy for it. Switch at O’Reilly’s. Menards for everything else.

It would’ve been worth it to me to pay the $99 and have them do it.