Just a quick video showing you gentleman how home advisor gets most of their leads. I’ve heard great things about them, and also some not great things. Sounds like the trick is to call them before anyone else!

If you guys want any videos showing you how to do anything marketing related online feel free to ask! I’m sure the whole community can get some good insight!

If you’re interested in making a video with me I’d love to do it. We’ve had tremendous success with homeadvisor. Who knows? Might help your YouTube channel and mine.

Yeah homeadvisor is my number one source of marketing right now. It’s awesome.

Probably best not to have any homeadvisor videos here. Don’t support scam artist. Kinda like a pyramid scheme. There will always be someone that makes some money or has a good story, but the other 99% are getting the shaft.

Definitely not a scam. And I’d say it’s probably 80% getting the shaft. But that’s because they chose not to learn how to use it and blame HomeAdvisor in place of personal responsibility. You’re hearing mostly from those people.

If you bought a Honda engine that was new to the market within the last few years and you made money with that engine wouldn’t you want to know the maintenance schedule, how this “new” model worked, and how to operate the new features?

More often than not the people you’re hearing from just want to turn a key and hope for the best.

I’m trying to remember the quote about the automobile being a fad, but the horse and buggy will remain the dominant means of transportation…

Im still thinking the internet is a fad. You can’t change my mind one percenter lol

You’re still the only person I’ve ever known who uses Bing.

It’s what my wife put on the computer for me to search with. I don’t like the word google and yahoo used top have commercials I didn’t like.

@Innocentbystander I have a feeling you that the way you feel about the internet is similar to the feeling I have when I think about my ex-girlfriend.

In which that case, your entitled to have your negative opinion, but whatever platform you used was probably used incorrectly. Everything has a system and when a process is followed, can produce good fruit, including home advisor. A lot of people either aren’t quick to call the lead or don’t follow up.

In this case, your opinion is based on other people that probably did it wrong. @squidskc & @HydroBlast are CRUSHING it on home advisor! Why not ask them how they’re doing it? One of my power washing companies got over 120 leads in the last 30 days, 95 being from Paid Google Ads. Look at the conversions number below and the date above. Numbers don’t lie, people do. 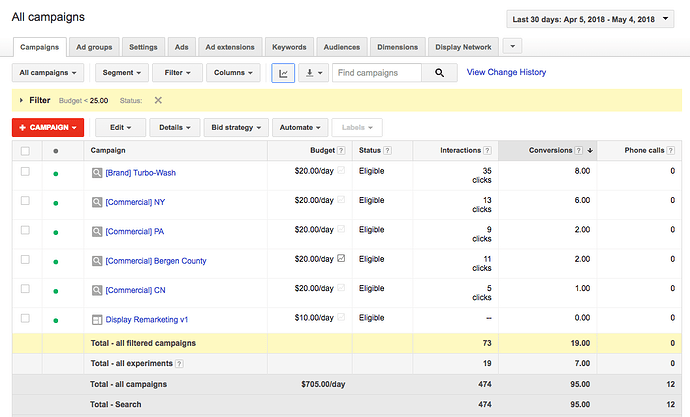 and that leads to texts like the one I got yesterday… 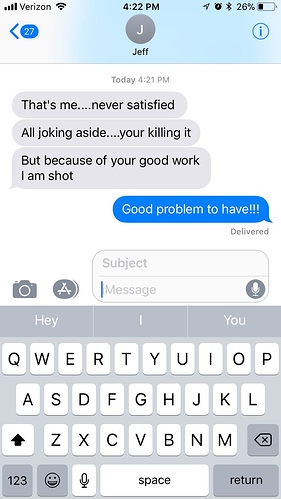 and @squidskc LOL I thought the same thing about bing!! Did you know that when people use safari on their phone, that is also bing?!?!? blew my mind. Turns out that 40% of bing users are between the ages of 35-55, which is a prime age for homeowners. Bing makes up about 15-20% of online leads. This is a call tracking log from yesterday at 8:27 - 12:34.

I put home advisor in the same pot with BBB, Angies List and the other scams. I have never used Home Advisor. After receiving approx. I received about 30 calls from them one day in particular. Same guy. Wouldn’t stop. He called me a MF for hanging up on him. I reported them to the NC Attorney Generals office in 2016. I will never have anything to do with such a company. You are correct. I do not use the internet to acquire customers. If you have to use the internet to get business then you are doing something wrong. Hard work, ethics, and karma build business that last. Those that build off the internet won’t succeed long term, in my opinion. I average 30 to 40 calls a day from people wanting to schedule. I don’t want or need a company that intentionally gives a lead to me and 5 others, billing all of them, to get work for me. My method works for me. I just hate to see others lose their money to a scam.

Maybe I’m out of my lane saying this as I haven’t been around this forum long, but I come here to read and learn about pressure washing, not have thinly veiled marketing thrown in my face.

@Innocentbystander Hey as long as it works for you! I could not agree more that hard work, ethics, and karma build the business that lasts but everyone has their way of getting new business. Your job then with the new business is to create those relationships!

What’s an average lead on home advisor cost a contractor.

@Sharpe I personally haven’t used them but for residential jobs, depending on quality I believe it’s about 15-25ish and for commercial about 50. @squidskc probably knows better, he’s had great success with them

Commercial are $35-50, but he’s right on about residential.

I always hear complaints about fake leads which I can’t understand because I’ve gotten so many real life, actual human being customers.

@JonathanMedina I think we should definitely cover the difference between fake leads and bad leads.

I just got on it 2 mos ago… I got the first job called and paid my fees… have got 7 other calls.
2 were wrong numbers got credit… Now the other jobs I bid on but guess im just to HIGH PRICE… Guy told me the next guy asked what my price was and he cut it $100 did the job…
Its not working for me, again Im just to high, Im not doing a job cheap cheap… Fixing to turn off my leads off…