Using a direct drive pump with a buffer tank

It has a reduction gearbox which I believe falls under the category of ‘direct drive’.

After reading a few posts, it seems that there is a difference of opinion between direct-drive and belt-driven pressure washers.

I’m very new to this so any advice would be greatly appreciated.

If it’s gear drive you should be ok

If it has a gearbox it will have a reduced rpm around 1450 as opposed to a direct drive around 3400. With slower turning pumps they will have pretty good sized bores to offset their slow speed. The stoke on the plungers is about the same but they are slower moving so they pull a better vacuum and are better suited if you pull supply from a tank 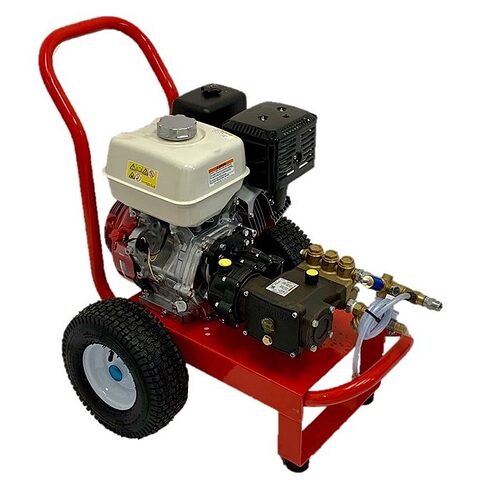 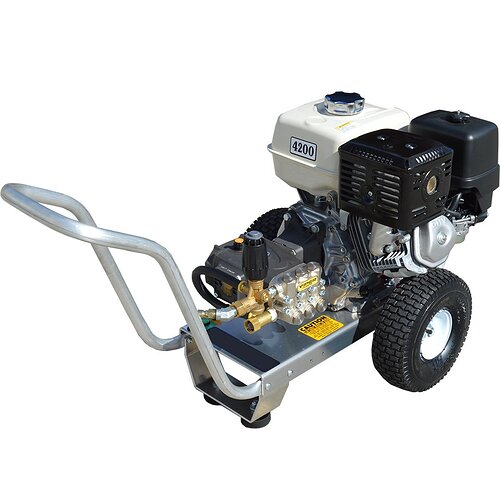 Might want to check those stats, not sure you’d be getting 5gpm and 2900psi from a GX390. The other guys can confirm.

That being said I use a gear drive off my buffer tank, works great.

I have a Cat Pumps 66DX40G1I (4 GPM, maximum 4000 PSI) which is directly driven (no gearbox) by a Honda GX390 at 3400 RPM. This configuration draws from a buffer tank, no problem. Granted, a buffer tank is not strictly necessary with the usual local municipal supply (a residential spigot generally provided about 5 GPM); however, while working in more rural areas, the buffer tank can be quite valuable.

@dcbrock Why do you doubt 5GPM at 2900 PSI? These are positive displacement pumps, meaning they pump the designated flow rate regardless of pressure (and are rated for a given pressure maximum). What am I missing?

That’s interesting as that pump has 14mm bores and a 8.6mm stroke. How does it pull when you don’t have much head pressure from your buffer? For instance when your below say 80 gallons.

@dperez I’ve never had a problem with it drawing water from the buffer tank, unless I let the tank drain down to about 20 gallons (of 150 gallons) which is mere inches (and usually not intentional

I see and that’s exactly what I was talking about. All my belt driven machines with 1450 rpm pumps and thet would suck until they hit air. You got a good runner though if you can pull it down that far it’s typically not the norm

Another thing to add is 3400 rpm pumps will stay drawing as they’re being run. The pump is leaning on being gravity fed as well as pulling is own vacuum. If the flow stops and you then restart it could have a tough time getting out of the hole from a dig

To be fair, I can’t really say that I’m not sucking air at that point… for example, just earlier today, I lost track of time and my buffer tank drained. The pump input is on the side of the tank that was closest to the road centerline (elevated relative to the other side of the tank), and the other side of the tank had only a couple inches of water. I didn’t bother to check if the pump input was sucking air; instead, I just cut the pump off, opened the spigot again, and occupied myself packing up for a few minutes before rinsing the little bit remaining. In other words, everything works as intended, but only when I pay attention

In response to the concern about restarting, I frequently cut my engine/pump instead of letting it run when not needed (save gas, save the neighbors peace and quiet, etc), and I’ve never had an issue with it drawing from the buffer tank on a restart.

Yeah, that’s what happens. I mean, for about a second… before I release the trigger and resolve my attention deficit caused problem lol

Don’t ever worry too much about it. I had trucks with 750 gallons worth of water run dry MULTIPLE times a day with no ill effect. It was a 10 min break timer

Pardon a noobie question here but is there no way to prime the pump if it sucks air from your buffer tank?

Since I can only assume you have a pump that gives you problems catching prime again. You should fill your buffer tank as much as it takes to add enough inlet psi. If it’s a real issue for you then you may be well served adding a valve on the other side of the pump manifold that you can open and allow air to escape. Lowering engine rpms also would help you.

Air gets sucked from the buffer tank only when the water level drops to the point that the buffer tank outflow is no longer submerged (or very nearly no longer submerged…), allowing air to enter the line. There is nothing special about it being a buffer tank; the same thing happens to your car (more or less) if you let it run out of fuel in the tank. Resolution is as simple as you might immediately imagine - add more water to the tank.

Lots of direct drive guys that have been on here do struggle with catching prime. I’ve seen many that would have to run a 12v pump to pressure feed their pump. Don’t underestimate how bad those fast spinning pumps don’t want to work in a mobile application

Resolution is as simple as you might immediately imagine