Have a direct drive 4GPM pump on it, going to a gear driven 5.5GPM. I’ve had this pump suggested to me: 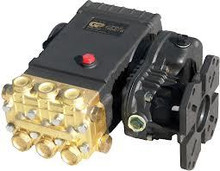 (Not buying from that site, just linking it for the pump specs.)

Interested in this also! I have a gx390 direct drive, I would love to upgrade to this pump if it can handle it!

Either one of these formulas will work for you

John, this pump will definitely work, i was just curious about the specific PSI that it would put out. Apparently this is an easy upgrade… just unbolt the other one, and bolt this one on. Gear driven means it will pull from a buffer tank a lot better than the direct drive, which is another plus.

Will be my first time setting up a buffer tank. I think it’s recommended to put the unloader on it’s own block as well, and run a bypass line back to the buffer tank.

Let us know if it works out if you do it. Got a 4gpm machine that I never use I might do this with.

For another $400 you could get a belt drive with a new Honda motor, the gpm you want, and from what I’ve read gear drives don’t last as long as belt drives.

Definitely want a second opinion on that though as I am not a machine/technical guru. Lol

Thanks for the heads up. Yeah, belt drive is the preferred choice, i believe.

I have the pump and unloader priced at $780 plus shipping from southside, so it would be a little bit bigger of a difference, but yeah the decision for whether to upgrade or get a whole new machine is a tough one. Probably just upgrade for now, and see how it goes.

Id love to get the link for the pump and unloader you are getting for $780 for your Honda engine, as I’m trying to upgrade the same engine thanks

Id love to get the link for the pump and unloader you are getting for $780 for your Honda engine, as I’m trying to upgrade the same engine thanks

Call or email Russ Johnson at Southside Equipment. Tell him you want to upgrade the GX390 to gear driven 5.5. The pump i received was HP5535UR, with an unloader.

Let us know if it works out if you do it. Got a 4gpm machine that I never use I might do this with.

Things are working great with it. Here is a play by play.

It was a lot larger than the original pump, and more than i was expecting. I still had my pressure washer on the cart that came with it, but no way it would work with this pump. So first thing i did was remove the wheels and frame. 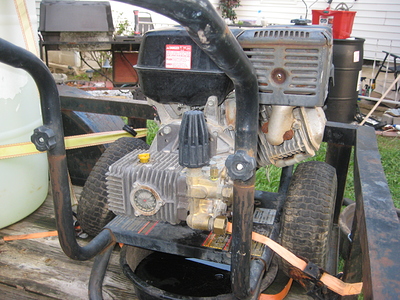 After that, it’s pretty much as easy as everyone says. 4 bolts to remove the old pump, then 4 bolts to put the new one on. Here is a picture of the crankshaft after i removed the old pump. It was rusty, so i cleaned it up with a little PB blaster, then, following the advice of @Innocentbystander, I smeared a bunch of grey anti seize ($5 bucks from Advance Auto) on the keyway and key, 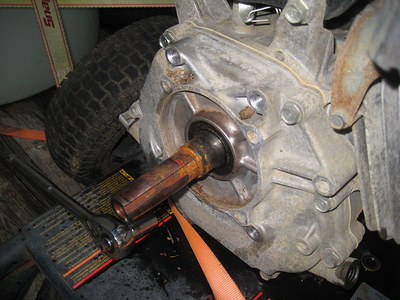 There’s not much i can say about screwing it on, except here is one tip that helped me get it together, as it is rather heavy and awkward to do by yourself.

You just slide the new pump over the crankshaft, but there is a little key that sits in the keyway which needs to be properly aligned, and flush in the slot. This was very difficult to do, because the key is loose, and by the time i rotated the engine about where i thought the slot was, and then tried to lift the pump up, it kept knocking the key out, or never even getting close to where it should be. It’s made more difficult because you cant easily see the key as you are trying to slide the heavy pump over the crankshaft.

There might be a better way to do it, but I finally had the idea to take a ziptie and secure the key into the indention… once i did that, i had it on and secured in probably less than a minute. Just get it started, which you will easily be able to feel, and clip off the ziptie right before you slide it all the way flush. Here’s a close up of that (click image for the full version). 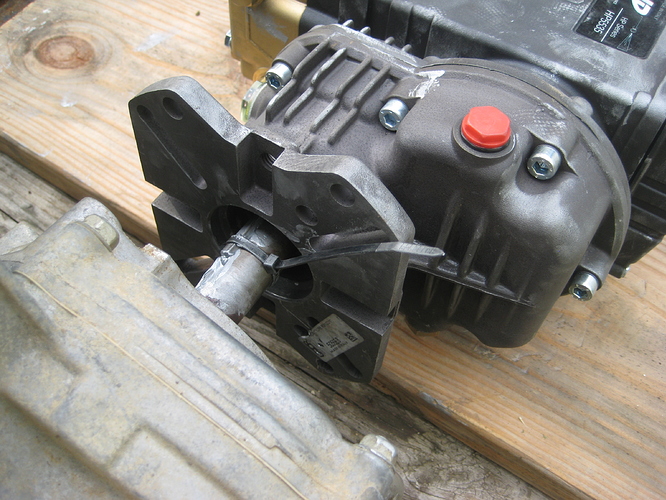 After that, that was it. I was pretty nervous firing it up for the first time, as there were no gaskets or anything… just 4 bolts and a new really heavy and big pump assembly. It pulled a little differently, and sounded a little differently when the gears spun up, but everything worked great. I’ve used it for several 10 hour days, and have had no issues whatsoever.

Ok, now here are some challenges i ran into when i mounted it to the trailer. First of all, i always struggle with getting the holes lined up with the engine. I know you can make a template, but its tricky to lift the engine up by yourself to trace one. I also couldn’t easily get a pencil or nail into the holes to scratch a mark, because of the tight quarters. Finally, I had the idea to take a zip tie and bend it 90 degrees, then I dunked the clip end into some thick paint and got a nice glob on the end. 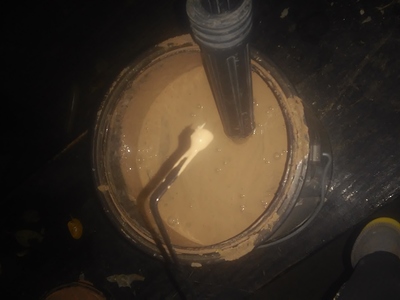 Next i fed it into the engine mount holes, and dabbed the wood. 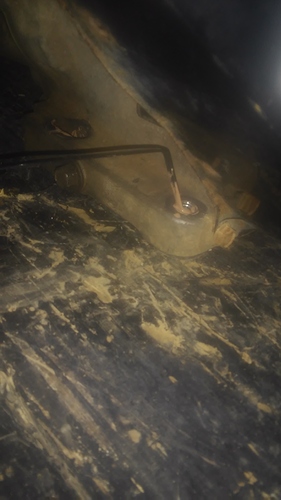 It surprisingly left a clear mark for each spot, and when i drilled them, they all lined up nicely. 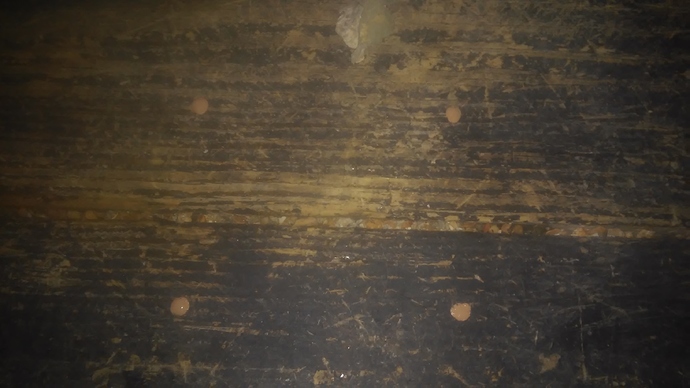 I just went straight to the wood, using rubber feet in between. No idea if you should have something else between the rubber feet and the wood, but that’s what i did. I went to a local Napa shop and asked if they had anything that might work… they found these rubber feet that worked perfectly. You can find something similar at Oreilly’s, but i prefer the Napa ones, as they are thicker and more sturdy. They were less than $1 apiece. Tomorrow i will edit in the Napa part number. 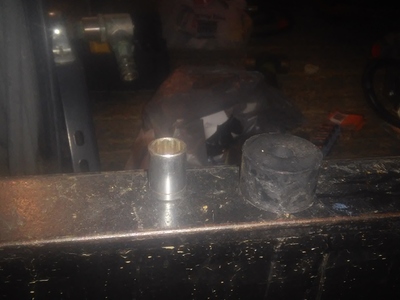 The biggest challenge i found, was that there is a pretty good height difference between the engine and pump mounting brackets. You can see here that it took two rubber feet stacked up to get it somewhat even. 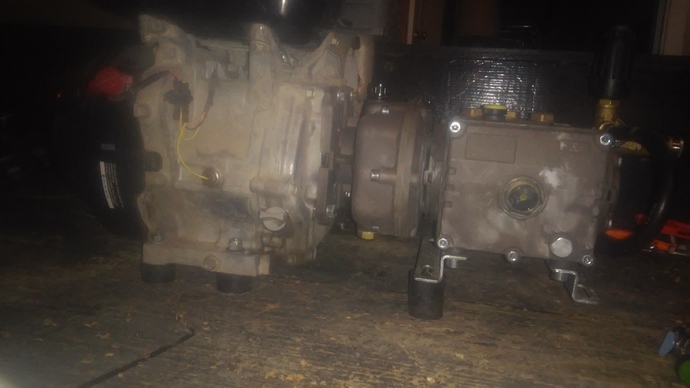 Instead of doing that, i grabbed a piece of 3/4" OSB that i had lying around, and then 1 rubber foot seemed to do the trick. OSB might not be the best choice, but its what i had handy. 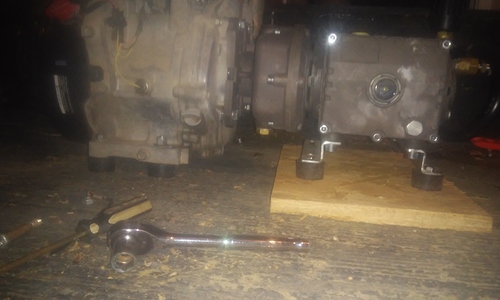 Well, there you have it. Hope this helps anyone that is curious about the process.

Feel free to suggest any changes that might need to be made, or advice on how to do anything better.

Well done and great write up!

So @tireshark, after using it for a few days have you noticed any differences compared to having 4000 PSI @ 4 GPM? I’m curious to know what difference it has made, for better or worse or both.

and from what I’ve read gear drives don’t last as long as belt drives.

You’ve heard that “direct drive” pumps and engines do not last as long. Which is true.

Using a gearbox or a belt drive both achieve the exact same end result, they change the gearing between the engine and pump.

Early gear boxes were problematic. They have come on par with belt drive now. I’ll get one soon. Just waiting for Udor or Landa to offer me a demo one

And @Innocentbystander, I read they suffer the same consequence of a direct drive due to heat off the engine, but if that’s not the case I stand corrected.

At the end of the day, I’m near the bottom of a long list when it comes to giving equipment advice anyhow.

I don’t think there is enough heat to worry about. But i don’t know

Does your car gearbox suffer from heat off the engine?

I’ll send you a picture later, but the gearbox is between pump and engine… so there’s plenty cool air around all components if that were a problem. And the gearbox is in an oil bath.

Fair enough. No need to send a picture. I’ve been looking at gear drive udors recently and could probably tell you the model number of yours by the gpm and psi off the top of my head. Lol

I’ve been reading a ton and looking at all the pretty pictures.

The only tricky bit is changing gears for max fuel economy or performance. Takes a while to learn when it’s worth changing gears.

So a belt drive has fixed gearing, you can change the pulleys to adjust pump and engine rpm. But while it’s running… you are stuck with that gear ratio.

You see how pumps sometimes have multiple psi and rpm ratings on the label?

With a gearbox you can change gears while engine is running. There are no automatic gearboxes tho, but when you are running at low load, example rinsing, you can pull the little clutch and shift up a gear.

Then when you’re tying to shoot soap up really high, drop down a couple gears so your pump is really pushing hard and you’ll shoot soap an extra two stories.

Pretty sure mines not udor

Biggest thing with a gear box is there is no belt or ploy chain to absorb the energy transfer from shaft to pump. You are gear to shaft. Bigger motors shear more ears. At least in the past.