Hello pressure washing peeps! I’m probably showing my ignorance here…The hose in the top left going into the tank from the unloader fills the tank whenever I am connected to a local supply, even when I am washing. One of my clients commented on it and I felt a bit sketchy using his water twice. I probably filled 50 gallons while cleaning a deck. I told him, honestly and not just an excuse, that I would run tank water at the end so that I won’t have to haul it. The description of the unloader in the manual says that it sends flow to the bypass when the trigger is off, but it does in fact fill even when the wand is in use. Is this unusual or cause for concern? I really appreciate your thoughts and comments on this. 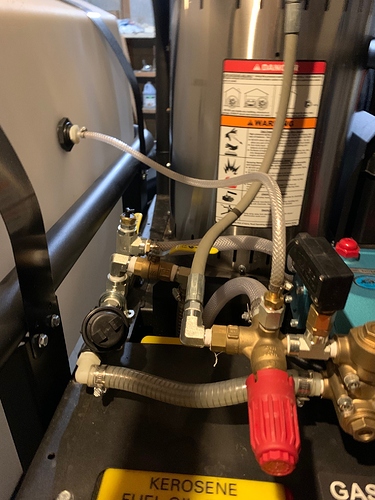 That’s how it’s supposed to work but instead of using the customer’s water direct to the machine, connect it to the tank and feed the machine from the tank, like an endless loop.

Awesome. Thanks for the tip! That’s how I’ll run from now on.

Does the machine draw from the tank already?

It shouldn’t be bypassing much of anything while you’re on the trigger. If it is, you need to set the unloader.

shouldn’t be bypassing much of anything while you’re on the trigger.

Good point, I assumed he was meaning washing in general as opposed to actually pulling the trigger.

Thanks for the replies so far. To be more specific, I left the unloader all the way open to 4000 psi with a number seven tip that according to charts was supposed to lower the psi to 1000, which was my target for this deck cleaning job. The pressure worked well, as it did not fur the wood but stripped the mold/mildew/algae While running that scenario the tank filled while on the trigger. I also had the same problem on a subsequent house cleaning where I ended up just running water into the top of the tank since it was going in there anyway. I was using the chemical draw tip on that one.

Take the by pass hose off put your red tip on adjust the unloader till you get a trickle of water when you are on the trigger and leave it alone. Is your burner firing correctly

I believe you’re supposed to set the unloader once and forget it. The nozzle size is what sets pressure from then on.

Hi @Firefighter4hire, that is a configuration that I hadn’t considered. Can I assume you’re messing with me? You guys get into some technical stuff that I don’t always understand so that could be some voodoo magic stuff I don’t know about. I haven’t fired the burner in a while so I can’t answer that. I’ll start it up next time I wash.

@mtmmistavl Austin, start here to get a better understanding of what is happening. @Firefighter4hire wasn’t messing with you. He was describing a method of setting your unloader valve by removing the hose from the bypass and then seeing how much water comes out when you pull the trigger of the gun. Another way is to use a pressure valve to set an unloader, but the visual method is popular as well.

Thank you gentleman! This will be my homework tonight.

@mtmmistavl there are alot smarter people on this forum than I am. But i would never joke with you about that kind of stuff pressure Washers are dangerous excpesaily yours simply because the burner makes it a bomb. Take some time to learn your equipment it will save you alot of headache in the long run. Be careful with your machine it will explode and that will be a bad day even if no one gets hurt

Thank your for that advice. I’ll read up on what you’re talking about in order to better understand the hazards of using a burner. Honestly, I haven’t used it on a job yet since I’ve been doing standard residential work.

What is this line for? 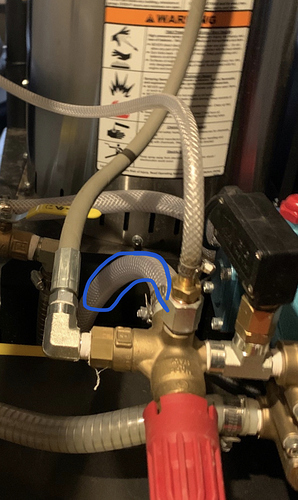 Second question. Is that black box before the unloader the flow switch for the burner?

@sgb I’m assuming that he has the blow off plumbed away from his unloader if that the case I don’t know why. The black box Is the flow switch or pressure switch depending on what part of the country you are from

If it’s the flow switch for the burner wouldn’t it be burning the whole time since water will always be flowing through the unloader?

I have a stand alone burner and my wires to the flow switch melted and was constantly burning. Luckily i figured it out in about 30 seconds but it still turned my water to steam when I was off the trigger. It got it so hot because the water was trapped in the burner while the flow switch was sending the signal to the burner to keep burning. It was pretty dangerous.

I’m just not sure why it would be put before the unloader.

No you need enough psi to activate it if it was burning the whole time you switch got stuck. Is it pointing up.