So,I was scrolling through one of the FB groups and someone posted a picture of this letter.Now I could see if he had named his company Clear As Day Pressure Washing and SoftWash Systems.Just curious if anyone has any experience on the legalities of this.Is the word SoftWash an infringement of the trademark of SoftWash Systems? 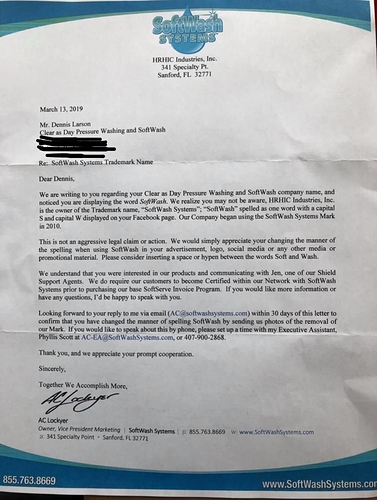 Well…as letters go that’s a pretty nice one I guess. It seems a little asinine to argue over capital letters and spacing but dumber lawsuits have been filed and won.

This is where the pic I texted you came from

I thought I’d seen his name floating around here,I just couldn’t understand how you could trademark a WORD??

Does he think he’s McDonalds? Your business is capitalizing off his world recognized name… That guy is an idiot. I wouldn’t even worry about it.

This is why after insurance and a CPA you start looking for an attorney to have in your back pocket.

I can’t stop thinking about this. Lol. I would change my Voicemail to say the word SoftWash and say capital S and capital W. You could have some fun. I’m sure the guys here have better ideas. We should all send him emails messing with him.

Not one of my customers know what softwashing is… they all know I spray bleach on the house.

I’m going to trademark Bill with a capital B. I will be checking Facebook for Bill’s. You can trademark anything doesn’t mean squat when it comes to enforcing it.

Have no doubt that a lawsuit will follow if it isn’t changed. He is legally in the right. That’s the stuff to think about when you support vendors that hurt contractors though.

They took the post down too. There were tons of people calling AC out on his bs. The original poster paid AC for his 2 day class too. AC is not to be trusted.

He can sue for anything all it means is you’ll lose because you’ll be out money for a lawyer. I doubt he can win. Depending on your state if you win he has to pay your legal fees. Maybe @bdubs will know more.

That’s what I’m hoping is that someone can shed some legal light on this.If my last name was McDonald,could I be sued for opening a restaurant named McDonalds if I didn’t use their golden arches,lol?

There is no question he will win. It has already been proven. Please don’t think I’m taking his side, except in the fact that he does on the copyright on it.

The other day he put something on Facebook about softwash systems is going to be at the Huge Convention this year. Im not sure how I feel about that since I’ve never met the guy, only heard stories. I would like to meet Bob from PressureTek though.

Wow…Now do you suppose if you buy one of HIS systems,then you can use the word SoftWash? That seems pretty low to me.