Thanks for any help,

I’m on my way to buying a soft-wash pump and curious what other guys use? What brand is your favorite? What GPM and PSI

Any tips on guns would be appreciated, especially custom ones because I like building.

Thanks again for your help

Are you referring to 12v pumps? I got away from them earlier this year and it was a great decision. They just wear out too quickly.

Yes that’s what I was referring to, what do you suggest?

Don’t get me wrong, I’ve read many comments on this website of people who have used 12v for years without issue. That just didn’t happen for me. I was going thru 3 to 4 a year despite the fact that I rinsed them after every use with at least 20 gallons of water.

I switched to a gas powered diaphragm pump. It’s a triple diaphragm made by Comet, powered by a Honda Gx200, puts out 9.5 gpm at 150 psi. I can hit around 40 foot high with no wind. Th only thing I would do different is I would have gotten an air powered unit, only because the gas powered ones have a bypass line like a Pressure washer, the air power d ones just have in and out, no bypass. These machines run anywhere from $1500 to $2000, but their reliability is unmatched. And the internals are about as chemical resistant as you can get. Definitely worth the money.

Oh! And no batteries to charge!

Can you send a link to your pump please? 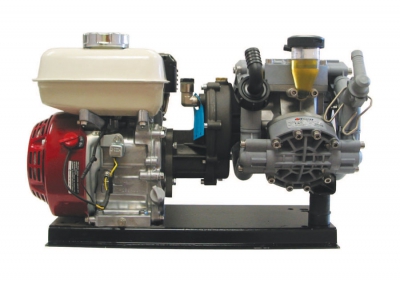 Check out the NEW Roofster from Sun Brite Supply In Maryland! Lower Price, More Volume (9GPM) at 145 PSI and it shoots nearly 50'!

What is the price for that setup?? Anyone know

I love my 12v with the proportioner, but loved it even without just using dropstick. Problem with the gas ones, can’t use a proportioner, though they do have some nice distance. I get 40+ ft with my 12v and you can buy or build a real nice setup for less than $1500.

Yea, the lack of using a proportioner was something I didn’t consider. I don’t like the fact that it has a bypass. I may switch over to air next year.

I loved the 12v system initially. But then I started burning thru pumps. No matter how much I flushed them out, I couldn’t get more than a few months out of one.

Not sure if you’re still around, but I’m looking to eventually put a gas system together…udor kappa 43 and a Honda GX160. I contemplated going air, but I already have the engine, whereas with the air I was going to ha e to buy the pump and compressor.

With the gas, could you possibly elaborate on the pros and cons?

Did you build this setup, feedback? I’m considering the same

No, I did not. I decided just go with 12volt for now until I can afford to put together an air setup. From my understanding and what I’ve read, the gas systems aren’t overly reliable.

I just consider 12 volt pump replacement cost of doing business. As inexpensive as they are they’re very profitable even when replacing every six months or so

This is my first 12volt. I figured the cost of replacement is t overly high when considering the amount. Being brought in. I would like to have it as a backup to the air system when that eventually becomes a reality.

How can you say that? The single highest ROI piece of equipment you’ll ever buy in any business. The cost of a 12v pump is made back in less than an hour or 2 at the most.

PSI on a 12 volt is not the important factor, only the GPM. It can also be a marketing feature when you tell a potential client that you will be cleaning their roof with less PSI than a typical garden hose.

Also I had a client with 30 years of thick algae and mildew growth. She had never had her house washed because she was afraid that the pressure would infiltrate the siding and cause mold to grow behind it. She was told by the installer of the siding that it should never be pressure washed. I did the entire house with the 12 volt (65psi-5.3gpm) and a 2% SH batch mix to ensure as little water infiltration as possible. She wrote an amazing review and even sent us a gift card for $50 for my wife and I to have dinner.