Does anyone have any sodium percarbonate recipes for wood cleaning. I’ve always used dsr-49 or the Pressuretek product. They come mixed with a two other things. I purchased 5lbs raw. The granules are much heavier in this raw form so I’ll definitely have to weight it. I’ll use the F10 measurements dialed back a bit as a starting point. Does anyone use this chemical in raw form or just pre made mix?

I cleaned a deck last fall and used sodium percarbonate at about 6-8 oz per gallon of warm water to help dissolve. Let it dwell for about 15 minutes and be sure to keep it wet. I hit it with about 800 psi and then rinsed well with low pressure. I then followed up with oxalic at 8 oz per gallon to neutralize and brighten. The oxalic makes all the difference. If you use a pump up sprayer be sure to filter the percarb as it doesn’t dissolve very well. Mix it up before even heading out the door in the morning or maybe even the night before. I’m not sure if it would lose any effectiveness overnight though so maybe our chemist @CaCO3Girl can chime in.

Some say not to use sh on decks but I’ve also seen some of the guru’s on here recommend it. I used a house wash mix on a lower area of the same deck and it turned out just as good as the percarb. The only way I could get the percarb to look as good is if I took a scrub brush to it. With the sh I still hit it with about 800 psi but rinsed like crazy afterwards. I also followed up with oxalic to brighten.

This area was with percarb but I also hit it with a deck brush. This is also after the oxalic. The homeowner said he thought the deck was over 25 years old so I feel it turned out okay. 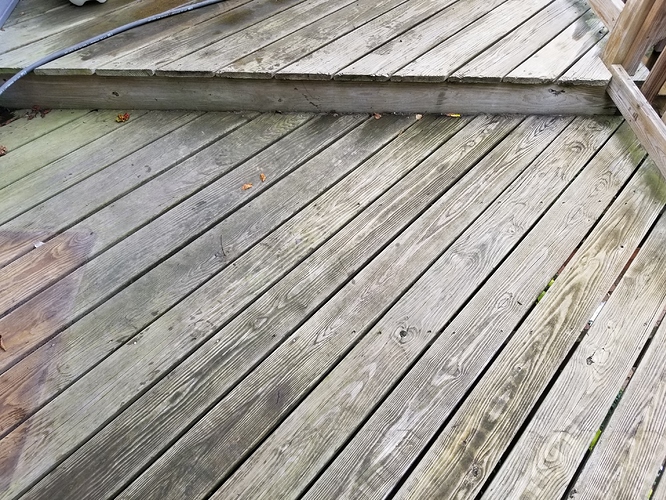 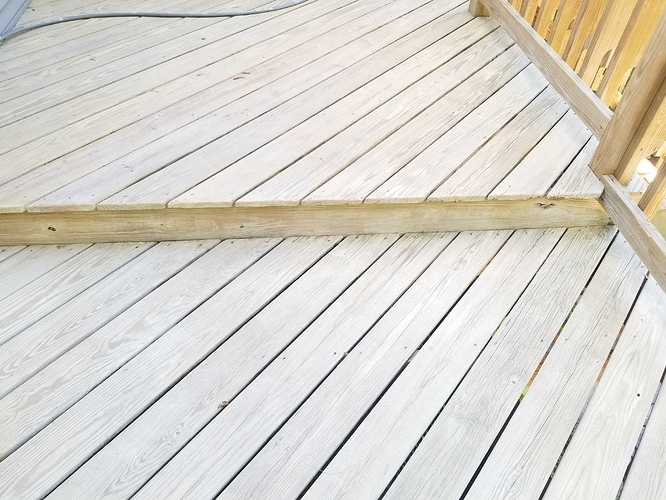 not sure if it would lose any effectiveness overnight though

It actually would lose its effectiveness overnight. That’s why you don’t see a jug of percarb and water for sale on the shelves.

The reaction of adding sodium percarbonate to water actually makes hydrogen peroxide, but it’s a HIGHLY unstable form of it. Meaning it would evaporate a LOT if made the night before.

Also as a side note, don’t pour water and percarb together in a tighthead jug and shake it and leave it…you will have yourself one very puffed out jug and/or one very exploded jug.

@CaCO3Girl is right as usual. If you mix percarbonate, you should use within 3-4 hours. And definitely don’t mix in a tightly sealed container. If using in a backpack sprayer or leave lid extremely loose… Think how peroxide fizzes when you pour on a wound and multiply it by a bunch.

SH destroys organic materials, and that includes the lignen in the wood - the fibres that bind it together.

I guess too strong would damage the top of the wood and it would become soft, like rotten wood.

Does anyone know if this is safe on copper?

That’s a good question. I think I’ll mix up a batch and do some testing. I wouldn’t think it would cause any long term damage but I have no idea.

water isn’t even safe on copper

I get your point but even copper water lines last decades and that’s because of constant contact with water. They were the Cadillac of water lines until pex came out. How long would copper last if it only had to deal with water for a couple hours a few times a year? What if copper only had to be exposed to sodium percarbonate for 15 minutes twice a year? Any risk of damage?

Part of the reason my dad bought his last house was it had copper gutters. These we’re probably from the early 50s.

It wouldn’t have any lasting damage.

If clean any contact areas though, and rubbing it down with a vinegar and salt cleaner wouldn’t hurt!

I don’t have any copper to test on. Let me know how your test go. I will go buy some copper but I suspect it to have a different effect on weathered copper.

I usually take advice from Facebook groups lightly but I posted this same question there since nobody chimed in here. Everyone (4) says SH will not be a problem. Pre and post wet/rinse. I’ll proceed cautiously and do a test spot on the back side of a down spout and report back my results here.

A: The most common cleaning method is to add chlorine, a corrosive agent, to water. Adding free chlorine appears to affect iron pipes the most. Chlorine also appears to have an effect on copper and lead, but it may or may not increase corrosion with these metals.

The table at the bottom might be of some use?

I read SOME good advice on FB groups but it’s highly dependent on who is giving it. The numbers of clueless on there is amazing!

Yep, same here. I don’t visit the groups as much as the forum so it’s kinda hard to tell but my bs detector is decent. These guys seem legit.

Dude that looks amazing. I hav not done any decks but that makes me want to start today!

So do you recommend mixing sodium percarbonate in a bucket then pouring into a sprayer?