Show me your gnarliest roofs you've ever done

So I had a roof today that I knew was gonna be gross. But I didn’t know exactly how bad it was until I actually got up there. It took me 2 55 gallon batch mixes at 4% and then I was still working on it with a pump sprayer because it was so matted and thick at the end because I just didn’t have enough product to justify filling another drum or half of one.

Show me your worst roof mamma jammas and how you tackled these bad boys. I almost feel like I should have broomed or maybe tried to blow some stuff off first. I told her I’m going to need to be back again for a second round at least and we need to see how this all shakes out. 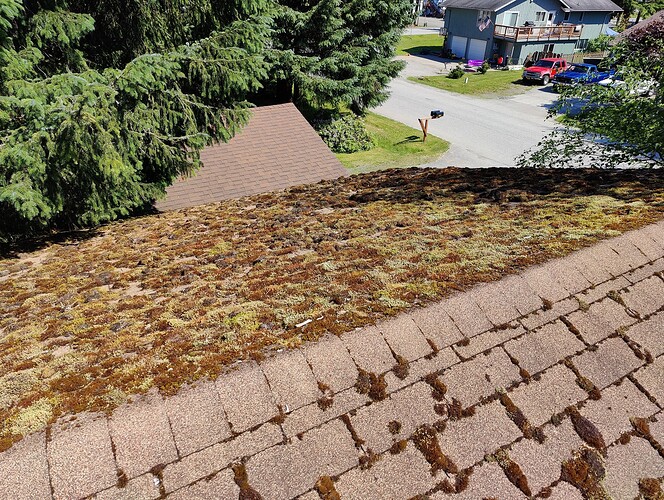 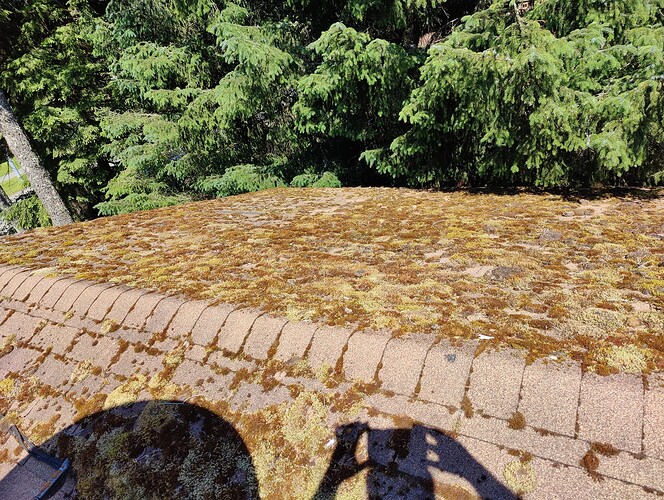 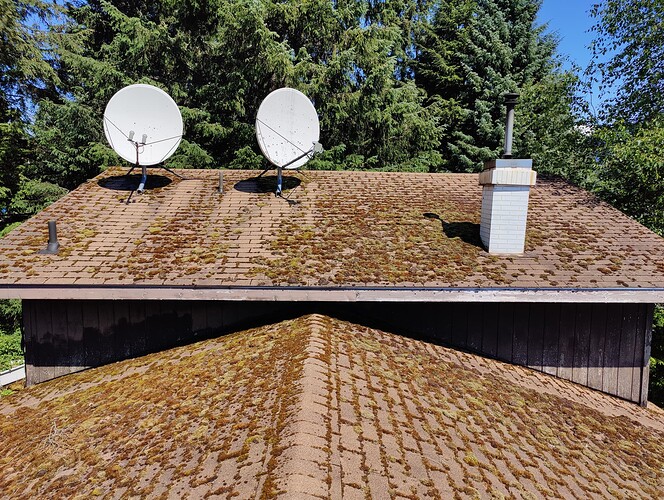 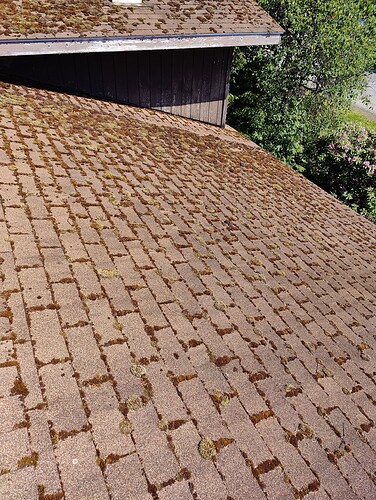 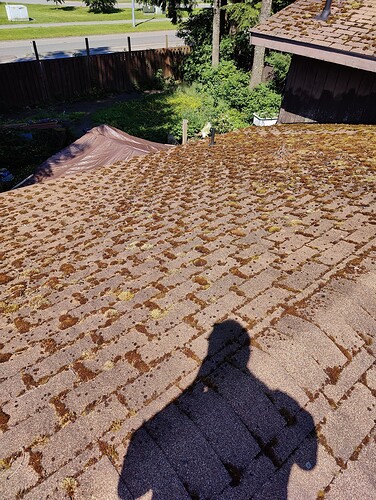 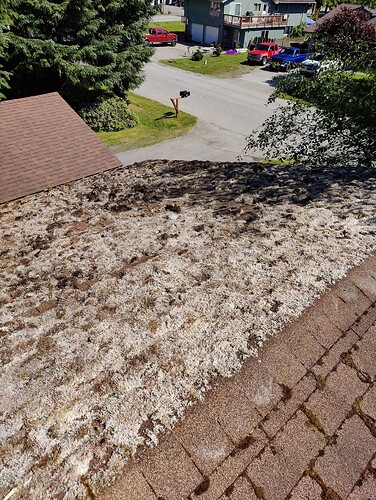 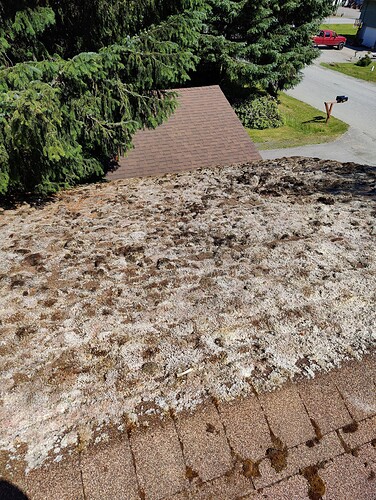 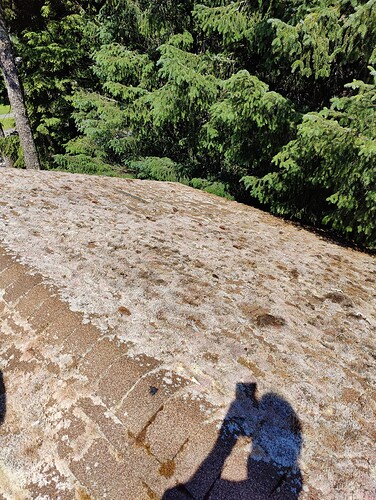 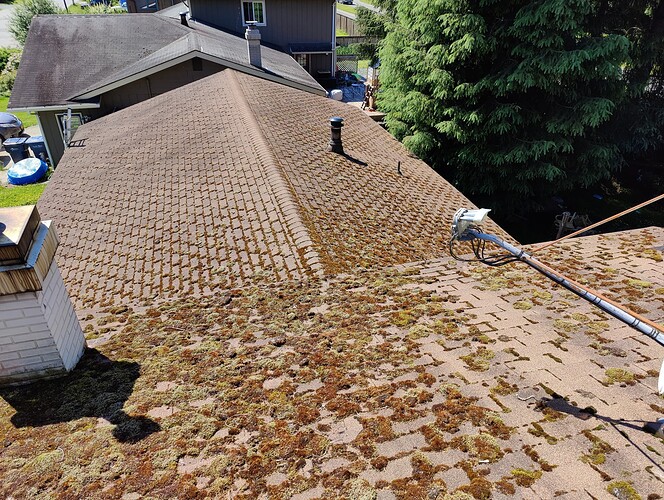 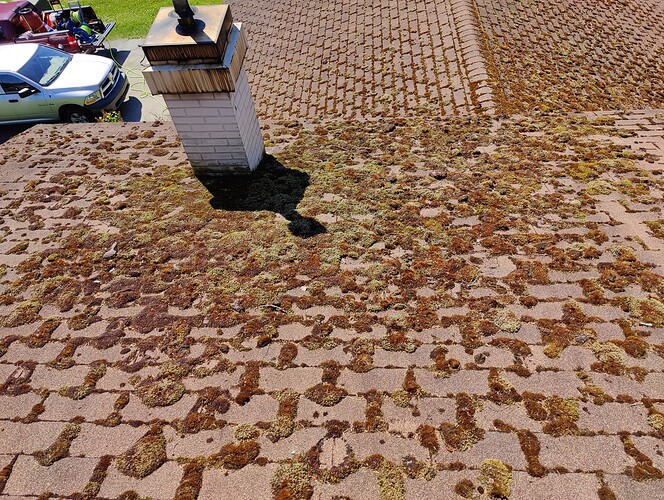 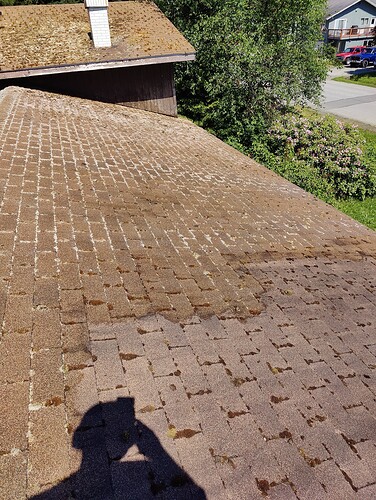 Damn that is gnarly. Ive never had a tough roof like that but a driveway i did two weeks ago was very similar. Used about 10 gallons of bleach but the worst part wasn’t getting it off the pavement… it was getting the growth into a wheelbarrow with a shovel. My surface cleaner wouldn’t touch the moss and I didn’t want to use my 15 degree nozzle and spray it over all of their bushes… that was a fun job. Now I know to walk away from something like that

That roof is awful though. I might have advised she just replace it but I’m interested to see how this job turns out

Should turn out great. I wouldn’t have set the expectation for a return trip, but kept the possibility in mind myself. You spray it, and check back on it over the next few months. You’ll be surprised how well it will turn out.

I did preface the expectation of potentially coming back for a second round with that it would not be for free. That roof was terrible from the ground, and even worse when i saw that far side on the 3rd level. It was matted like a blanket. I always laugh at myself for carrying 30 extra gallons of costco bleach and now i know why. For the times like this. Luckily i actually made money but i spent over 400$ on bleach alone on this house.

That will work. Just figure out your pricing increase for moss/heavy moss, and charge it up front. Do the job, and set the expectation that the moss will take up to 4-6 months to fall away naturally. This is what’s best for their roof, removing it will do damage, on some level. Then retreat in 4 or 6 months if it needs it, at no additional charge. Otherwise, they might be OK with the mostly done job (even though you will never be happy with it) and not want to pay to have it touched up to look it’s best. Work your way towards charging what it takes to do a job that you’ll be proud of, and come back 2 or 3 times to make that happen if you have to.

Good lort. That must have been a nice ticket. I’d say chances are good it’ll need a return trip to get it 100% but looks like you got most of it white so it should bake off.

I say ask someone before you do something stupid like that again. Take a medium stiff broom and brush off all the clumps first. Doesn’t take much to knock off the clumps. Then you spray it ,collect check and go home.

LOL, up there, the snow melt next spring should bring most of it down.

I’m learning…trial by fire all the time. Ive researched the heck out of stuff but still gotta get my feet wet and make some mistakes (hopefully small ones)

This roof convinced me to get a smaller Stihl leaf blower. I don’t particularly like getting into and off of roofs with my Stihl br800. Go figure!

You’re still going to need to brush it first.

Should I wait a few weeks for the rain to do it’s thing or get ahead of it and start brooming it off sooner rather than later?

You can wait a few weeks, some of it will come off, but realistically as thick as that was, may take 3-6 months for it all to come off. You can take and hit with a medium pressure fan spray, say a few hundred psi or use pretty strong garden hose nozzle spray, and knock off some of it in a few weeks and then re-treat what’s left. Spray down the roof, not up.

Did you pre-wet the roof before you did? Didn’t look like from the pics.

I didn’t pre wet. Outside temp was 70s if that matters, considered a real scorcher here

You pre-wet to make more absorbent, unless it had rained a day or 2 before. Think dry sponge. when you first run water on it, doesn’t absorb as much. Once you get wet, it’s more absorbent… Same as when you’re watering a plant that hasn’t had rain for several days. When you first water, most of it runs off. If you come back and hit it again, most the water will be absorbed,

Thanks for that information! I will use that in the future. The good news is it was so matted not much seemed to drip off as there was so much to absorb

You want it to absorb down to the roots though.

Gotcha. Will do next time!

Hey Muscle, I read somewhere a couple of days ago your government was getting ready to tax the cattle farmers over there for excess carbon release because their cows fart a lot. Is that true about the tax?
https://www.downtoearth.org.in/news/climate-change/in-a-first-new-zealand-proposes-to-tax-farmers-for-livestock-burps-83225#:~:text=New%20Zealand%20will%20tax%20burps,will%20be%20taxed%20from%202025.
PS: You’ve got a bunch of sheep over there. 26myn.