My tech was cleaning a house that had some really bad growth on the backside and right at the bottom of the wall was 6 delicate plants. He was aware of them so he pre-wet the foliage, pre-watered the soil really well and then washed off and watered them again really well after applying a 3% mix, they all started dying over the course of the last 2 1/2 weeks and I got a call yesterday from the client. I told them I would pay for replacements but I’m wondering if the the soil need to be changed also? I told them to water the crap out of them but I’m concerned the soil is contaminated and new plants would die just the same ?

I wouldn’t spray anything above 2% on a house save for some gutter spots or mud dauber nests. 3% around delicate plants is insane. They’re already shocked and it seems like they’re being over watered. Replace the plants but the soil is fine. SH is just salt after a few hours

I never go above 1% for houses, never needed to. Hitting it twice at 1% works perfectly fine on even the worst houses. 3% around delicate plants is asking for trouble every time.

It probably wasn’t vinyl that @Seandz was washing.

No need to change the soil

Perineals are delicate, too sensible, too much heat, cold.or water or lack.off and they die.

I always tell my clie ts that i will do my .best but they will most likely die…
They know they are sensible and you just told them that you know what u are.doing.

You can always upcharge for them, just in case, but it will be xheaper for them.to replace

I’ve only washed houses since march but I have never killed a plant since I started. That being said when I’m not washing houses I’m reading/watching how to wash houses and not destroy property. Might have rearranged some monkey grass with my hoses but I don’t really see a point in washing a house if it means dead plants? Pre + post rinse always works for me. If I’m really nervous I’ll spot spray some bleach wash if I have to hit a wall through some roses. That or use a spray bottle of 2% to control the overspray. I tell all my clients their plants will NOT die

Won’t say “will not”, because it happens on occasion…flowering things can be tough, hydrangeas really suck, but they rarely die, just brown and wilt a bit if anything. There’s Plant Wash and other products designed to provide needed nutrients to help them through the shock and all…but noticed this week that we appear to have quit using it, and have had less plant issues (like zero) this year, Maybe guys were relying that too much, and now they’re just watering better…

Sean, Go buy a couple of bags of garden soil and replace. This place getting like FB with some of the comments made. 3% bleach is often used as permanent (non toxic) weed killer as is salt. With salt, which is also used as a long term weed control, it destroys the soil structure and is also mobile, which means it can migrate to nearby areas.

I never go above 1% for houses, never needed to.

You are so, so lucky.

I’d rather see 3 applications of 1% than turn the dial up…fortunately with DSing, the guys will do that before they’ll go back and drag out the chem hose to apply stronger mixes… as usual, @Racer is 100% correct on the salt thing…historically conquerors would sow salt to prevent re-habitation of conquered enemies’ cities. If it was a contained system, it could easily have concentrated in a small area of soil.

Historically for us is the other day for Rick

Sh can and will neutralize soil. Thats why the plants die weeks after. When you dig up plants replant them with a good planting mix. The soil will recover. Even if this is not necessary it will definitely not hurt. You want to be the guy that fixed his mistake. Not half @$$ fixed his mistake. 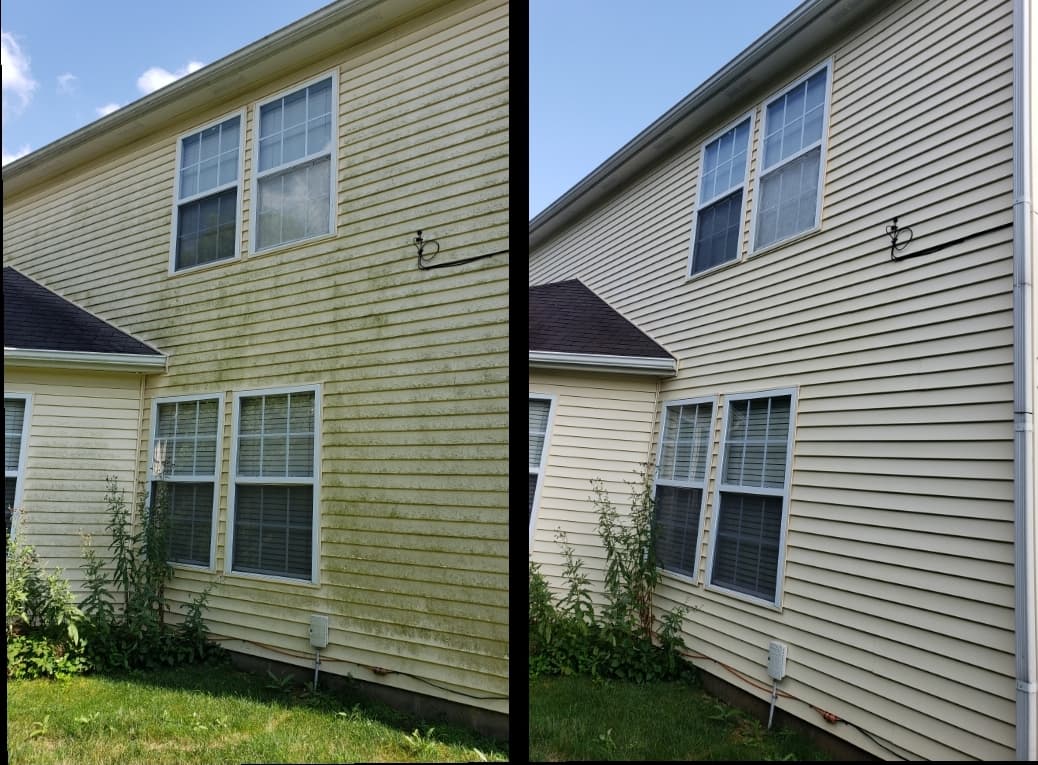 Most of the house I do look like this. 1% was plenty strong and took no time at so. I normally use about a 0.6% for house washing, probably 80% of the time. I rather go weak and hit it a couple times than risk killing anything. 5 years now and to my knowledge I’ve never killed anything.

I know one thing for sure, if you kill the plants the weeds will grow better.

I use salt in my gardens to kill weeds but it doesn’t hurt my plants at all. You’re right though nothing wrong with replacing the soil, it is the safe bet and the right thing to do. I just can’t imagine the tech sprayed that much SH on the plants and in the soil as I use a 1:1 rock salt to water mixture to treat weeds. I’ve tried glyphosate and chlorothalonil but that stuff is straight poison. One thing i’ve learned is that once you turn 18 you either inhale toxic fumes or stare at excel 8 hours a day

Tried that, gutters here are highly resistant to multiple applications of housewash.

Quick brush of them is easier I think….

Gutters are another animal, Gutter Butter (or I think I read LA Awesome somewhere) and a quick scrub takes care of that. Can’t determine housewash mix based on the bad gutters, it just doesn’t make sense to me

I use sh to kill grass and weeds here in Florida. Sometimes works better than weed killer and has longer effect.
To he safe, I would replace some of the soil when I replace the plants. The clients will love you for it.

Thanks everyone. To clarity a few things for the new guys, he was cleaning highly contaminated stucco on a tall 2 story house. Usually 2% and 800 psi does it but this was real bad and getting to the top with pressure was un-realistic. The very delicate plants were planted right at the bottom of the wall. It’s interesting to learn that simply overwatering them could cause them to die as well. Moving forward we will make sure that this kind of thing is taken into consideration and a conversation is had with the client. I’m not even sure using plant wash before and afterwards would’ve solved the problem. Hearing about it still dying two weeks later is definitely a bigger issue that obviously sometimes cannot be worked around. I’ll take the advice and go get some soil. It’s a matter of when not if something like this happens. In my first year, I repainted a car on a commercial roof job and spent $1000 on plants at a Martha Stewart style home after doing a tile roof wash and discovering at the end that the client had removed the downspout and all the 6% mix went straight down into they’re ridiculously expensive 15 to 20 year old established plants in the front of the home. I also replaced $3000 of windows one year with my sign business scraping vinyl off causing scratches. Ish happens which is why we can’t give away house washes for $99. It’s all about how you handle the problem after it’s happened, because it will happen. This is business, and we all have bad days from time to time. Appreciate everyone’s input!