So my pump started cycling and I went to look at it and its really hot. Pumps aren’t supposed to run too hot to touch on a cold water machine right?

Do you still have the red shipping cap on? Is this a direct or belt drive? Is your buffer tank return line functioning properly?

Buffer is functioning properly last I checked. I didnt check right before I turned it off. Direct drive. Red shipping cap, the one on top? If so I did. I just took the oil out and it has metal fines…could I have done something wrong on the install? I put it on a 12.5 hp workhorse, but I had to buy a shaft adapter as the pump is a 1 1/8 hollow and the motor is 1". It seemed to fit just fine though…

That red cap is to keep the oil getting leaking out during shipping. Don’t run it with it screwed in.

Show how your it’s connected to your tank. You have a bypass going back to your tank right?

Well I feel stupid. So I should unscrew it every time, or just leave it off?

Thanks a bunch for the quick help guys! Hope it didn’t ruin my pump!

I only know about the red cap because I just found out about it after Russ at Southside pointed it out to me. The pump kit comes with a yellow dipstick so try and find that. I got lucky and found mine.

Mine didn’t have a distinct in the box, likely because it has this view glass?

Mine came with these 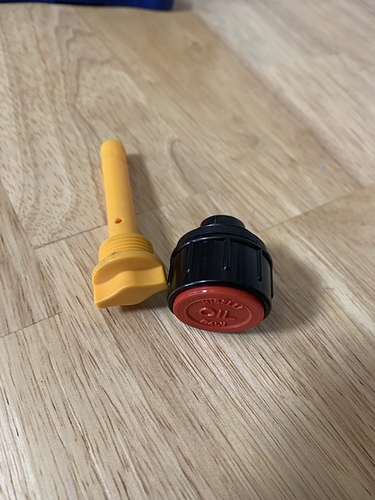 Yeah, here’s what mine came with too. 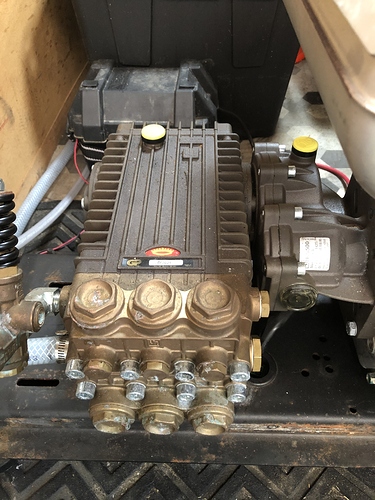 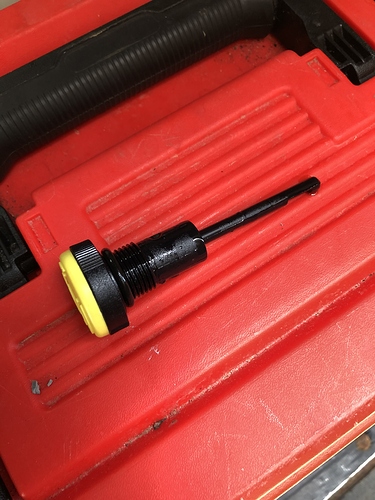 They’re vented to keep it from pressurizing. Wish I had know that.

Do a bucket test without a nozzle to make sure your machine is actually pulling sufficiently from that tank.

I used a direct drive for a few months and while it worked fairly well, it did make interesting noises trying to draw from my buffer tank. I suspect your pump isn’t getting fed very well.

@dcbrock, @Max1, thanks guys, long day so just now getting on. I did a bucket test and was pulling about 4.5, but when I use my feeder hose alone for a test it is well over that. I will have to check it again as somehow my unloader was turned way down.

Which I found out when I doing a preasure test while I was trying to diagnose everything.

If my hose is putting out more than 5gpm but my 5.5 gpm pump is only getting 4.5, (again, need to do another bucket test) then I guess its search time. My hp to gpm/pressure should work, so we will have to see. Ill update once I have a chance for another test, unless yall think its something unrelated to everything mentioned. (The metal fines concern me) I will say once set my unloader again it was working oh so much better, so it might be ok now.

What is the science behind direct drives not pulling and belt drives pulling anyone know?

Is it possible to convert a direct drive to a belt then?

It’s possible, but why? So much easier to just buy what you need from someone that has already worked out all the kinks.

I would convert to a gear drive before a belt personally.