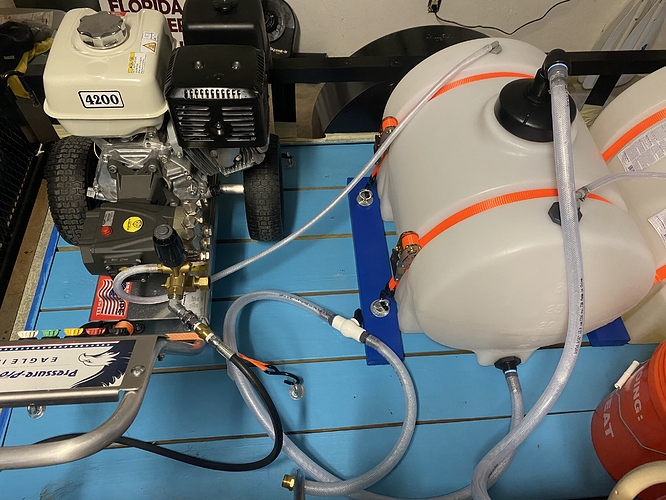 I appreciate any help and thanks you for reading!

You can get a gear box for $300 from Russ at south side. Highly reccomend the upgrade

As far as adding a gearbox to a direct drive @Bigbendwashpros I don’t think that’s possible. Gear boxes have female openings on the engine and pump sides. The pump’s shaft slides into the gearbox. Same goes for the crankshaft on the engine. A direct drive pump doesn’t have a shaft but rather female opening. Plus, direct drives are setup to run at max engine rpm’s. Pumps used with gear boxes run at 1750 rpm’s.

Got the wrong hose for water water supply to your washer. Those braided hoses collapse and can causes a lack of water flow. Get this one. 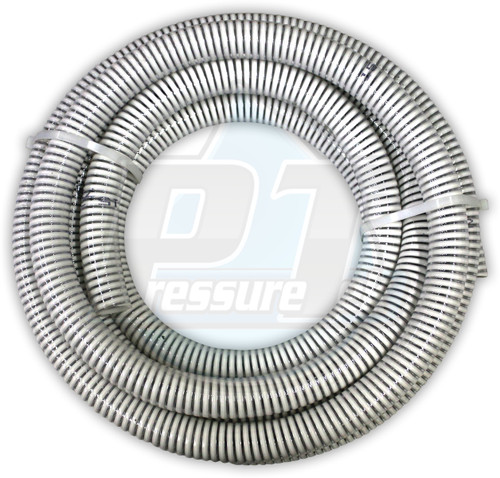 I have just about the same set up. I upped the bulkhead size to 2" coming from the tank. Then 2" pipe to a reducer to 1" and used the hose previously stated. Non-collapsing hose. The only issue I’ve had is from draining the tank to much and an air bubble gets into the pipe. Other than that, works perfectly.

Can’t see if you have one, but make sure to have a filter on the supply hose.

I hate to be the Debbie Downer here but I want to shoot it straight. You’re going to burn that pump up in no time. The pulsing you felt is your machine starving for water (you already knew that part) and that is going to irreparably damage the pump’s manifold. Inside the manifold is a series of plungers and seals. When the pump starves for water it sucks in air. The air causes cavitation in the brass manifold where the seals seat in there. Eventually, (read: soon) the seals will become so chewed up that they will no longer form a seal against the plungers and you will lose all pressure. You’ll likely crack one or all of the plungers as well.

If you want to run a direct drive that’s fine. Hook your supply hose directly to the machine. You can still bypass to your buffer but you’re going to overflow it at some point but that’s not really a big deal.

Or, run that pump until it dies, and it will, and then take the money you’ve earned and slap a gear drive pump on there and roll on.

It appears your not getting proper tank ventilation.

The way you have it set up will never work long term and will be problematic. You’ve plumbed it to pull water like it’s a belt drive or gear drive, direct drives need a different approach, on smaller tanks with less capacity you need to have it raised above the pump inlet to increase pressure to feed it to compensate for the weight of the water with a larger tank. 1 inch hose should be minimum and fitting coming from underneath the tank not the side, a slight lean on the trailer will starve it every time.

Didn’t notice that it was direct drive as I would have mentioned the above too. So yeah. Fix that lol

You can get a gear box for $300 from Russ at south side. Highly reccomend the upgrade

I ran a 4/4 off a 50 gallon leg tank for a while. At first I had it below the water level and it ran fine doing that, but when I had it parallel with the bottom it didn’t sound very happy…wasn’t cavitating but definitely a strained sound.

Fixed all that with a gearbox and pump.

Can you not just slap a gearbox on a direct drive pump? Nevermind, just read the thread. Also don’t think it’s too necessary to have a buffer here in town @Pau1 I think I’ve had a problem with Only one water supply not being strong enough this season and they were on well water down in woodville

Can you not just slap a gearbox on a direct drive pump?

Show a bit of respect to us geardrive owners.

I’ll have you know as of last week I am a gearbox owner myself, except fedex lost the pump I ordered with it

Well obviously I got a little carried away and missed some crucial stuff in regards to the kinds of pumps. I did some reading about gear drive pumps as y’all mentioned and see that I absolutely need a new pump to make the buffer tank set up work (Along with a lot more reading.) I think everyone’s points were right on the money. I’m gonna go ahead and get the proper suction hose for when I can afford a new pump (after a few paid jobs) and I left enough room on my trailer for a larger buffer tank in the future.
As @Bigbendwashpros mentioned I don’t think we’re I am located I will have issues with water flow for a 4gpm machine so for the time being I’ll have to hook up the pw directly to the supply line until I work a few jobs and can make the necessary improvements.
Honestly, thank you all very much. As I make my final push in getting ready to take jobs, this forum has been invaluable in setting me straight when my head is spinning from everything else I’ve read on the internet.

Someone mentioned above that all you need is a larger buffer. If you could find a vertical tank you’d be fine and wouldn’t need a new pump until you’re ready to upgrade. I don’t think it looks the best but somebody on here had a 55 gallon drum for a buffer. That would get you enough pressure from gravity feeding to where you should be fine. An ibc tote would be even better and you can usually find them used for $50. Just don’t travel with much water in it. You’d need a dual axle to do that. @Patriotspwashing runs some direct drives and doesn’t have issues. He’s runs a few trucks and crews too.

It looks to me like your tank outlet is below your pump inlet (on a cart), definitely starving for water.

Just take the skid off the cart. that will lower it 4" and help some.

Im finally getting around to making adjustments after giving everything a trial period so asking on an old post to follow up. Tired of overflowing the buffer tank

exactly like y’all said.
I want to take my pressure washer off the cart and mount it directly to my trailer. Can I just remove the cart and use the existing bumpers to mount it or do I need to get a proper skid plate ordered/welded to fix it to my trailer? I’m sure mounting to the wood floor of the trailer is not ideal but could it work with bumpers and washers?
The manufacturer said this model can’t be skid mounted or taken off the cart which is why I’m asking here. 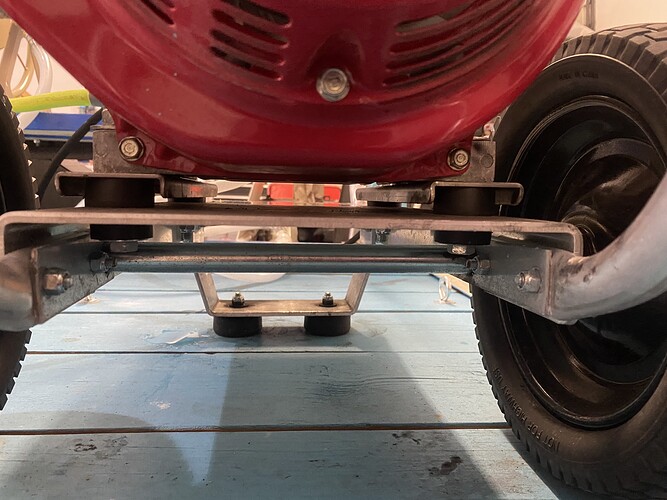 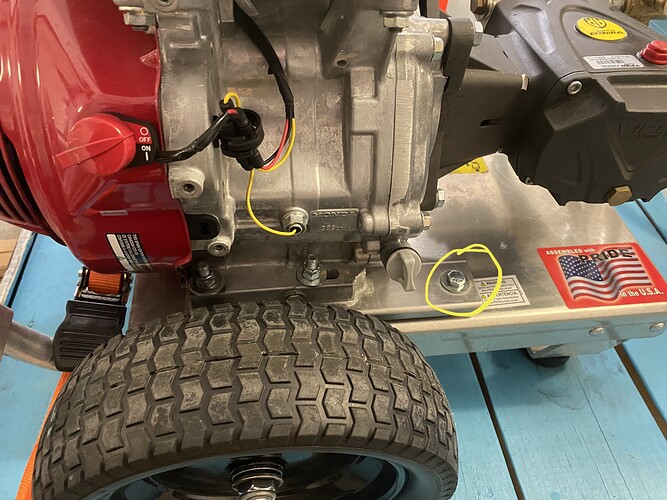 There’s no reason you couldn’t pull that machine off and mount it to a skid. You could also mount it directly to the boards but you will not like the result. It would be wobby on those rubber feet, lots of vibration, and it’ll tear those boards up by the middle of March.

We mount them to plates or skids to spread the vibration over a larger area. Personally, I’d take off the four bolts (not the one you circled but the ones holding the motor to those rails), mount the motor to a nice 1/4" or thicker steel plate 18x15 or larger, with four AC unit vibration dampers on the underside. Bolt all that through the trailer with backing plates on the underside and blue threadlocker on the bolts.