Pressure gauge blowing water out of the top. There was a rubber piece that looks like it probably was meant to add oil into the gauge but it keeps blowing out any idea? 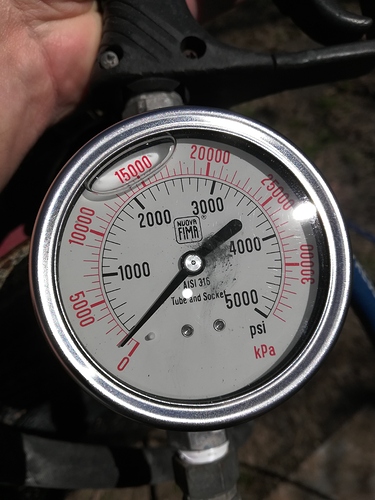 The blow out plug is there to allow excessive pressure to have a way to relieve. What psi is the gauge and your machine?

It’s the second one that has done this could it be an unloader problem?

I have one I use with quick connects, I don’t see the need to run one permanently

@Chesebro Who does see the need to run it permanently?

You dont need it you are just wasting your money. I’m sure that gauge is not ment to spike all day.

Many guy’s run these mounted to there pumps… Full time…

I dont know anyone who runs them full time. Pressure checks are on Monday along with other equipment checks.

From this day forward, in the land of the PWRA, I christen you as…The Nozzle Whisperer

I’m known by friends and family as the cat whisperer, nothing more

The other day my tech noticed a big drop in pressure. When he called I told him to put the pressure gauge on just before the gun and see what the psi was. By the time he found it and installed it, the machine had a chance to take a break (had been spraying yellow tip mostly non-stop probably close to 5 hours) when he tested it he said it already felt better but it was only putting out 2600. The machine is 3000 and usually after 200’ of hose it’s at 2800. The gauge is missing 3/4 of the oil as we cut the rubber tip off months ago and it’s been floating around the cab leaking here and there. Do you think missing oil like that could have it read less than is coming out? He tried changing to a brand new tip and the psi was the same. Also, the newer machine (hydrotek scx30008) only has less than 400 hours on it. It is powered by a kubota diesel motor, has a general pump and k7 I loader. Do you see the pump or unloader wearing out that fast? 90% of the time it’s running with just an m5 twist nozzle at 500 psi… the oil in the motor and pump were almost completely full and the 200 gallon buffer tank was full to the brim. The inline filter was also just cleaned that morning… it’s been staying at 2600 psi all day yesterday too.

With a fresh nozzle and weak spray I wouldn’t be looking at the pump or the unloader @ 400 hrs. See if your rpms walked out of spec on the engine. Check and see if the pump belts are snug too? They could be slipping if you never readjusted them after they broke in and stretched. See if they slip any on the the sheaves by pulling them by hand.

Thanks I will check it out. Doing a full maintenance schedule service this weekend

@Seandz It just struck me today you MAY have been the guy that kept running his machine dry and letting it vibrate. Welp that would take out hp seals sooner than later. Did you ever find out what was up with your machine?

It’s only ran dry for a split second maybe 10 times. Each time that has happened we immediately turned it off until the buffer tank refilled. It does vibrate a bit but that’s because it’s a kubota diesel motor. It’s a hydrotek scx30008 skid mounted to a bigger custom skid we fabricated in the back of the truck, I’m getting used to sensing the subtle signs of it running out of water. I think the big well water job we just cleaned with for 60 hours scaled up the burner. Going to clean it out and see if it helps. Good memory man!

So to make sure I understand by a “split second” you mean someone was standing next to the engine and shut it off or you noticed it ran dry and you quickly went back and shut it off? Because if it’s the later that means you’ve run the pump dry for 15-30 seconds around 10 times? I would imagine that’s not good.

We let off the trigger immediately and then run back to turn the engine off. It still bypasses but the only somewhat good thing is that it’s not actually totally dry. My 200 gal buffer tank always still has 2-3” of water in the bottom but it sloshes around a little bit and so sometimes air mixes with the water and sends air through especially while bypassing shooting it back into the buffer from the top. No longer are we playing the guessing game of when to turn the water off and run it out, we wait till pretty much done, and then run the machine for about 10 mins to spray 80 gallons out rinsing the truck off and watering grass or whatever. Rather waste a little water than waste a pump!