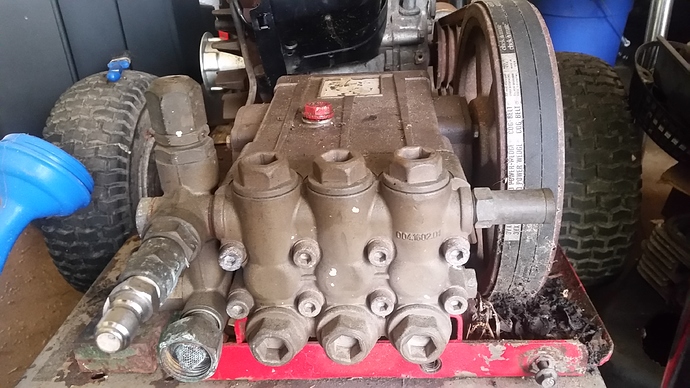 I tried to measure the pump shaft but things are a little Hammer mushed on that end. 3 belt pulley. It 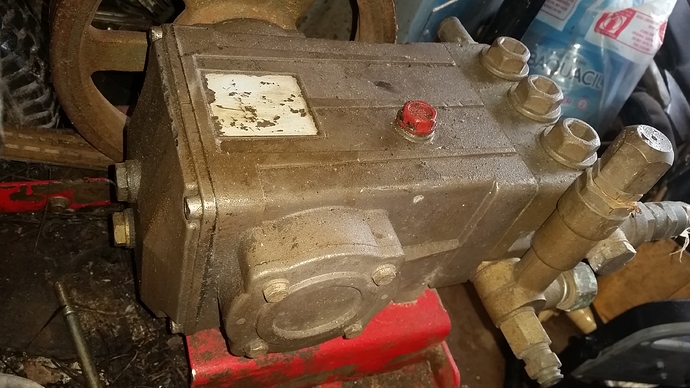 Shaft probably 22mm. This is a simpson water shotgun, all I can find is that is could be a comet pump and 3000psi. Looks like an old generalpump tho.

Thank you for the supply RedJess. Here is a picture of the data tag but I don’t know what the 3500 means. I 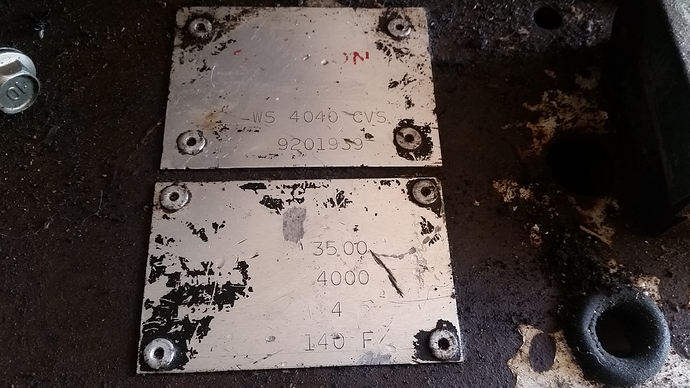 By tag specs, looks like 3500psi 4000psi max maybe. But #4 nozzle. If I had to make a guess off the model# I’d say 4k psi and 4gpm. Whatever s paired with that hp is usually pretty decently rated.

Thank you again Regice I guess my next move would be to send photos to General and see if they can identify it.
One hundred plus years ago, equipment companies were so proud of their products, they affixed them with an ornately beautiful cast brass tag. Later they went to a stamped tag of sheet brass. Next they went to an aluminum tag, and finally a vinyl sticker!

I got nothing. Sorry

Thank you all for the help. I’ll send photos to some manufacturers I guess. I was kind of hoping it was a new door from some comments I picked up on another Forum about how good they were. But it seemed like they were pretty happy about generals too. 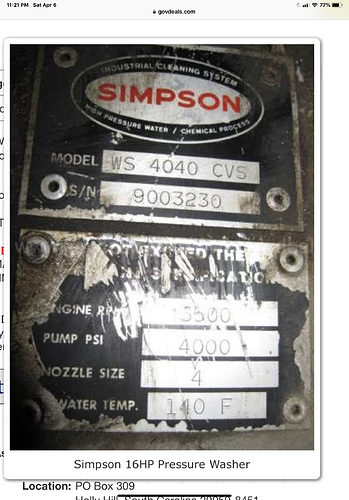 I can see the past…

Most every one I’ve found online has a CAT pump, but all painted different colors, red, brown, blue…
Kinda odd.

Shinedup you are amazing! I thought you photoshopped that missing data in there till I realized it was a different serial number.

Some info Ive read only refers to generals and cats being on these. And bases on all the pics Ive seen does look like a general pump, all the others were cats.

Thank you Redjess,
So am I reading correctly that General pumps are generally considered durable and easily and affordably rebuildable?

General pump is the industry standard.

If you read Consumer Digest, Behr paint and stains are the highest rated among consumers. Is Behr the best product? Not by a long shot. But Home Depot and other box stores carry it and it is heavily advertised so weekend warriors buy it. No paint contractor will use it because their reputation can’t afford the call backs. Vendors put general pumps on machines because they are cheap to acquire and gaurantee future revenue because they have to be constantly rebuilt.

Thank you for the reply innocent bystander.
Your point is well taken and you could very well be correct. But here is the other side of the coin.
I didn’t get the information from Consumer Reports, I got it from pressure washing forums. Ostensibly from guys that use them and know them. Now you still could be correct.
Maybe all the guys I read were “weekend warriors” who had no idea what they were talking about.

On the other hand, you could be dead wrong. Because by your same logic, I could proclaim that Cummins turbo diesel engines are junk- but Dodge, Peterbilt, Freightliner, Etc only use them because they are cheap and need to be repaired all the time. I might even throw in some anecdotal evidence about guys I know who have blown them up. But love them or hate them, anyone who knows diesels knows there’s a lot more to be said about them. There’s quite a few of them that haven’t blown up. And not a few have logged more than a million miles with very little trouble. And even if someone is a Powerstroke or Duramax guy, they would likely give some respect to the long track record of the Cummins.
I admit I know next to nothing about pressure washing pumps. And it’s not my intent to start a flame War here. I appreciate everybody’s participation and generous sharing of information. Thank you all!