I found a new hose supplier if anyone is interested. I’m not sure if anyone has used them before mainly because they haven’t been making pressure washer hose for that long. I guess they started out making hydraulic hose and supply Caterpillar. They make quite a few different types of hoses. They have distributors out there but it’s cheaper buying straight from them.

I can’t really say a whole lot about it since I just received 225’ on Monday and it hasn’t had any long-term usage yet. Although, I also have a brand new roll of 225’ two wire jgb hose and this new hose is definitely beefier and a little larger in diameter. That tells me it either has a thicker outer rubber coating or the inside has a larger diameter. My guess it’s just thicker which means it should last longer. I did weigh the two and the jgb is about 8 pounds lighter for the whole 225’. I paid $315 for the 225’ of JGB and the hose from The Hose Company I paid $330. The two wire is $1.35 a foot and I think the one wire is $1.22 a foot. They shipped for free which put it right around the same cost as JGB. I’ve heard JGB can be hit or miss so hopefully this will be a good second option.

The hose itself is called Hydrauli-flex. The two wire has a psi rating of 7615 and a burst pressure of 19,140 psi. The one wire is 4350 psi and burst rating of 10,875. They can custom make anywhere up to 500’. They were awesome to deal with. Called and told Scott what I wanted. Was emailed a Paypal link, and paid via debit card.

The reason the jgb hose is black is they sent the wrong color. I told them gray on the phone and a few emails. They wanted me to send it back and pay the $100 shipping fee and they’d send me the right hose. I told them if they’d email a return shipping label I’d get it back to them. I haven’t heard back from them and I emailed a few times.

Anyways, hopefully it ends up being good hose. They’re currently out of 2 wire because a distributor bought up something like 20k-30k feet but they have plenty of one wire. He said it would be about a month before they are able to make enough to replenish their stock on the two wire. 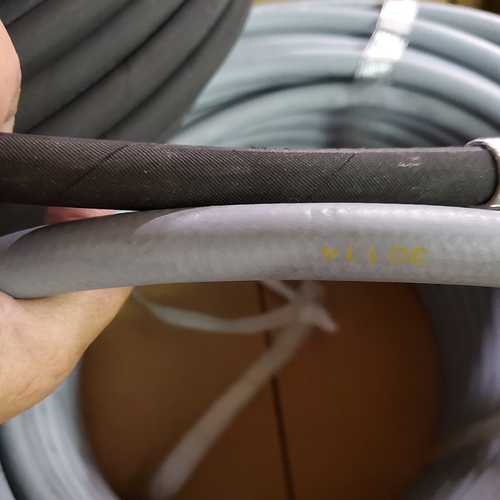 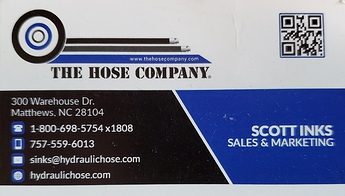 You got 1 wire. It doesn’t last as long. I bought one wire from jgb a few months ago and it was $215. Some use 1 wire cause they say it’s lighter but I can’t tell much of a difference. Plus I thought the 2 wire might be better with the hot water.

Some use 1 wire cause they say it’s lighter but I can’t tell much of a difference.

I’ve got 150’ of Continental 2 wire, smooth black cover and I definitely don’t like dragging it around a house lol.

Plus I thought the 2 wire might be better with the hot water.

@marinegrunt Your post might be right on time for me. I blew my 250’ overpriced United hose yesterday and need to replace. I called the Houston branch of JGB today as it’s closer to me than the others and spoke with Mandi. $165 for 200’ 1 wire gray, $41 for 50’. She estimated $75 for shipping.

I’ve decided to copy IBS and attach a 50’ after the 200’ since mine always blow at the whip near the gun or within 20’ of the whip.

I may have to call Scott. You and @Infinity have both received the wrong color hose from JGB.

You and @Infinity have both received the wrong color hose from JGB.

‘Tis true. I’m giving JGB another chance, though. I just ordered another length of 225’, along with a couple 15’ sacrificial whip lines.

How did they handle it when you got the wrong color? Did they pay return shipping either by reimbursing you or emailing a shipping label?

I just kept what they sent me. Seemed like too much of a hassle to return. They didn’t offer to pay return shipping.

I got blue, not black, which wasn’t so bad. I would’ve been a little more peeved if I had gotten black.

Yeah, they tried getting me to send it back on my dime. Not that they pushed it but they just said to send it back and they’d send the right hose. I just emailed back saying if they send a return shipping label I would. I sent a few more emails and haven’t heard back. This was from the St. Louis store. I ordered one wire from the New York store a month or two ago and, a couple emails and days later, the hose was delivered on my front porch. They St. Louis store just sent the hose and never got my credit card info so I think they’re just dropping the whole thing.

I’ll keep the post updated on the Hydrauli-Flex hose from The Hose Company. The two wire definitely looks to be better quality than the JGB but only time will tell. Some guys have had their JGB blow out within weeks so I’m hoping this hose will be a better option. The one wire I got from JGB is still holding up fine but it has only been a month or two. I ought to buy a hydraulic crimper and just turn the 225’ of black hose into whip lines and sell them on here at a discounted price…lol. It would probably pay for a good chunk of the crimper. I’d love to have one.

Hey thanks a lot for spreading the word. The reason our hose is a little bit heavier and thicker is because we use a heavier gauge wire when we wrap it which makes the hose more durable. We aren’t some hose made in China. We wanted to produce a good hose that lasts and can be used for all situations while staying at a reasonable price. Our hose has a Higher psi and is rated for higher temp water at 311*. Feel free to reach out whenever you guys need anything. I have hose for pretty much all your pressure washing needs. And if I don’t I try to do research to find it for you. Thanks again

Just talked to @Scott_Inks and ordered hose! Great guy, easy to work with, can’t wait to get them setup and try them out.

I’m here for you buddy. Just let me know

It was definitely a simple process. When I ordered I talked to Scott and told him what I wanted. Shortly after I got an email with paypal link. Was at my front door in like 3 days. He also doesn’t mind text so will be able to just shoot a quick text when I need to order again. I hate talking on the phone so that’s definitely a plus for me…lol. Quick and painless.

Thanks for the info Brian!

Watch it Garry. Anyways, I only eat the red ones.

Thanks Scott, received my hoses yesterday.

Did you get one or two wire?

I got 1, honestly didn’t even think about that