I washed a house last week. Some of my run off ran down the asphault driveway and dried causing lighter colored runs. The home owner had recently had the driveway seal coated so the stains appear more obvious. I’ve never encountered this problem. Simple fix would have bee to rinse my soap before it dried.

This is a pic of it after scrubbing it with a light degreaser mix and another scrub of my house wash mix. It bleneded a little. 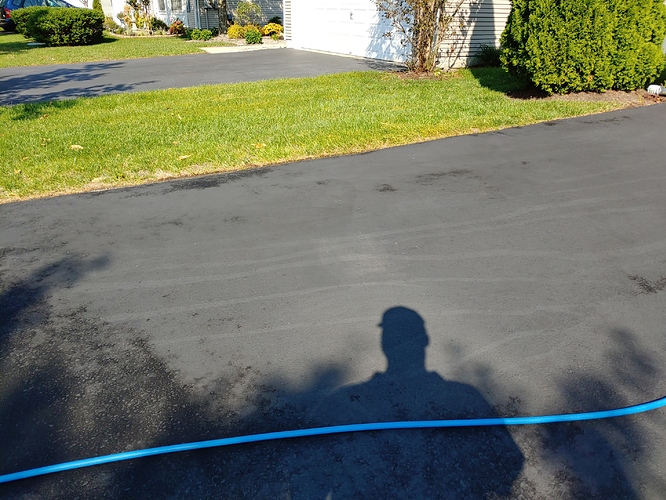 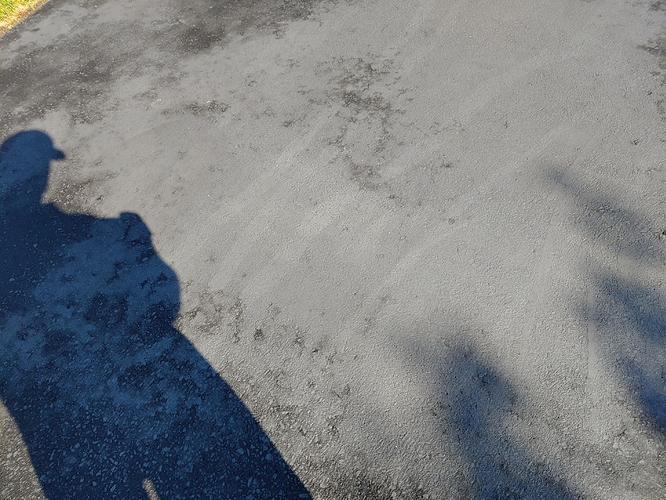 I used a high pressure tip with no luck. I did one more scrub with a degreaser because that seemed to lighten the most. I left before it dried. I hope it dries better than the above pic.

I dont think that a degreaser on asphalt is a good idea because it’s petroleum based. But im also just drawing at straws here.

They’re going to have to live with it…or you’re on the hook to recoat it.

As @12_B said, you never want to use a degreaser on asphalt. Also, SH on asphalt is no bueno. You also have to be pretty careful when using agitation on asphalt especially, like in this case, when it is fresh. That seal coat has not fully cured and you just hit it with two chemicals that do not agree with it and then scrubbed it in. You definitely should’ve rinsed it immediately with low pressure high volume. I have no clue how you would go about “fixing” that now other than to reseal it again.

It looks like the chemicals took the coating off. So it was probably sprayed on very thin. You cant fix it
Only choice you got it to call seal coat guy maybe he will give you a break or do it yourself

@DisplacedTexan I think the sealcoat is a month or two old. I know not to use a degreaser but I have nothing to lose because if it doesn’t come off I’m having it sealcoated again anyway. I was hoping a degreaser would be aggressive enough. It didn’t appear to effect the asphault or the sealcoat. I even brushed it and nothing. The stain looked less obvious when I keft so hopefully she is happy.
How much is a sealcoat? Internet says about .25 a sq ft. That seems pretty cheap.

Seal coat cost will vary depending on your location. You can probably get it done cheap since you can do the prep work. Never know might turn into a good thing I do a fee a year for a local company when they have big jobs.

I was commenting in another thread and I remembered there was a lot of oxidation in the run off. That may have made it worse and why I can’t get it off. Almost like dried paint I guess.

I guess if you’re already decided on resealing if it doesn’t turn out right then go ahead and try the degreaser (which you did). But for any future readers let’s just be clear that degreaser and asphalt are a no-go.

Those are some weird looking run lines

They almost look to uniform (just from the picture)

Usually run lines pool out, those look like 1 inch lines all the way through.

Although it doesn’t matter, is there any part of you that thinks it might not have been you?

It’s hard to see in the pics but they aren’t uniform. It’s definitely me. I can see they start where I stopped rinsing the soap run off at the top of the driveway. If I just rinsed a little more I would be good.

I had something similar happen to me recently at a condo I was working on. One of the residents complained about streaks on the pavement after I had pressure washed the gutters and soffits. But after a week or two and some rain showers I drove back by and the streaks were gone.

@Greg82264 thatbis what I am hoping for. I lightened them some and hoping nature will do the rest.

Go back after a good rain.

They should be gone.

What if you try vinegar? Theres the regular 5% and a pickling 8 or 9%. Or if you want stronger go the home depot/lowesa/nursery and they usually have a 14%(something like that).

Maybe if he had left alone, but after all of that, not so sure.

@Clean_Blue are really going to wait isnt your reputation worth more than the cost of that drive way sealer. I would bet you that fact that you went and resealed it will go a long way in that neighborhood.

If she isn’t happy I’ll take care of it but I’m not going to volunteer to have it sealcoated. As far as her neighborhood goes I don’t even usually travel that far. That’s what is killing me. Driving back and forth and making no money. It’s got to be done but if this was in my area it would be less of a headache.

@Racer I was thinking the same thing, I would have to love to wait for the rain and I even mentioned it to the customer but I could see she was getting worried I wasn’t going to do anything. She’s older, paid already and I didn’t want her to worry she was going to get screwed. There is no real rain in the forecast any time soon.