Some claim running my motor and pump@ 3/4 throttle will cause damage. I find it convenient to run at 3/4 throttle draws more chem DSing, helps with reducing pressure on my WW SC. Then I can just go wide open as concrete jobs change w/o changing nozzles. What are the real damages am I facing. GX690 8gpm udor.
I’m open to buying another smaller pump if it’s necessary too.

I realize they are designed to run W/O

realize they are designed to run W/O

That just answered your own question 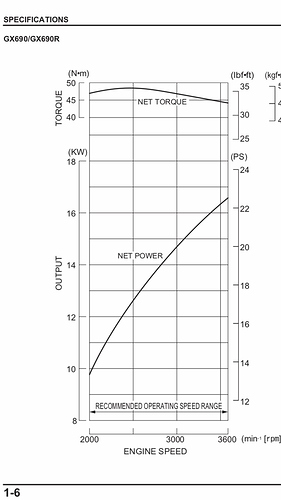 I don’t know what effect it would have on the pump, but won’t hurt the engine.

Probably won’t hurt the pump, but it will destroy an engine

Why would the Honda website say 2000-3600rpm is normal operating range?

Why would they put a throttle lever on the engine?

Why would you question what high paid engineers, in climate controlled rooms, with no regard to the whims of internet shade tree mechanics. Air cooled engines are designed to run WTO. It doesn’t matter to me what someone does with an engine they paid for, but a question was asked and I have a correct answer.

To warm it up,and cool it down

What high paid engineers are we talking about. There are plenty of air cooled engines that run well below max rpm at times. Older four stroke dirt bike engines for example. And Honda does specify an rpm range below max rpm, and the highest torque is generated at well below max rpm.

Agreed. I’ve got one for ya. Lucas oil stabilizer in small engines. Good or bad?

and the highest torque is generated at well below max rpm.

Or Change the sprockets on the engine and wheel for high torque at lower rpm,or vise versa

This and ball valves are about the only thing major that Innocent and I disagree on. Unless I’m doing concrete I run mine about 3/4 throttle all the time. And I let it warm up and cool off at about 1/3 throttle.

I know you don’t

If this engine were on a lawn mower cutting high grass, I’d agree that wot would be best. The load against the engine wouldn’t change . In the case of a pressure washer, as you decrease the rpm, the load on the engine in turn decreases. And regardless of gearing on a car, motorcycle, etc, it doesn’t change the the rpm at which the highest torque is generated by the engine. You think that by changing gearing the Honda engine will in turn produce more torque at a different rpm? Not a chance.

Verbosity on your part doesn’t change the fact that your wrong. Me explaining more or saying it differently isn’t going to help you understand. Do what you want with your engine. Air cooled engines are made to run WOT. Why argue something that is concrete. Argue about which glue dries faster or which dog food makes your dog fart more.

I was not referring to lucas in general,my bad. My question is I guess. Lucas,stp,rislone etc. AKA ,Motor honey,to stick on cold starts. To thick to run ? Or just over priced gobble goo for small engines ?

Argue with Honda, they’re the ones that specify an acceptable rpm range. I’ll go with Honda over you any day