Fix a pump & Build a pump

Hi guys, new here. I’ve been looking around for a while trying to get some opinions and answers. I am certain someone here can help a brother out. I have two questions with similar topics.

First order of business. I lent my PW to a friend. He ran it without cheking the oil level in the pump, ran it dry and now, I get water inside the pump housing. I took the housing apart as soon as I noticed. The pump is a CAT 3DX29GSI. Should I repair or replace? I don’t know if replacing the inner seals will do the trick. Any info would help.

Second question. I was fortunate enough to come by a whole home generator for $300. The generator only has 30+ hours on it and most are from the regular maint, it wasn’t run a lot. Since I don’t need the generator, I was planning to remove the power head and sell it separately. Planning on keeping the Honda GX620K1 engine that ran it. It is a LPG or NG engine but that’s not a problem. What I would like to do is build a pressure washer using this engine. Could anyone suggest a pump to mate with this engine? The engine is rated for 20hp but running on LPG, I think it more like 18hp. Still considerable. Also, I’ve seen some portable commercial PW’s that have a nice aluminum “dolly”… Is it possible to purchase one for DIY purposes?

The generator engine probably has a tapered shaft. Not going to be easy to mount a pump or pulley or anything really.

If it has a tapered shaft, there are adapters available on ebay, pretty inexpensively. Make your own dolly with aluminim sheet.

The generator engine probably has a tapered shaft. Not going to be easy to mount a pump or pulley or anything really.

Based on the limited research I’ve done with that motor, I think you might be right. I’m going to take the generator head off the motor today, I’ll confirm later.

Regarding making my own dolly, I would rather not. I know its possible to buy an aluminum one online, I just haven’t found where. I may not be searching using the proper terminology?

I found this site;
http://www.watercannon.com/p-2748-v-belt-drive-cart-cool-deck-lifetime-aluminum.aspx

A little pricey for just a frame but its a nice frame.

Well I’m not 100% certain, but i think the dolly youll need for that size motor needs to be wider than the 13hp variety because itll be top heavy(er). Anyone know?

I believe this is 1, take note of sizes. 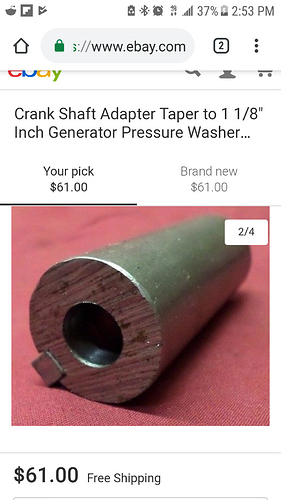 Almost a 100bucks for almost another 5inches in length. But I see theres no difference in width, so no tipping worries.

I tried taking off the armature from the generator but its stuck on there tightly. I pulled the long bolt out from the center of the gen head so its not that. I will have to tap the end of the armature. Put a threaded rod down the middle of the armature and thread a bolt in the end to force the armature out. Sorta like a reverse puller. I’ll link to a video below to demonstrate what I mean for someone who may need it in the future.

That cat pump is a small one.don’t know what all you using it for to say if it’s worth the rebuild.the parts are expensive.you could shop around online to price the parts separate.I rebuild a bigger one b4 but only because I paid such a small amount for the machine.truly depends on how much time you got compared to money.

I’m thinking to spend the money on a new pressure head. I’m really just looking for a recommendation for a pump replacement and company that’s reputable. I’m thinking of getting another CAT pump but would consider something else if you guys can recommend another pump.

Most likely it has cracked plungers maybe one or more.just gotta break it down and see.go from there plunger price vary.if you using it for around the house a general pump or something equal will do.

One of the three plungers are cracked. It’s a think, hairline crack but its deff cracked and obvious.

Replace plunger it may work.I’ve done it b4 and pump work fine

So, it is a tapered shaft. Not sure of the dimensions, It’s dark out now so the pic is crappy. Will try to find more info in the user guide for the engine. 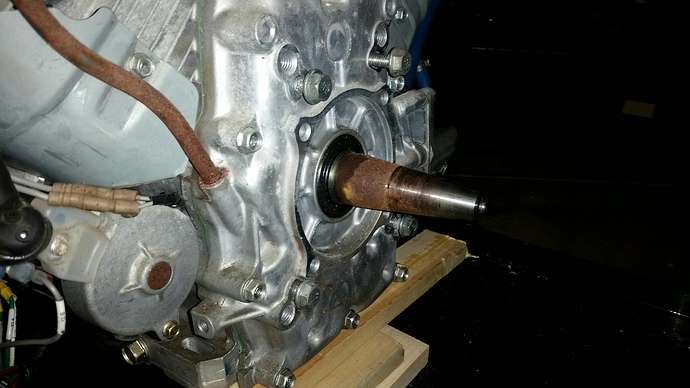 As has been noted several times already, the tapered shaft will be fine, you just need to get a shaft adapter.

Could some help me please identify the engine I have or explain to me the difference between the GX620 and the GX620K1. The engines serial number is GDABM-1000388. Next to that is a series of letter stamped “VXC” with a fourth letter that looks like an “X” and an “I” over the top of each other to make what looks like a star. Cannot figure out what im working with here. Any clarification would be tremendously helpful. I’ve attached an image of the stamped serial. The first few letters are hard to see but it is as mentioned above. What i’m curious about is the VXC* 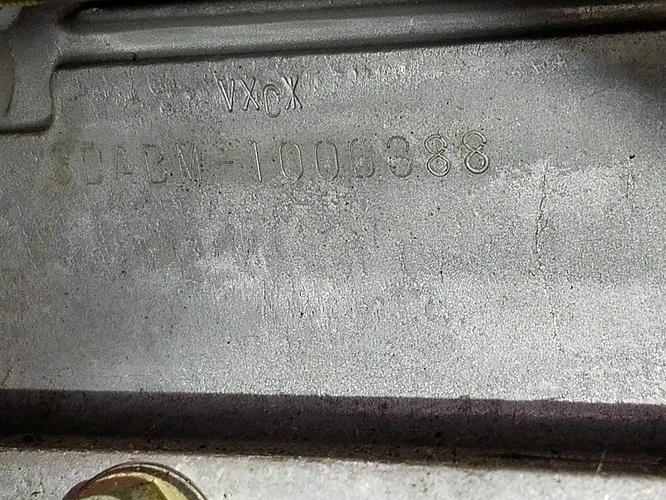 620k1 looks to be used on john deere products…

I just want to say 95% chance that. That’s the bigger taper vs the smaller taper on the smaller generators I’ve got a propane gx670 that has super low hours. I ended up buying a gasket kit and crankshaft for it. I’m going to stuff it into a club car carryall golf cart eventually.
When I was looking up adapters last year they didn’t fit my gx670 taper. So I just bought a replacement crank for 100 bucks

After doing some looking around, it looks like its possible to get a crank with a straight shaft. I would really prefer not to crack it open and instead find a pulley with the taper. I’ll try to get more info on the taper. I’ve never worked with a tapered shaft, new to me. I’ll try to get some dimensions of the taper tomorrow and post them up.