I showed up to a commercial job this morning to remove rust on painted hardiboard (?) I’m using oxalic acid and water. No fancy stuff on this one. It worked beautifully, but I had apply… and reapply… and reapply. Anyone ever use elemonator (or whatever your surfactant of choice is) and oxalic acid?

Any weird reactions? The apartment complex just found 3 more exterior fire sprinkler heads with the same rust running down the exterior siding. It’s new construction, not even finished yet, and the paint is less than a month old.

Normally I would just test a spot, but it’s not easy as the lower half of the building is stone veneer. I’m not doing any pressure washing on this one. It’s all accessible from a balcony so I’m working from a service cart and a backpack sprayer to rinse. Actually kind of a nice change.

I love F9. Loooooove it! insert Drake song lyrics about my love for F9. I’ll send you pics when I get my lazy butt up to grab the phone off the charger, but I already used 30 gallons on Oxy/High quality H20 mix today on two MASSIVE rust stains on a concrete curb and asphalt.

One was 4 parking spaces wide and ran the width of the parking lot from some weird dump valve type thing on the exterior of the building.

The other was from a dumpster that ran about 40 feet long and 6 feet wide.

Long story short, I’m not paying for that much F9 when the customers primary focus was the leaking fire sprinkler rust (there were a ton), and the concrete and asphalt they just wanted “lessened”. I also don’t have time for it to ship. They want the other 3 finished tomorrow before their “regional VP” leaves.

I use a oxalic acid as well. Same type of application. I would worry about loosing strength in the mix. Aren’t most soaps basic by nature. But then again just up the acid in the mix and it should even out but be less viscous and not run of the surface as quickly.

I’m not worried about losing strength. Just a funky reaction with the paint. Do you use a surfactant in yours for any vertical surfaces? 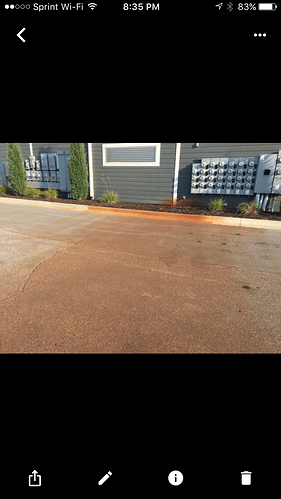 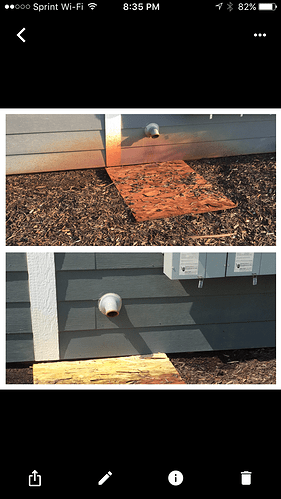 Is that rusty water from the pipes? Wow, that’s nasty. 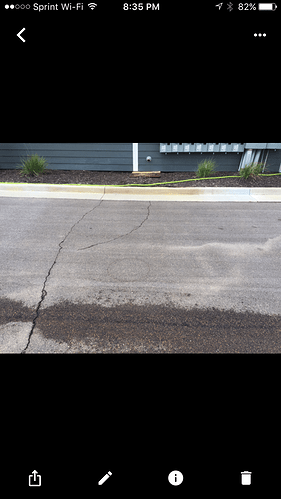 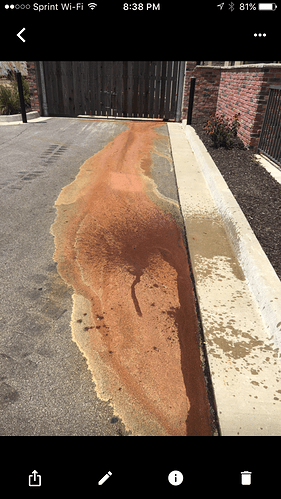 Yeah. My phone isn’t letting me upload all the photos.

So those are the stains you used F9 to remove? I’ve been wondering if oxalic would work on that extensive of a stain. I am working on a driveway with a large rust stain this weekend and will try it out. OA seems much cheaper than F9.

I used oxalic on all of this. Normally I use F9, but I made a friend locally here with another pw company, one of the few good guys around. Anyway, he really likes the Rust Remover + from Powerwash.com.

I’m going to buy 5 gallons and give it a shot on the next one. 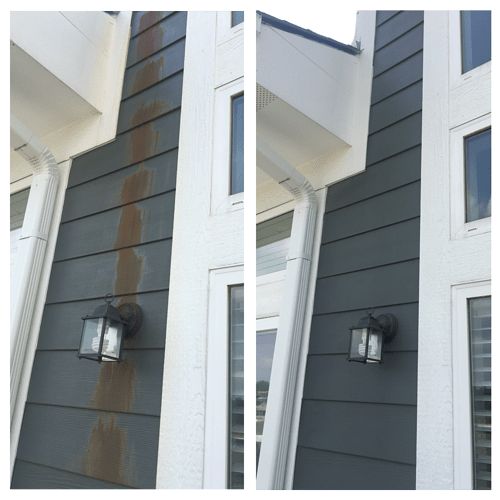 I just went with it. 3 oz of Elemonator to 4 gallons of oxalic/water. 2 passes. No funkiness happened for those who may ask in the future.

What in the world was causing that rust from up there? Did you paint it to stop it from happening again?

Got it, that’s a shame, but hey more work for you!

10 pounds of the powder costs like 25 bucks… What does 5 gals cost?

5 gallons of F9? $150. I had 30 pounds of oxalic powder. I can usually stretch a 5 gallon bucket of F9, but I would’ve needed 15 gallons for the 1:1 necessary on this job. That’s why I went with straight oxalic. It’s been a day and a half of rust removal and I used 34 gallons of mix. Still have some powder left over.

That’s what I was saying. I’m not buying F9 for this job even though I think it works a bit better than oxalic alone.

@squidskc are you mixing your ox with warm water? I’ve had a couple of stains this year my ox would not completely remove. I never had a problem before. I thought maybe it wasn’t mixing right. I even bought a new batch because I was worried it was old.

@Clean_Blue Never not once ever. The only difference in warm water versus cold water is another 60 seconds of stirring from what I can tell. F9 is just faster and more of a complete clean in my experience. No real measuring and mixing either. Just eyeball half and half in the pump sprayer.