I’m not one for figures, but I’ve mailed out a really slick marketing piece over 4,000 pieces, most addresses delivered twice within week to same address, with 1250 to address only once. I FINALLY had a call yesterday and sold a $1375 job. Other than that, I’ve had 1 phone call.

I’ll say it again, thank goodness for HA. I spent about $50 for leads yesterday and did $625. I MAY be able to pay for this epic fail with the money I’m making with HA. 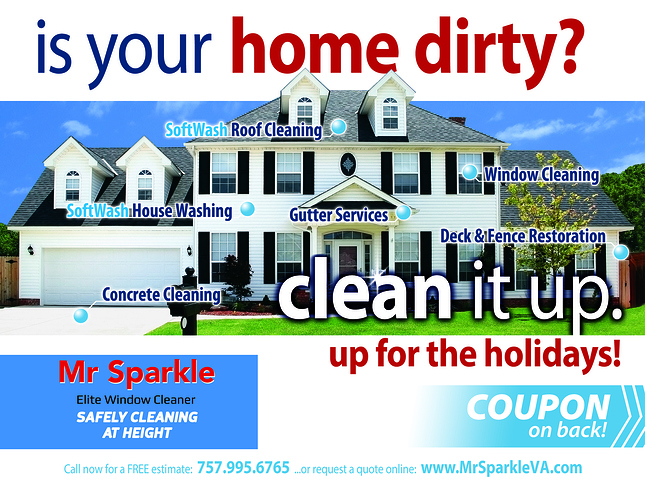 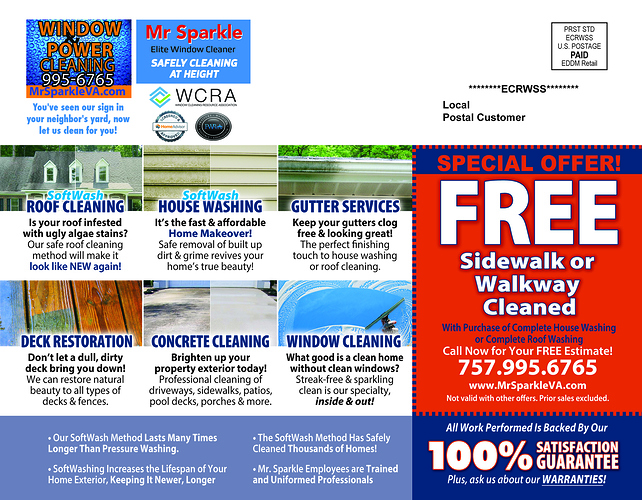 I won’t be wasting my money on any more postage. I’m giving them out to my HA customers to give to their neighbors who are simply AMAZED at the fine cleaning job I accomplished.

So what did the EDDM cost you with flyers and postage?

I bought 5000 from AtCostPrinting (love those folks) for about 10 cents each. Postage costs $.177 each. So I have about $1200 in what I’ve mailed and about another $100 in cards that I’ll give out to my new customers to share with their friends.

My next printing purchase will be for door hangers like Brodie suggested that I can put on homes 5 on each side of the home I just completed.

How long ago did you mail them out? If it was in the past week or so could just be a timing thing with people focused on the upcoming holiday.

How is this a Fail?
If im reading this right you sent out a few cards then a week later sent some more and now only on week 3 or 4 of waiting. Flyers, eddm, door hangers dont work like that. You cant say something didnt work with just a small test.

Dont send the second flyer to the same houses within a week of each other, give people time. “experts” say around 6 week send the next one. People may not be ready now and will hang on to the card. Ive had customers call a 6 months to a year later on an older card.

Although i dont use (or like HA), they are good in regards to being “instant” money. Some one is looking for a particular services that you offer. They are a warm lead. Flyers, eddm, door hangers, are cold leads, so you are using a shot gun method with flyers. Send out a lot of cards and hope you hit something. With that comes a higher up front cost. You have to be consistent and put out way more than 4k flyers. People will hang on to them and may call later.

I will say this, next year i plan to send out a lot more eddm, but im also going to be doing another form of flyering for a 3rd the cost of mail. My eddm cards cost about the same with print and mail being around $.26 a card

Also its timing, its winter right now, so call slow down in general.

I was instructed to send them out twice to the same address within about a week. 1/2 I did, 1/2 I didn’t. My one response that resulted in a job required the second mailing. She saw it the first time, he the second. He gave her the card and instructed her to call me.

Eddms seem like might work in the long run, it allows people to familiarize themselves with your company name

Eddms seem like might work in the long run, it allows people to familiarize themselves with your company name

Yes…and it will work with the right demographic…which I don’t have.

First, I dig the new profile pic! Second, it doesn’t sound like this was an epic fail, or a fail at all. You have a roof job tomorrow from eddm for $1375. You have about $1300 invested over the last couple weeks. So you broke even so far. Mailers are definitely going to take time, especially with the holidays coming up, people don’t really want to spend money if they don’t have to. They will keep your info. I’d say after new years, hit those same neighborhoods. I’m sure you’ll get more calls before then as well.

First, I dig the new profile pic! Second, it doesn’t sound like this was an epic fail, or a fail at all. You have a roof job tomorrow from eddm for $1375. You have about $1300 invested over the last couple weeks. So you broke even so far. Mailers are definitely going to take time, especially with the holidays coming up, people don’t really want to spend money if they don’t have to. They will keep your info. I’d say after new years, hit those same neighborhoods. I’m sure you’ll get more calls before then as well.

I agree…and tax refunds will give people some extra money.

with the holidays coming up, people don’t really want to spend money if they don’t have to.

The delivery route I chose has average income $175,000. I doubt if those folks stress the holidays. No, I’ve had two phone calls and one sale from 4000 cards delivered. My expectation was for a 1% return, and even a 1/2% return would have resulted in 20 calls. 2 calls from 4000 cards is a failed campagn. Certainly after a year or two and familiarity with my brand I would get better results but at a huge cost.

I know that I personally act on a direct mail piece or I throw it away, so I’ll be surprised if I get any more calls.

You are still looking at it the wrong way.
Just because people have a little money doesn’t mean they want to give it to you. Especially right now, you are competing against the biggest competition right now: HOLIDAY SEASON.

Just because a family makes $100k + a year doesn’t mean they dont stress about money. Some of the people in the biggest houses have no liquid cash because it all goes to their huge mortgage, and car payments, plus insurance for everything under the sun.

Just because you read some where you can see 1/2-1% return doesn’t mean you will especially with only one mailing, it takes time and one small test of 4k cards is not going to give you those result immediately. The main reason tracking ROI on flyers is somewhat difficult is because people may not call until months later on an older flyer when you have a new flyer out. So determining the ROI for each flyer can be a challenge. I average about 1/4% return on some of my eddm flyers and i know some guys who are even lower. Mine could be higher seeing as i still get calls from old flyers. Different areas will have better or worse results, dont just go based on how much the family income is. If its an area where the people make a lot but dont give a crap about how their house look then you wont make any money. Find places where the homes have well manicured yards and landscaping and that have aggressive HOAs.

Like i said earlier flyers are cold leads, plus it cold outside dont expect the same ROI in the winter as in the spring. I understand the frustration, but also know flyers are a numbers game and takes time.

@MrSparkleVA
George,
Take it from the man himself. He who built his business on EDDM @Chris .

Bullets and then Cannonballs | WindowCleaner.com

One of my favorite books is Good to Great: Why Some Companies Make the Leap…and Others Don’t by Jim Collins. It talks about the theory of firing bullets and then cannon balls. I recommend you read this book at some point. But to give you a quick...

Your disappointmemt is understandable but dont get too discouraged for then your power will be meager when you will need it most - to direct towards more positive action.

Your disappointmemt is understandable but dont get too discouraged for then your power will be meager when you will need it most - to direct towards more positive action.

Nicely put my friend. I DID, get another call from the mailer for a $149 window cleaning that I hope to upsell. Her husband owns a construction company so something COULD come from that as well. I’m busy as a one-armed paper hanger, so whatever else happens is good. I won’t abandon the EDDM unless HomeAdvisor keeps me too busy. Right now that is the case, with 5 scheduled for Fri. and Sat.

This brings up a good point. What is an acceptable ROI on active marketing? I used to think that 1000% was my target since I wanted to spend 10% of my revenue on marketing (as a maximum). Now I’m realizing that I get better than 1000% on passive marketing (past customers, or being found by people already looking for me), and I can’t find a darn thing that get’s over 400% return on cold leads (active marketing). Yet, at the end of the year I’m only spending 3 or 4% marketing. So I’m thinking maybe 300% is acceptable (spend $1000 to get $3000). It would give me some things that are scalable and can produce growth among new clients that will be cheaper to harvest sales from in the future. Maybe even 200%???

I consider my wife a typical Mom that opens the mail for the family. Any valu pak or advertising mailer that comes in immediately goes in the garbage, unopened. Local glossy magazines with advertisements might get a quick scan for deals but they go in the trash. She has a list on the fridge of who cleans the carpet, plumber, guy who pressure washes the house, lawn guy etc. She got most of those thru word of mouth and friends referrals. I mailed out some cards a long time ago but had better bang for the buck with knocking doors.

The challenge with door knocking these days is the number of people that will not answer the door. You can see them sitting in the house but they just won’t answer. It can be very frustrating.