Do I have a unloader issue?

I start it up, as soon as pressure builds in the pump and line the machine cuts off. The pressure is so much I cant releaae the trigger on my gun. I have to slowly unscrew the hose quick connect from the unloader setup to kill the pressure.

It looks as if its failed at bypassing the water. I tried taking off the unloader on another washer and put it on, but the friggin bolt was so rusty that it broke so now I go from having 2 working unloaders to none!

Sounds like it. Is the unloader set to bypass just a trickle when on the trigger? Did you use the right tip to adjust the unloader?

Good question. So the pressure washer is used it had roughly 1100 hours when I received it and I had never messed with the unloader as it worked great so Ive never adjusted the unloader.

No sadly. Income isnt where it should be right now so if one of hoses burst Im usually lucky if I have another on hand. I do have an unloader coming from Amazon tomorrow so hopefully Monday Ill be back in business.

Here’s how I set up a new unloader:

Install plugs and whatever fittings your particular setup requires. I use quick connects on just about everything but some people like the swivel connections better. Yada, yada, yada. Just set it up identical to the one you removed and you’ll be on the right path.

Once installed but BEFORE STARTING MACHINE, I crank the knob clockwise until it stops. From that point, I back it off ten half-turns. That usually gets you in the ballpark of where it should be set.

Once you’ve got that set, you should probably take a look at what kind of pressure you’re getting just so you know. For your machine, you should have enough pressure to clean just about anything but really what you’re looking for is abnormal pressure spikes when you let off the trigger. A few hundred psi spike over what operating pressure is set at is perfectly normal. Much more than that and you need to do some investigating.

Once an unloader is set YOU LEAVE IT ALONE. You never adjust pressure with the unloader. If you need to adjust your pressure to clean something you do that with the tips you use in your gun or your surface cleaner. Tip up or tip down to raise or lower pressure.

The #1 reason why unloaders fail prematurely is people short-cycling the unloader with quick pulls on the trigger. Don’t do that. When you pull the trigger keep it open for at least five seconds before closing it again. Don’t open and blast for one second then close again because the unloader is still cycling from closed to open and it’s hard on the innards.

Regardless, they wear out and you should always have at least one spare on hand. As you know, you can run the machine without one but it’s not ideal and can cause some expensive damage if done too often.

I also want to add what happened before all this started. I noticed the washer making a scary low RPM sound. So i go over to the machine to switch my chemical hose from my water tank to my chemical and realized my chemical tube filter was STUCK in the exit hole in my water tank clogging it preventing water coming out. I turn my machine off, unclogged it. Put everything back together and started it. It sounded fine when I was holding the trigger but as soon as I let go of the trigger that same low RPM sound where the moter was about to cut off.

As I was trying to get my phone out to take video of what it was doing my hose burst. Up until that point it felt like my trigger was hard to pull initially. So overall it felt like the pressure was surging as well.

If you’re going to use your buffer tank as a supply to rinse your injector I would recommend hard plumbing the line (so it doesn’t get sucked into your supply line for the pump) and installing a three-way valve so that you can switch between pulling SH and water with a turn of the valve. The valves can be had pretty cheap but they are also pretty cheaply made so buy a handful if you go that route. Also, in addition to eliminating the potential blockage issue, you remove the cross-contamination issue when you pull the injector hose out of the SH and throw it into your buffer tank. That hose is filled with SH and when you put it into your buffer tank you’re also getting SH into your pump. A small amount but you really don’t want any more than what is already in most city water. I personally don’t put my injector hose in my buffer tank at all. I have a separate tank for rinsing the injector.

It definitely sounds like the unloader isn’t bypassing. If it’s holding pressure and not unloading it to the buffer tank that pressure has to go somewhere so it blew your hose. The weird noise you heard was probably the pump starving for water. It’ll cause the engine to stumble as it pushes an air pocket through the pump. You should also be able to feel that through the hose as it’s happening. It’s bad on the seals in the pump and the brass cylinders in the pump can get cavitation and cause low pressure issues. It’s also hard on the check valves in the pump and they can get stuck or break and that will also give you pressure issues. With the hours on your machine, it’s probably worth grabbing a pump seal kit just in case you have issues after you replace that unloader. Pumps are simple if you break them down and look at them. Not much inside there to go wrong so when you have issues it should be pretty obvious once you open it up.

Thank you so much youve been a big help!!

No worries man. Hope you get it up and running.

Have you tried a k1 unloader they work great. That unloader does not retain pressure on the line when releasing the gun. So you do not have a high pressure at the trigger. And the best thing they cost about the same has a good unloader.

The color of the tip is irrelevant, so long as it’s one of the pressure tips properly sized for your GPM. I set with greens bc we threw all those tips out when we bought the machines, and green was what the local supply house had in 06 and 09 orifices…

I always use and recommend the red because that’s the only legitimate use I can think of for a red tip on an 8.5/3500. But, yes, it doesn’t matter what color as long as it’s an HP tip.

No, use the tips designed for you machine. There are about a dozen tip charts on this forum. You need a 0050 for 8gpm

Here’s what you want. 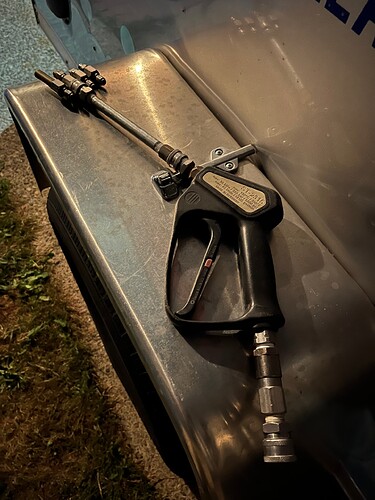 Note the jrod at the end with the various nozzles.

@dcbrock How are you liking that short wand? I know IBS has suggested it a few time but just curious how you feel about it? Noticeable difference compared to just gun → jrod?
Edit: I’m wondering if you are seeing a tighter stream with less drift?

I use the same wand on all my guns, love it…

What if youre cleaning brick or going along the edge on a walkway? Do you wear a fire facemask shield or something? I get messy enough as it is with my 4 ft wand.

If that’s in regards to the wand that dcbrock is showing…note that there is a quick disconnect immediately after the gun and before the 6” extension. This allows for the interchangeability of different length wands.

Note the photo below of how I have my gun set up with a quick disconnect immediately off of it. This allows me to plug in the jrod (as it sits in the photo), any colored tip of my choice, or my wand with it’s own quick disconnect at the end of it. Lots of folks will also modify their surface cleaner handle to accept their gun as well.