Concrete stain after sh and nmd80

So I did a house wash on Friday that invloved some front steps which needed some nmd80 to remove slight stains from the morter that was recently patched up. The bricks were not new. I did the house wash which ran down the middle of the driveway (which was across the whole front of the house) and then I treated with nmd80 and cleaned the driveway right after. The nmd 80 was not allowed to dry on the driveway. The driveway was poured last year, but I only used about 1000 psi on it and moved as quick as I could as it was pretty clean. The owner texted me today and told me there is a slight stain in the driveway that looks like the brick color where the runoff went. I did notice what was likely this stain while cleaning, but wasnt sure as it was slight. Could it be the brick, which is red, or somehow could the nmd 80/sh have affected it somehow? I did pretreat the driveway when I cleaned it and it didn’t touch the stain. Any thoughts on how I can get this up? Pic to follow later today.

Edit-I searched for nmd80 stains and couldn’t find where someone else had this problem.

Do you have before, after and pics of the issue now? Those will help and are needed.

No before, but from now on I think I’ll be taking them. The owner just sent me an after now that its dry, and you can see the kind of slight yellow/orangish lines running through it to the street. The rest was that light gray color. Fiy, the concrete was poured to show the aggregate, I didnt strip off the cream.

Thinking maybe some of the iron in the brick was taken out by the nmd80 and maybe some f9 would take care of it? That is alot of f9 though, so maybe ox would be better.

I would take pics to share. Hard for anyone to help out without them.

Always take before and after pics. Covers you for the work, makes for good advertising, and lets the customer show friends how amazing your work is.

Sorry, I forgot to load the after. 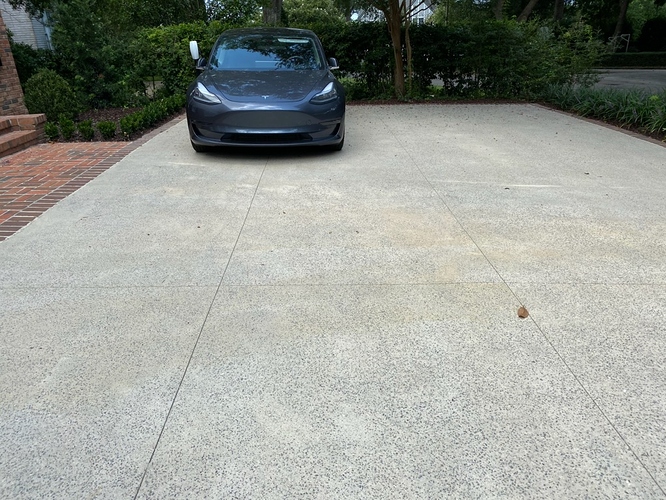 I use NMD80 a lot and it doesn’t leach the color from brick. They wouldn’t sell much of it if it did, lol. You should have diluted it 4-1 prior to use and if you rinsed it well should not have had any effect on drive. It you spill it straight on drive, will create a super clean spot, it’d be white looking.

At this stage, if you can’t prove it was already like that before you started, then you’ll probably need to acid wash those sections.

@Racer, thanks Rick! Do you mean ox acid?

You could try it, I only use Ox for wood. More like f9

I was afraid you would say that.

Thanks for the advice Rick. My budget minded self will try ox first since the stain is so light. Do you have any idea what could have caused it from my washing? I don’t want to repeat this mistake, and I don’t remember it being there before. Do you think it could have been iron in the brick running off?

cleaning vinegar actually worked well. I did a bucket test and the water coming out of my pw seemed rusty or somehow dirty, but my source line was clean. Idk, Im eyeing buildind up a replacement fund to build a belt drive as those seem hard to mess up and they will pull water in, which I didn’t understand before (and couldn’t afford) I have a large job coming up, so if it can make it through that then I should be able to replace it no problem.

@Max1 I did a bucket test of both my supply line and my gpm out of my pw, and supply is getting 7.5 gpm and my pw is putting out 4.2 for a rated 5.5, so Im guessing its as you said that since it can’t pull the water in its having issues with low psi not being able to push the water into the pump. Or, my pump is fried, though it still seems to be getting pressure. (And metal in the oil) as stated above, a belt drive likely isn’t far away.

@Steve I checked my filter and it had a bit of stuff, but very minimal. Not enough to make a noticeable difference in gpm I would think.

You are starving your pump which is a really bad thing. You are likely getting better flowing coming out of your tank when the hose is pointed down towards the bucket compared to when it’s facing upwards to your pump… It’s a really bad idea to keep running it that way your are almost better off hooking it up directly to the spigot depending on the flow.

If you didn’t rinse the driveway after washing the brick house it’s probably just the red brick powder that tends to rinse off of brick. You can usually see it just rinsing a house with clean water.

Oxalic is like 10,000 times stronger than vinegar so, if it did completely fix it, give the ox a try. Could even step it up to some diluted muriatic if you wanted.

@Max1, I upgraded to 1.5 inch lines and cut the skid off wheels to get it closer to the trailer floor. Its still only putting out 5 gpm.

I am also doing a commercial job that has 8.5gpm flow from the connection so with that it puts out 5.5 gpm. I think a belt drive build is in the near future.

@EaCoChem Ok, I’ve tried almost everything on this driveway. Ox, vinegar, sh to whiten it, and nothing is working, except for one spot when it was cloudy and cooler and the sh had longer to sit. Since that worked I came back to try it again and it got more orange instead of whitening it, but it was sunny and hot that day. I called and emailed the NMD 80 manufacturer and they said it can’t stain the concrete orange because it cleans, so if it fizzes on the surface then its cleaning. I did try the nmd80 on an unstained spot at 1/4 and it stained it. I did not let it dry before rinsing, and it stained in 5 minutes or less. The owner had this installed one year ago and said it was never this color, so though the rep I talked too said it must be the original color, I don’t see how that could be. I could try one restore, f9 barc, or hit it with a high concentration of sh on a cloudy day in the morning, but honestly I want to remove the issue, not just whiten it, and Im nervous to try onerestore or f9 barc just to create another issue. The owner doesn’t think the driveway was either stained or sealed, so I dont think its reacting to anything. Please help as this is very frustrating. I’ve been told multiple times nmd80 shouldn’t do this, but it did and I need to be able to fix it instead of replacing a 12 thousand dollar driveway. Any help would be greatly appreciated @EaCoChem. The second picture is my test spot, and while it was still trying you can clearly see the orange spot . Would f9 double eagle be an option to neutralize it? I. Guessing no since there should be nothing to neutralize? 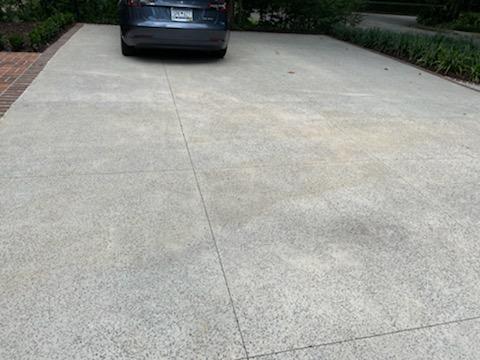 So were you ever able to get this challenge solved? If so, how?

Have you tried to SH the whole drive and surface clean it? Maybe add some straight vinegar to the trouble some spots atop of the SH mix. I think its the brick dust that has just dried and been baked into the driveway and may take a bit of pressure to release it.

@austinb I injured my back before the chemicals I ordered came. I’m going back Monday. Craig Harrison, the owner of f9, told me it burned the concrete as he had seen it before, so I am going to neutralize it with f9 double eagle and then whiten it with f9 barc. He also sent me pages from his cookbook on the process, which is nice. Once I see if it works I’ll report back with pictures. I hope it works because I got nothing if not.