Client had another company out to clean their driveway and this is was the result. Is there any way to fix this? Never seen it this bad before. 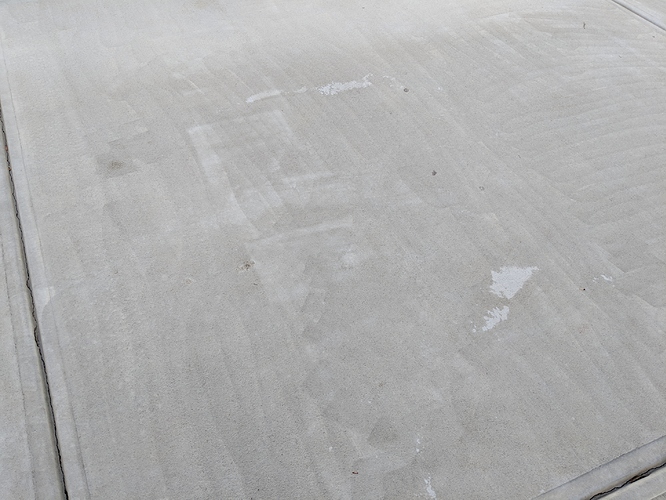 I think it’s about a year and a half old.

No way to fix…not your problem.

Concrete is fresh and not cured all the way.

The only way I wash fresh concrete is with a SH , Soduim Hydroxide mix downstreamed, and then followed with a Citric acid downstreamed. Things come off easily with a light rinse.

After a year and a half it hasn’t cured?

Of course it’s cured after 1.5 years.

If it was poorly mixed, the top layer (cream) can crumble away. Seen it many times on cheap contractor jobs.

Also, it’s been done with a wand/lance, which wouldn’t have helped at all.

The answer is the same though - resurface and refinish.

Not fully hardened/cured…I’m not a concrete guy. But I won’t put pressure on concrete less the 2years

Yeah, looks like a wand on some parts and surface washer on others.

I haven’t really run into newer driveways much. How do you determine what is good to wash and what isn’t?

The cream is the first part to cure so you can drive on it.

Unfortunately, it’s a thin “dress” layer that inevitably comes off with very little pressure. Old concrete will have aggregate showing and will be fine.

Some guys rake it for a textured finish, some guys smooth it over - either way, if it looks new, ( no aggregate showing anywhere) chemically treat it or leave it.

Even with low pressure on the cream, you’ll get heaps of grit coming off as it’s soft.

There’s no way of telling if it’s 2 years old or 10 years old due to the varied traffic on driveways.

You could always ask I guess, but people generally don’t know how old the driveway is unless they’ve had it resurfaced.

Looks like they stripped the cream coat off. Just wait until it starts getting dirty and it’s going to look 10 times worse. Tell them to get a lawyer and sue the other company to replace it. You definitely aren’t fixing it.

I read somewhere, long ago, somehow, one guy had success using an acid wash and a surface cleaner in a circular pattern to take another layer off in an even manner. I never gave it much thought bc it sounded risky. There may even be a video somewhere. No clue how to locate this info. Maybe someone else will chime in.

I feel like a surface cleaner would leave steaks too especially on the edges and where you over lap. It might be better than before but I wouldn’t do it. If I paid for new concrete and a company messed it up they better hope they have insurance or they’re likely going out of business and having to start back over under a different name.

Thanks for the info guys. Hate to leave money on the table, but it sounds like there isn’t much to do here.

Another question though, how do you guys determine when to and when not to wash a driveway. The overwhelming majority of concrete work I’ve done is on a surface that is probably 10+ years old. However, we have a lot of new homes and neighborhoods coming up in my area and I am nervous something like this could happen. This driveway is almost 2 years old, so I, like the guy before me I assume, would have thought it is perfectly fine to wash as concrete doesn’t take 2 years to cure. What is your rule of thumb for this?

There is a method for fixing that in the F-9 cookbook but it’s no cake walk. A last resort really.

I’ve seen some driveways that were almost 2 years old that still had that extremely chalky white cream on top. You literally could take a soft deck brush and soap and take it right off. Someone else had done what you have pictured on one such driveway. The brushed finish was still fine. A heavy degreaser on a test spot actually took the chalkiness off, leaving a more natural color, and the brushed finish still intact. Like @Steve said, it can be fixed, but it ain’t easy. It also will probably turn out a shade or 2 darker. I would just try to talk them into an acid etch and a solid color non-penetrating sealer, so long as it’s not on a bad incline and the concrete doesn’t have much moisture underneath. At least that way, they wouldn’t have to look at it any more.

This may help explain what happened with this concrete and prevent this from happening to others. The concrete has what is called a California edge/ Picture frame or Mirror edge and you see it mostly on residential sidewalks and driveways. If you look closely you will see that the edges and joints are smooth. This finishing process was started by finishers to cut time and allow them to do multiple jobs in a day. To accomplish this, the concrete is broomed slightly wet, then edged and jointed afterwards leaving those areas smooth. The end result looks amazing but it leaves the top surface or cream sandy and very soft causing easy cream removal.

My in-laws had a driveway poured just a few months back with that type of edge. Good info to know! Theirs is also extremely chalky white - more so than typical fresh concrete. It also seems to be much more susceptible to tannin stains.

Does it ever cure hard enough to use a surface cleaner on it?