Just heard about this. What does this mean for those that own pressure washing businesses?

I just saw that. I can’t wait until California breaks off into its own delusional country

Oh wow. All those small businesses going under, all those lives destroyed. Please tell me Herr Newsom will be voted out and those decrees nullified…

Yeah I immediately thought of Sean out there near SF.

It’s unbelievable how they can just ram these policy’s down people’s throats without doing any research of the ripple effect it has on small business owners. If this policy is set in stone this is a huge blow to the exterior cleaning industry in California. I bet no one can find a single case study on small engine emissions being a problem to the point of needing to be eliminated entirely, just bunch it all up into one conspiracy and ban it. Pathetic.

They will complain when wages of workers get lowered because they have to use more workers to cover the loss of engine-powered equipment.

It’s “for the greater good” and ‘inconveniencing’ a few thousand companies is a small price to pay to further the Utopian agenda. Kalifornia is turning full blown Marxist, and that trickles down to other parts of the country.

Looks like pressure washing companies will have to use electric pumps connected to an electrical outlet or those mandated electric trucks that can only get charged once a month because PG&E folded and the State of Kalifornia now runs the electric grid ala Venezuela.

Just to put a face on this law, here is the guy that authored it. 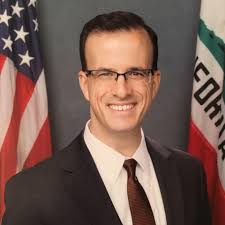 those in charge there need to eat a bullet with their ear. p

I like this forum so much better than the social justice window cleaning forum.

In all seriousness though, the new F150 lightning truck with all the storage in the “frunk” could prove useful for those of us that just operate out of our truck bed.

After reading and thinking about it, the law only bans the sale of new equipment with small engines in California. If you have old equipment you can still use it. So, what’s to stop someone from just driving to a neighboring state to buy new equipment or new parts for the equipment you have?

So, what’s to stop someone from just driving to a neighboring state to buy new equipment or new parts for the equipment you have?

If firearms are any indication they will probably require you to register the serial numbers and ban imports from other states.

In all seriousness though, the new F150 lightning truck with all the storage in the “frunk” could prove useful for those of us that just operate out of our truck bed.

Check out the towing range and capacity of that “truck” and I think you’ll reconsider your position.

After some further delving: CARB compliance has a lot of restrictions to it on the Federal level. So I don’t think California could outright ban motors bought out of state from being used within their borders. Gun control is a whole other ball of wax

It also sounds like this new bill comes with several caveats, like they can’t prevent sales of appliances/motors for which their is no feasible electric/battery powered alternative. The case could probably be made that professional sized pressure washers have no feasible alternative.

I’m not trying to argue in favor of the law (I’m sure there are many factors that were overlooked in writing it, and lawmakers often seem completely detached from the real world). But I don’t think it should be cause for panic, either.

I only get 7,700 lbs out of my current F150 supposedly. It’s a 2018 with the 2.7 ecoboost. The guys I work with like to rag on me about the Honda Civic engine Ford put under my hood. Or when they see me at the gas station they ask if I’m low on blowing bubble mix. Regardless, I don’t own a trailer, and have never towed more than a 600lbs riding mower with it on a 5x8 trailer so this truck has been good to me for what I do with it. I feel that I could justify the all-electric truck in my mind.