Background: When I am done grilling, I scrape the stove down, use water and towels, get it clean, then oil it back up, wait for the smoke to stop, let it cool down, put it away. Sits outdoors with no roof, but has a cover. I seasoned it, grill is black (well brownish on the side walls - even with a torch it didn’t seem to want to blacken). Read the manual, watched videos.

We had a reasonably nice day today, mid forties for a high. Grilled up some cheesesteaks and hashbrowns. Here is the question: everything (except for the onions) was sticking. I always put a little oil on it after it warms up. I get the top hot, then I turn the burners down (outdoors so 44F at the start but about 37F at the end). The meat stuck, but those frozen hashbrowns, man they stuck like glue. I lifted them back off, scraped it down, added even more oil, wiped it a little, turned temp lower, then put them back on. Still were sticking a bit. Is it because they were frozen? The cheese steaks were frozen too, they stuck a little when I added the cheese on top after chopping them up and putting some garlic salt and pepper on them. They did taste good though.

It does help to bring stuff close to room temp before putting it on but it’s not absolutely necessary, in my opinion. These Blackstone’s get incredibly hot so after bringing it up to temp I like to lower it (as you did) and let it sit for a solid five minutes to let the heat disperse a bit.

What type of oil are you using to season it with?

I’m no expert at Blackstone’s, but I’ve cooked on them for a few years. First, the absolute best way to season it is with a pound of fatty bacon. Scrape it off when done but don’t use the scouring block or water. By you a box of the brown trifold paper towels like you find in public bathrooms.
https://www.cleanitsupply.com/p-58492/genuine-joe-multi-fold-natural-paper-towels-4-000-towels-gjo21040.aspx

After you scrape the grease down wipe it clean with the towels while the grill is hot. They don’t leave a paper residue like regular paper towels. After you wipe it down let the grill get hot enough to smoke, then squirt a little vegetable oil on it and wipe it in. It should be smoking when you do this. Then close the lid and turn it off. After a few times doing that you can cook with just a little bit of oil squirted on without stuff sticking. It’s like a cast iron skillet. You don’t ever wash it, just wipe it out and re oil it. 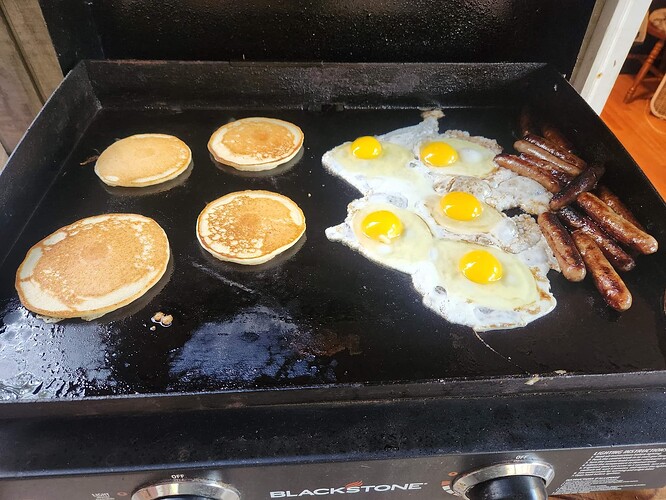 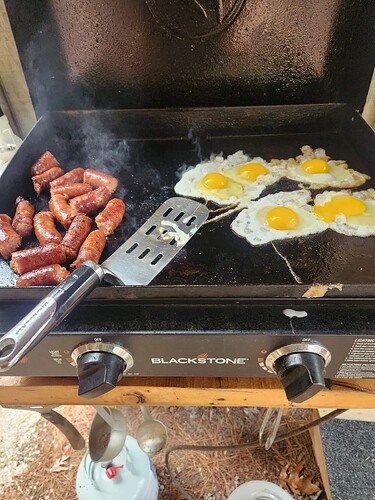 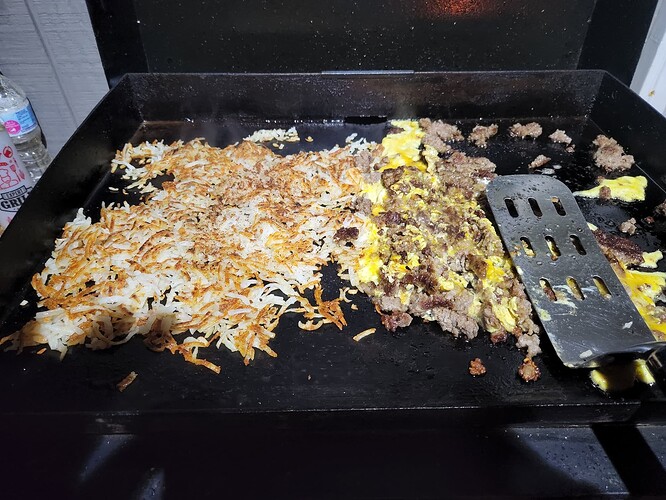 I personally clean mine with a wet rag and some tongs while it’s still up to temperature but I seasoned mine with grapeseed oil because it has a high smoke point and doesn’t contaminate the flavors when cooking different things like stir fry, vegetables, etc.

I grew up in a restaurant with a huge flat top grill. We always cleaned it the same way and you could cook anything on that thing and never have a problem with it sticking. That old grill is probably in a junkyard somewhere in Texas and I’d bet it still has a good season to it lol

doesn’t contaminate the flavors when

I don’t disagree in the slightest. My wife, however, strongly disagrees lol

I’m on a diet and these pictures just made me salivate harder than Pavlov’s pup. 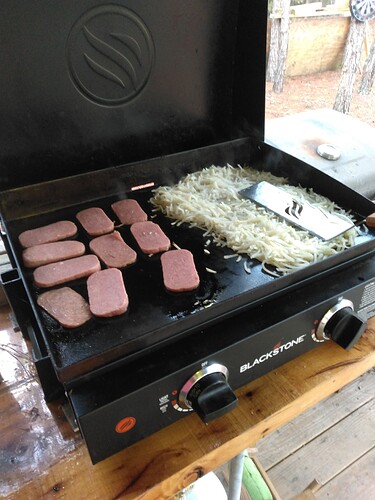 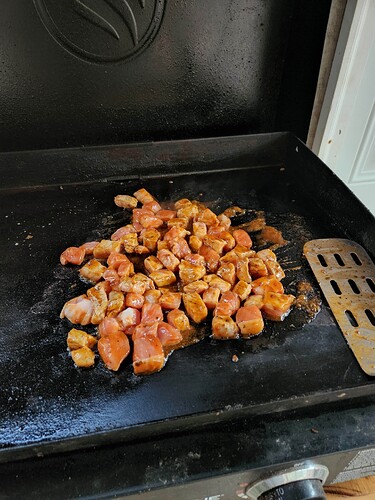 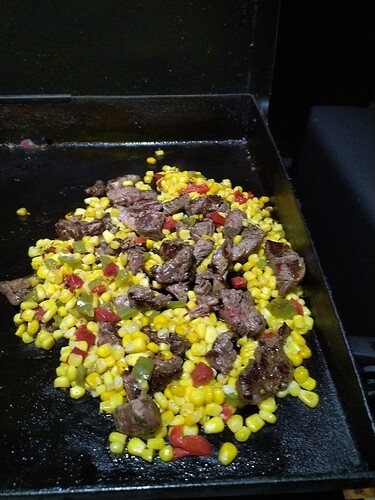 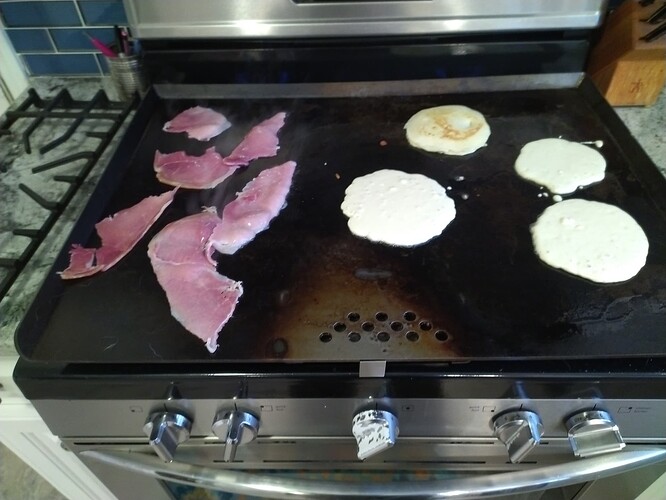 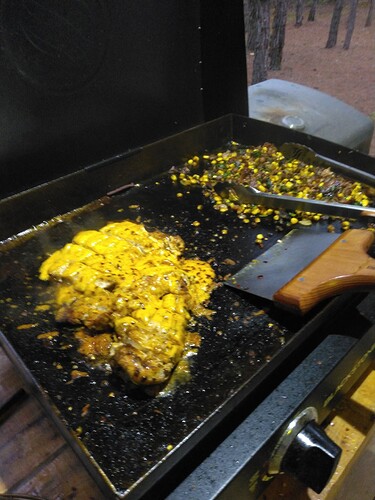 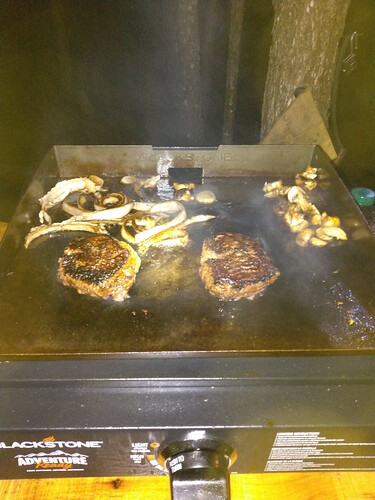 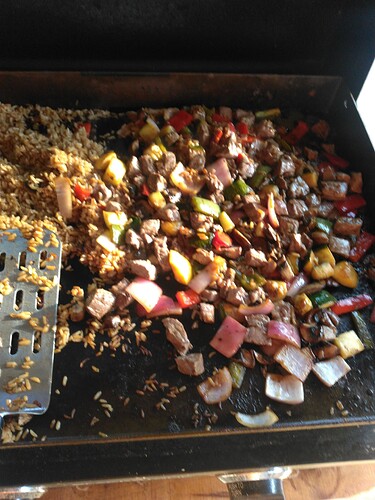 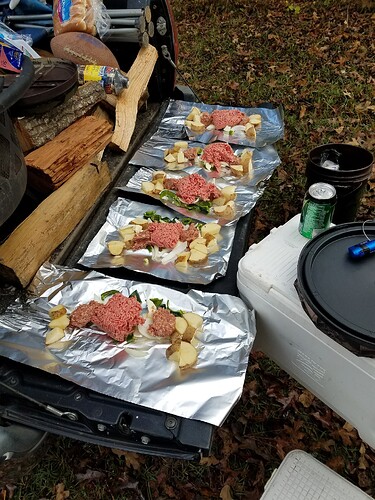 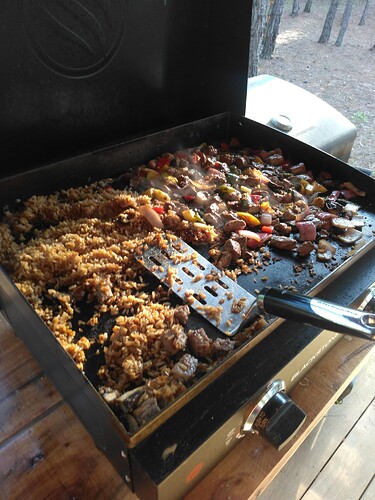 Well, that is good to know. I was letting it cool down after the heat up, but maybe I need to wait longer. I also didn’t even think about the frozen food possibly sticking, but I can thaw stuff next time to alleviate that issue.

I just use vegetable oil or olive oil, whatever I have the most of at the time. I cycle my inventories, so I might choose to use one or the other based on exp dates. I’m one of those people that have backups of everything I like. Sometimes 2-3 backups. It is also a version of prepping without the tinfoil hat stuff. I have at least 4 bottles of chipotle sauce on hand at all times. SOooo good with shells and cheese.

I don’t eat pork, haven’t had a bite of it in about 30 years. I won’t get into the why of it, or how. I’m not the government, so I don’t tell people what they can and cannot do.

Yeah, that is a good recommendation for those towels, paper ones do leave a residue. I was switching to a white cotton towel this last time and to be honest, it seemed to work better. I do squirt the grill with oil when everything is done, turn up heat, let it smoke off, turn off everything and put it away.

I have a scraper I use for cleaning after grilling, maybe it is taking too much off? 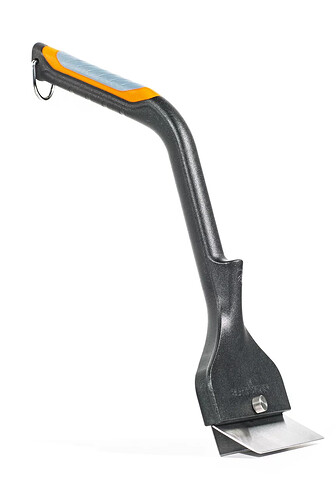 I just remember after doing what the Blackstone book said to do it didn’t seem like enough. I remember that in the military we had to scrape down those large grills and use stones on them at the end of the day. I figured I probably don’t need all of that, as I am not cooking for hundreds, but I bought the scraper. Ahh, the military, teach you to kill people and how to take care of a grill, all in the same week.

I’d switch to a higher temp oil like grapeseed or something along those lines. Olive and vegetable have somewhat low smoke points so if it’s smoking it’s probably burning off. The oil creates a polymer layer that keeps stuff from sticking.

I use a 5 inch putty knife. No need to scrape hard

see, this is what gets me. I’m not arguing with you, but the stupid blackstone book says use cooking oil, spread a thin layer, when griddle top has stopped smoking and there isn’t a noticeable sheen, it’s done. The rinse and repeat at least 3-5 times for seasoning. I thought the smoking was the indicator it was working, no smoke, done.

Smoking is the indicator. When it’s smoking the oil is filling in the little moleculer holes(I really don’t know if that’s true but it’s something like that). I’ve never heard of grapeseed oil but it might be the next best thing to cheerwine. I know that bacon and vegetable oil work great on the Blackstone. Maybe different flat tops are different. The flat top that goes on our stove top likes olive oil. And that may only be because that’s what my wife keeps on the counter.

After you scrape the grease down wipe it clean with the towels while the grill is hot. They don’t leave a paper residue like regular paper towels.

And here the whole time I thought you cooked you shoe leather dryfart chicken surprise this way instead of using paper towels to clean it @Innocentbystander.
Jokes on me I gather.

I think you’re not using enough oil. Have to use a fair amount on most things. I just treat it like one o my big cast iron pans. I get it hot, then set my dial and throw the food on there. Food will cool it some. When cleaning mine, I cut off, then just scrape right away, wipe any residue with paper towel, then pour some oil on there and spread thin coat. Then eat. Takes all of 2 min tops. Occasionally, I’ll squirt some water on a place or 2 if I need to re-scrape an area, but most of it sizzles off before I even get to back of grill. But I’m pretty generous when I re oil at the end. Leave a decent coat on it.
I use a blend of olive and vegetable oil that I get from a restaurant supply place.

@DisplacedTexan - Grapeseed oil has a moderately high smoking point ( 1 ). For this reason, it’s advertised as a good choice for high-heat cooking like frying . However, this may be bad advice, as grapeseed oil is also high in polyunsaturated fatty acids. Because of that Olive considered more stable at high heat.

All’s I know is it works like a charm. It’s probably not the healthiest but you use so little to coat that I don’t think you’re actually ingesting much.

@Dirtyboy Blackstone also says to use their crisco looking seasoning and I tried that stuff on a small cast iron skillet and it was awful. Put three coats on it and still had eggs sticking like crazy. After that I knew I wasn’t putting it on the flat top. Could be user error, maybe too much heat in the little skillet, I don’t know. I just know I didn’t like it near as much and I’ve since stripped and re-seasoned six or seven different pieces with grapeseed and it is slick as snot.

Thanks everyone for the info, much appreciated.

I will have to wait for another warmish day and dry weather to take a closer examination of what I am doing. After watching some more videos, reading these recommendations, and examining my grill, I think I am letting the oil cook/smoke off too much and I am not letting the surface cool down long enough. Some day I’ll be the greatest flat top chef at my house

@DisplacedTexan I saw some videos showing that, so it scared me off of it. I’m going to stick with vege or olive oil mainly due to the fact that I have multiple bottles of it. I bought a bunch of it before the price hikes. Just wish there was a way that I could have stored eggs, I knew the price increase was coming. It is $5 a doz for large store brand, and people are saying they are paying $8 a doz in other parts of the country. Just wish I had some vidalias, the yellows and whites suck this time of year.

You need a chicken coop with a couple of chickens.