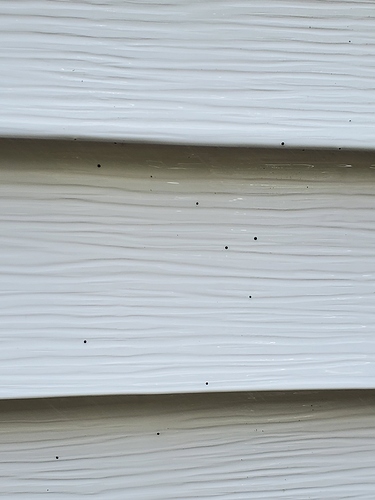 These spots were left on siding after washing. I seem to think they type of mold spore. Someone pointed them out on a white car I had before. Anyone know exactly what they are and how to get rid of them. I pointed it out to customer that I’d some research and get back to them, they didn’t seem to care as they are super small. But it was bugging me. Thanks

thanks ill look that up

I agree with Woody. There’s nothing you can really do for them. You can pick them off with your fingernail but it still leaves a black stain that nothing will remove. That’s what happens when you go too long without washing your house. If the artillery fungus is relatively new it’ll sometimes wash off with low pressure. Just pick a few off in front of the customer and show them how there’s a stain left underneath. Artillery is fungus isn’t your problem. I just had a house Thursday that was covered in them. Most customers will understand if you explain everything to them.

thanks, just found a great post on here about it, now that I know what it is. Says magic eraser is great. I wantes to have info for the customer in my follow up with them. Truly, lots of info here.

If you use a magic eraser you’re going to disturb oxidation. Artillery fungus shouldn’t be part of a normal house wash nor should oxidation removal. Those are big money jobs. Tell them you might have found a way to remove it and would be more than happy to send them another estimate for both fungus and oxidation removal.

I spent two hours last summer trying everything suggested on the internet to get it off my mom’s white siding.
Some university produced a study with a bunch of options to try. I went through the list.
You name it, I tried it.
Nothing worked.

I told a customer the other day if someone could figure out a way to remove it they’d be a millionaire. Sure, you can scrape the raised speck off but it looks the same underneath. Just smooth…lol

That’s what I was hoping to discover—the secret to removing it. And, yes, you’d be a millionaire.

Toothpaste. Mouth wash. Literally, I tried it all.

Even made a video showing me try all the different things.