I have a customer who had the brick on his house acid washed. He said he could see that the brick company was continually rinsing down the brick and the driveway–taking care to avoid any problems. But after they left (a few months ago) he noticed the top sections of his driveway (closest to the house) were discolored.

Is it fixable (apart from jacking up the concrete)?

He said even if it could be lightened up some, he’d be very happy.

Notice in the one pic, the workers put their brushes down on a lower section of the driveway and it left marks. 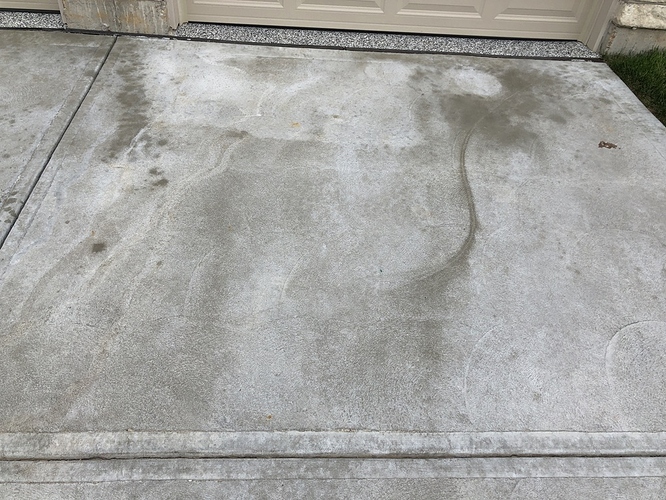 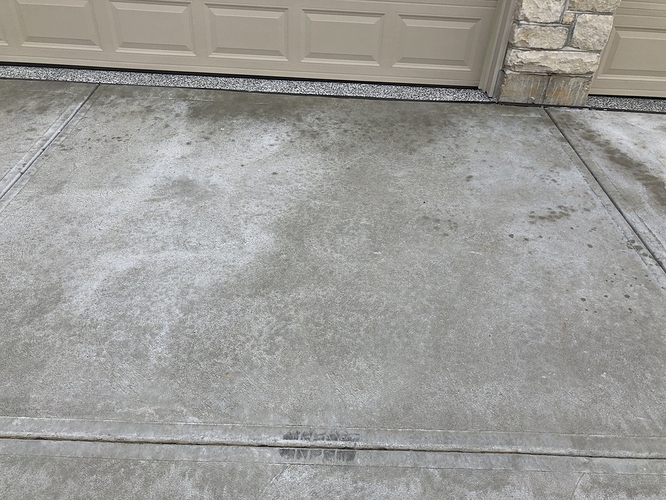 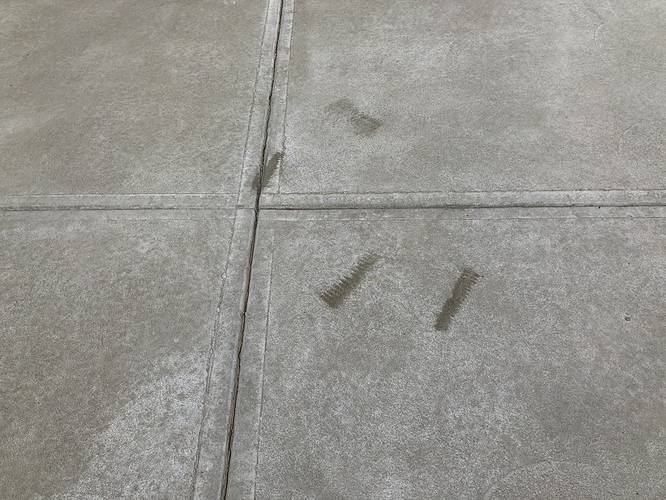 Did you feel the concrete? Is it really smooth where the discoloration took place? Acid can etch concrete making it more porous. I would think that you could “potentially” even out the discoloration, but you would also be damaging the concrete in the process. Homeowner should have went after the contractor to fix it. I think if you inform the homeowner about the acid etching damaging the concrete and he is ok, wouldn’t hurt to try some mild acid and move up the scale to even it out. If they used muriatic or phosphoric, they are more powerful than oxalic or citric, you might have to use the same to even it out.

10 mil plastic is expensive, but cheaper than concrete. Funny that you posted this, getting ready to strip a porch with concrete all around it and planned on putting down plastic to keep from discoloring the concrete. This is going to be a multiple application of stripper, that porch looks like people just kept painting it over and over and over.

I did not feel it.

I forgot to say that the concrete is 18 months old so pressure is out of the question but even if it wasn’t, I don’t see it helping.

I agree, pressure shouldn’t do anything for it but damage it. The “acid etching” removes part of the top of the concrete, and I won’t get more specific than that. If your interested you can read all about it, but here is one quick link https://www.engr.psu.edu/ce/courses/ce584/concrete/library/chemical/acidmech.html. All that you can do to it is to technically damage the concrete further so that it has a more uniform appearance.

I’m not a concrete expert, so you should seek the advice of a mason. Hopefully some of the people with masonry backgrounds pop in here to give you some better advice.

After looking at those pics again and again, did they put some type of sealing coat on his brick? The way some of those pictures make the concrete look as though they may have used a siloxane or silane. Did you ask about that. is the concrete wet here or dry? Sorry for the 20 questions, just trying to help out a bit.

They did not. They recommended that he have it sealed but they didn’t offer that service.

He is positive there were no stains before the brick was acid washed. The rest of the driveway looks fine.

Concrete is dry in all places.

I definitely wouldn’t seal it until after you acid etch it. I’d probably go with a colored sealer so it doesn’t look so white.

You’ll be able to even it out with acid. Some acids lighten more than others so just have a few on hand so you can match the lighter color. Either way it should still look way better than it does now. I’d probably go straight to Muriatic and just test the dwell times before deciding on how long to let it sit before rinsing. Actually, I’d also try some of that Purple Power Aluminum Brightener and see which lightens to a similar white.

Aluminum brightener will get it looking close, if the brightener has HF in it it will definitely get it whiter with less product.

To avoid this in the future have the concrete underneath saturated with degreaser.

@marinegrunt & @SurfaceTherapy, if I use the Purple Power Aluminum Brightener, what ratio would you recommend? And how long of a dwell time?

The Purple Power doesn’t have HF in it. You might be able to find some aluminum brighter with HF down in St. Louis. I’ve had no luck at all up here.

I think the PP has Hydrochloric and Phosphoric in it. I’m not sure what ratio I would use. It’s stronger than Muriatic but isn’t as aggressive. If that makes sense. I would just get a couple spray bottles and test some different ratios. You might be able to go 1:1 but straight is probably fine too. The stronger it is the faster the dwell time.

So I just let it get to the desired “color” and then I rinse it off? Will the runoff discolor the rest of the driveway or create lines from the runoff?

Yeah, pretty much. It’ll only get so white. You just want something that is going to get it at least as white as their acid did. Just rinse really well and it should dilute it enough it won’t cause any issues.

@marinegrunt suggested the same ratios I was going to. PP AB isn’t the strongest chem by any means.

I was in a pinch awhile back and needed some HF. Ended up getting some from a guy that owns a bunch of car washes. It is called DTC Wall Cleaner. I believe it is made in Kansas City.

The customer thinks the acid washed turned it darker not lighter. But does that even make sense?
The last pic where they put down their equipment definitely looks darker in those few spots.

It looks super white in the first picture near the garage door though or is it the darker spots that the “acid” supposedly caused?. I don’t think it’s possible for an acid to darken it like that but I wonder what else they had in the mixture? Maybe it was their acid reacting with the sealer on the driveway? I’d maybe use a spray bottle and test on the darker stuff. Acid definitely lightens so should help. 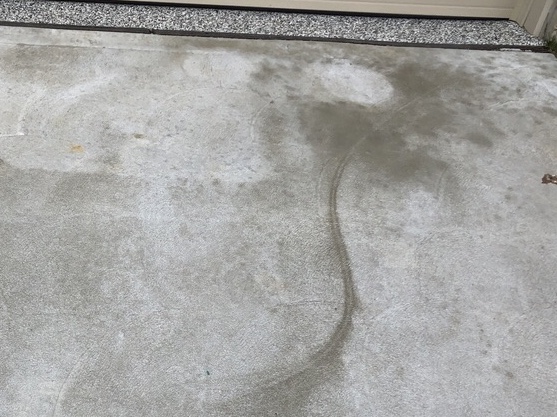 You can see where a hose was laying outlined by darker color and the two perfect white circles up top look like gallon bottle or paint cans were sitting there. I think @Dirtyboy is right on, a sealer was applied to the brick and they dripped it on the concrete next to the house. They either spilled some or had a bunch of runoff and it ran down that section of hose and obviously the brush marks indicate the same thing.

Not sure if the acid would remove a silane sealer.

Customer was saying it was the darker spots caused by the acid as evidenced by the tools set down.
But you’re right, it doesn’t make sense for acid to do that.
I’ll try a spray bottle on some of those spots to see if they’ll lighten.
Thanks for the help!

I think its sealer

I agree with @PristineGC. I would get in touch with the owner of whoever did the acid washing of the brick and talk with them. Get the name of the sealer used. I re-read the thread and saw where you said the guy said to just apply sealer to the drive and it’ll fix it. Makes sense he did seal the brick and it wasn’t acid that caused the issue.

Skip the acid and just soft wash and then seal the driveway.

Muriatic acid is the common name for hydrochloric acid