@Paul_Kelly I’ll be back to date night soon enough. Lol except she takes half as long to find an hour and a half movie for us to watch on Netflix. I’m not allowed to pick or we’d watch Braveheart weekly.

What size machine are you running the xjet on?

If you do decide to use the x jet I would suggest rinsing with a garden hose. In my area the most taps average around 5 gpm.

Yeah those plastic valves that are sent with it aren’t designed for commercial use…which is funny because I don’t know how many casual home owners are using x-jets haha.

Also, those are ball valves, which in any setting are used mainly just for turning flow on/off. The problem with regulating flow with one is that between the off position and 100% open position is 1/4 of a turn. A gate valve on the other hand uses a knob (not unlike what you see on a garden hose spigot) and requires (typically) 4 full rotations to be 100% open. So you have more control over flow rate.

I can’t remember if the x-jet hose is 1/4 or 3/8 but all you’d need is the following items and have a nice setup:

If you’re reeeeeal fancy you could connect a ball valve AND a gate valve with a barb on either end with a npt nipple and have an on/off switch and a flow control valve.

US plastics had a bad shipment of valves earlier this year. They set me 24 free 3 way ball valves when i called them. That valve on the xjet isn’t a gate or metering valve. It’s made to stop the bleach feom siphoning out when you disconnect the hose and drop it on the ground to rinse. They are only 3 or 4 bucks

That would make things so much easier than carrying a bucket with you. Let us know how it goes because I have to get an x jet now…

I will. I use 6 & 7 gallon black buckets for storage of SH and a dedicated chem tank on the trailer for downstreaming. Modified one of the lids of the black buckets to draw from after seeing one of innocents videos.

I used to use a big spring clamp to hold the hose in the bucket and it wasn’t very effective. Modifying one of your buckets will make your x-jetting life a lot easier. Edit: just taper the bottom of your draw tube. I tried to get too close to the bottom on the first iteration and the tube literally sucked to the bottom of the bucket.

I’ll just have to weigh the pain of lugging buckets with the pain of wrangling two hoses. Won’t know until I try. Ha! 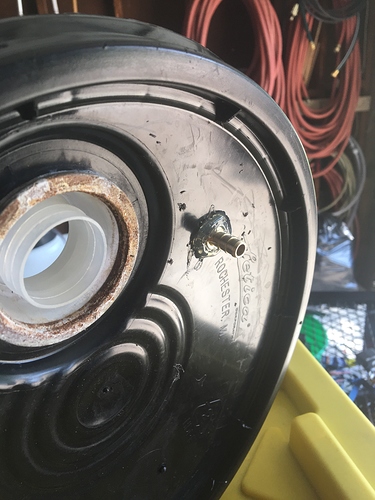 I have did a few roofs with x jet. I get good results when I pull straight pool shock from a 5gal bucket. You have to account for the gpm that your pump is pumping

Wow. Thanks Guys! I think I might try the X-Jet. Did a house the other day and had a brand new downstream injector fail on me. Although the more I think about it the more I wonder if my draw tube got clogged somehow.

Did you ever decide this worked or go back to the 12V?