Where is everyone getting hose from currently?

Just wondering who yal using lately? We had been using water cannon for the last year or so but just went in to put in an order and they had literally doubled their prices. They want $200+ for 100ft sections. I know inflation is affecting everyone, but holy moly.

I get it from Russ at Southside

i second this. my distributor also doubled the price of the hose i bought a couple years ago so i found similar hose on southside equipment for a more reasonable price, been going good for 60ish jobs so far

thanks a lot guys, gonna go with russ

Using Fierce Jet from Manatee. Good stuff. Been using it since last year. It’s made by the Hose Company. One wire. Good hose cost good money. This stuff is about $200 after shipping for a 100 ft section. I’ve seen it go on sale on Zoro. Sign up and they periodically send you a 20% off coupon. Order a bunch them with their free shipping.

I see they have hose from a new manufacturer coming in later this month, 90’ non-marking for $170, but made in China. Might buy a length just to see what its like.

Or anyone tried this HFZPW426100Q
100 ft. from Flexzilla yet? I know there was a thread some time ago but at that time I don’t think there had been any takers. 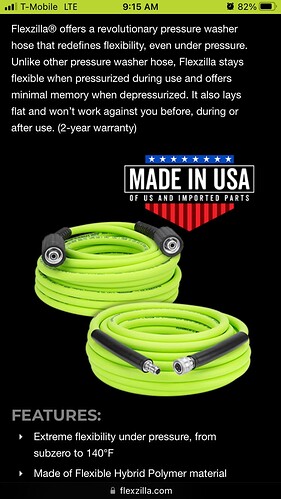 I’ve used this from BCE It’s cheaper, but in my experience it marked everything up the first year. I had to scrub vinyl decks to get the blue off. Racer says his doesn’t mark, so maybe I got a bad one. It also comes in grey. There will be shipping charges and tax, so who knows what the final cost will be. It is heavy, but I’ve gotten 3 seasons out of one, but I’m just a part timer, not a full time wizard of washing.

I’ll admit, every time I need something I go to PressureTek & see if they have it. If they do, it gets delivered 2 days later like clockwork. But I look forward to shopping with Russ when the time comes.

PressureTek & see if they have it. If they do, it gets delivered 2 days later like clockwork.

Typically I order it, and Russ ships it out either that day or the next…probably gets to me in about 2 days. I’ll admit that I don’t really ay attention, because I order more hoses when every truck deosn’t have 2 on the reel and a spare onboard…so it’s never an “I need it ASAP” thing for me with hoses.

It was on a used trailer we bought last year. I tried it. You would think it would be soft and flexible. It was not. As soon as you got any pressure in it, it was stiff as a wood branch. It quickly burst after using a few times. I had to know. Just glad I didn’t pay anything for it.

The one wire fierce jet is rated at 4350

love pressuretek, but their pressure hose stock has been nonexistent lately

I had to go check it out. Looks like every pressure hose they offer is ready to ship.