Hello all, so I found these machines both a good price but outside of one being a Pressure Pro and the other being a store brand I don’t see the difference except the price. I guess what I’m asking is if the Pressure Pro name is worth nearly 3 hundred bucks or 5 hundred if I put it on a skid. So we’re clear I’m new to the industry actually not even officially in it yet so if anyone spots a real difference please let me know so I can make the right choice.

Look at the included accessories. The Pressure Pro comes with Gun/Wand, hose, DS injector. That alone is not $300 worth though. Otherwise, they do appear to have the same engine, pump and specs. Without any more info, I would just go with the cheaper one and buy the accessories separate. That way I could get the hose I wanted, the gun I wanted, etc.

Oh yeah thanks for that, never noticed I guess I need to pay better attention to detail especially in this line of work. I’m sure it would come with some generic accessories that I would have to replace anyways.Thanks again.

Dont know about hose. I got a Pressure Pro 8 GPM Hot Water and it came with a 50 ft gray non-marking hose.

I got sent another hose due to a fuel tank issue I discovered that saved them $$$$$.

I bet they just have one hose they use for every machine, but still, with $300 cash, you can get more than just a gun,hose and injector.

If you are starting out, buy use that money for back-up Quick Connects, o-rings, chems, longer hose (50 ft won’t do a lot and you will not want to be moving your unit all over the place).

Do you know what pumps are on those?

It is, i have one. when u use the gx390 you loose the pressure but maintain the gpm with gear ratios and rpm. Dont know the exact specs for the ratios and rpm’s. But most pumps can run at different psi and gpm depending on gearing.
Its the same reason you can take a 8gpm pump mount it on a gx390 and get 8@1750psi. 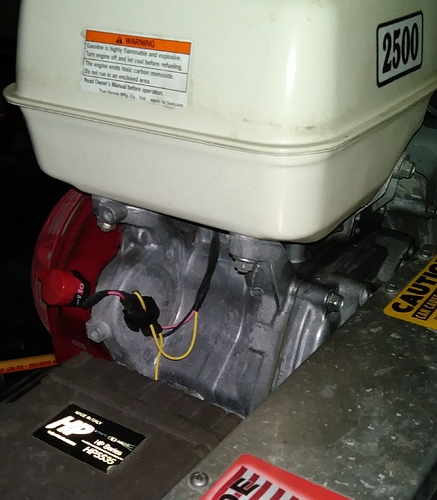 Awesome. Might have to try one of those! Thanks

What was the fuel tank issue?

The gas tank for the engine - the inside film lining was for crap. It came off in little pieces almost like flakes and would get sucked into the inline fuel filter, clogging it up. Initially I thought it was some bad gas, but after running through a handful of filters and 2 more tanks of gas I was still having an issue. Pressure Pro kept saying it was bad gas or tank not venting or downtube inside tank was too long and sucking up against bottom, etc whatever excuse they could come up with, but 1 guy made a comment that they had a bad batch of tanks a while back. I mounted my unit up front with a 1 ft high rail across the front and my 275 gal water tank right behind it. I had to take my trailer completely apart to slide the skid back far enough to be able to then slide the tank out from under the skid, filter 8 gal of gas in the tank through a DYI coffee filter contraption I built. All said and done, I got close to 3 cups of this flaky plastic crap out of the tank. Guy at Pressure Pro goes and checks and sure enough they have a bunch more tanks with the same crap in them sitting on the shelf ready to go on new units. They offered a new tank, but by that point, I had already put my trailer back together and no way was I going to take it all apart again just to swap the tank since I had already cleaned it out, so they sent me a 50 ft hot water hose.
Lesson of the story, always keep back up filters on your rig just in case you do get some bad gas. Having to pack up on a job, drive 2 miles to the auto store to get a filter and then back to the job is a profit killer. I had one job that I was not able to finish before they opened which was 1 hour 30 minutes from me, so I had to pack it up, grap new filter, head home and go back the following day.
@Harold You got your unit just a few days before me. Have you had any issues with your fuel?

@Donte55 how do you like the machine,Would you recommend it?

Yes. Same issue. They offered for me to have a everything flushed by a local shop. The local shop and I were on bad terms bc they had an attitude about me not purchasing my machine from them. Prior to this we have a good working relationship. They wanted to sell me a 12k hotsy 5.5gpm and told me I didn’t need 8gpm. So I purchased elsewhere for 5k less. Needless to say they refused to let me use my machine while I waited in the repair line. So I just change filters regularly. I intended on letting them flush it in some down time but I haven’t had any yet.

This is why I asked you. I was curious is pressure pro addressed the issue or just kept sending them out. No way to know since our purchase was so close to each other.

I have no way to know. I would think after my conversations with them, along with several hours over a couple of days on the phone with one of their head guys sending pictures to them left and right that they would have at least flushed them out before they used any more…Who knows…

If your just starting out, i think the 5.5 is a better machine than the 4gpm. But with a 5.5 you will need to start with a buffer tank which means a more permanent set up. The 5.5 can run a larger surface cleaner and will clean buildings faster. The only downside of the 5.5 is that if you need to run long lengths of hose (over 200ft) to surface clean the pressure drop is pretty bad.

If you cant set up a more permanent rig and will need to unload the machine at every job and hook up directly a customers water than the 4gpm machine would be better.

Thanks for the reply @Donte55 I am just starting out and I have pretty much settled on the 5.5 I’m gonna be building a trailer set up so it won’t need to be moved. I was really worried that it wouldn’t power a surface cleaner sufficiently I’ve learned that I’ll lose about 260 psi with 200’ of hose just wanted a little confirmation that it would still clean residential concrete.

It will power a surface cleaner fine. You really dont need that much pressure to wash concrete anyways. I run my machines at 1800psi for flat work and run 200 feet all the time. If i need more than that im moving the truck. Good luck to ya