We’re thinking of building a new trailer for my son. We live in North Central Florida and do about a 30 mile radius from our home.

Does anyone have personal experience with both open and closed setups that they could pls share any pros and cons?

I ran across this thread the other day.

My conclusion? The biggest benefit of having an enclosed is it also serves as a place to drop a deuce!

Other than that it really just depends on personal needs and wants.

Open is much easier to work from. Box can be a rolling billboard. Having covered storage is a point in favor of open. If you had to choose right now, which way would you go?

I use a enclosed trailer. I wanted to keep my equipment out of the rain. Mainly because I live at the shore and everything rusts. The more I can keep it dry and out of the salt air the longer it will last.

The more I can keep it dry and out of the salt air the longer it will last.

Of course, that’s assuming that you’ve vented your chem tank externally and not created an alkalinized salt air environment inside the trailer…

How tender would you like that dead horse beaten?

I don’t have a chem tank in my trailer but I do keep several 5 gallon pails of SH in there. So far my equipment hasn’t rusted out yet. My trailer floor takes a beating though. Any spilled SH makes it way out the back of my trailer and has slowly rotted the exterior metal on the rear lower portion of my trailer. Try pissing in a bucket on a job in an open trailer. Enclosed is good for somethings…

I know trailers are the most common and simplest way to get started, but I’d never run an open trailer again though. I’d pick enclosed if I had to do it over and I’d never spend money on a single axle trailer again.

Today, my dad did the brakes on the tundra. Tomorrow on the F-250. Being able to switch between the vehicles has been awesome.

I’ve been too busy to do anything on the truck build except a muffler and new tires. But being able to just fire up and go without messing with a trailer in the morning sounds like a dream. Not to mention easier access.

Much easier to work out of open but you lose alot of storage space and ability to winterize by simply putting a heater inside. Machines run better on open trailer but they are exposed to elements. Either way, after running both kinds for a decade, i won’t work out of either type anymore

If i had a ability to store an open trailer out of the elements it would be a no brainer… i dont so i have a small 5x8 trailer but i dont work out of it, machine comes out.

I’m switching from open trailer to a van, which will allow me to have other tools safe from sticky fingers and the sun, and look clean and tidy from the outside

Plus i can give they keys to my foreman and have him go to jobs and im Not car-less at home, or the wife isn’t while I’m at work, win win win

The only thing I would worry about with a truck or van setup is a break down. With a trailer you can hook up another vehicle to it and not miss work due to broken vehicles.

I would love a truck with a utility bed but it is a huge investment compared to a trailer unless you find that unicorn that’s cheap, reliable and needs minium work to keep it on the road. I’ll get my unicorn some day.

I’ve never spent more than 10 grand on a truck. Don’t buy new. Get a f250 and find sautilitybed on Craigslist for a grand

Agree if you can get it all on a truck then go that way. I pulled a trailer for the first 2 years. Halfway through last season I piled it all into my truck. It looked like crap but I didn’t have to pull a trailer. Now I’m building a new skid thats really slick and nice. If I need to pull a trailer it will only be to pull a monster tank for a big job.

I would definitely go with an enclosed setup, in in eastern NC where everything rusts as well. I have an open trailer it seems like every week I notice something rusting on my trailer. And enclosed trailer also gives you better security and the entire outside is a moving billboard. Just my 2 cents I’ve got an open trailer an as soon as the season ends I’m taking my equipment off selling the trailer and getting an enclosed.

I wouldn’t have an enclosed trailer because I like the easy access of an open trailer and I have a shop that I can back the whole truck and trailer in to and at night and leave it. The thing about these questions is that there is no one answer. Box truck, cargo van, flatbed truck, open trailer, enclosed trailer, 1 axle, 2 axle, 8 ft, 10ft, 12ft… etc… It all depends on what fit your needs best.

I agree, I store mine inside half the time but only when I don’t have jobs the next day. I have left it outside for weeks before cleaning the garage out to store it. It’s all in what works best for you and there will always be several different sides to every question that why I like this open forum it give more than one side to common problems.

I’m dying for a flatbed like @squidskc got, but I hate the thought of mounting all my PW equipment to it and then only being able to use it for one thing.

When you move everything to the truck, now you’ve got an empty trailer. At least thats how I’m coping. I haven’t even had time to do anything with the flatbed… 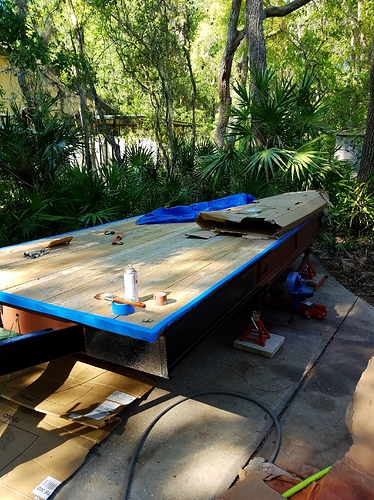