Before I go looking on a Toyota forum, maybe someone here knows. Want to get rid of the stupid Xreas on my 4runner. Anyone know if I can just rip it out and put bilstein 5100’s on, or is it somehow connected to the computer or something for downhill assist and traction control?

Rip it out. You won’t have any problems, that trash from Toyota is It’s own standalone closed loop system independent of everything else . Snapped suspension bolts and Toyotas go hand in hand be generous with the slippery stuff.

No it’s purely mechanical. It’s my understanding you need to cap off the system as it contains a fair amount if fluid. I have a 2006 with it, doesn’t lean at all in corners but stiff as all get out.

BTW it’s also a good idea to get FJ rear springs to help the 5100’s from what I’ve read.

Thank you kindly for the info.

We had a tire shop do ours. Just upgraded to new shocks and lift. It just gets unplugged from what I understand. No codes or anything else to worry about. Still drives like new. 2017 limited 4Runner

So, put it on the lift, showed my youngest Wyatt to do to rip everything out. I cut the lines on the back shocks with a pair of files so he wouldn’t have to worry about the lines being under pressure and told him to have at it. I went in the office to watch Maverick. Xreas is all gone, as are the front brake lines. He was doing what dad showed him lol. Good grief what a mess. Guess I’ll have new brake fluid. His truck door was sagging because Chevy decided weld on door hinges were a thing in the 90’s. Bushing hole was wallowed out so filled out with weld and redrilled. No brake lines were cut in this endeavor 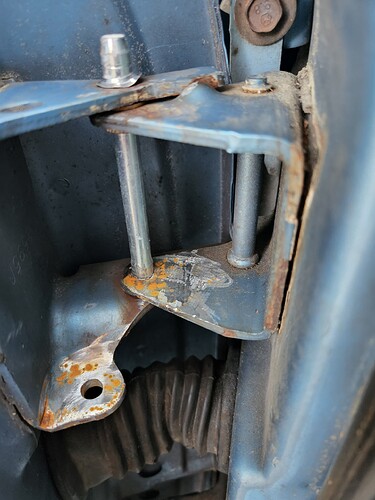 The series or the movie?

Series. If it’s an old western, I got the DVD box set.

Love me some wells fargo.

But highway patrol takes the cake

Hahaaa! I can relate. My dad has been a contractor since forever. One of my earliest memories was when he brought me along to help him “paint the windows”. I got right on it & had 5 or 6 panes of glass painted as high as I could reach before he could turn around.