Ok guys, I did a search and came across several threads but just wanted to throw this out there and see what responses I could get. I met with an HOA today about doing several projects for them. One is two tennis courts. They have been cleaned previously and have surface cleaner marks all over them. To which I told the HOA board member I was meeting with was what you had to be careful with on tennis courts. While explaining everything to her, I was honest and told her that I hadn’t done a tennis court before, but that I would more than likely do a soft wash on it as to not do any more damage as the previous cleaner. The threads I read had several saying surface cleaners and several just a soft wash. SO what’s everyone’s opinion. I’ve kind of already shot the surface cleaner down with her after seeing the previous damage. Just a roof mix and soft rinse?? Here are a few pics. 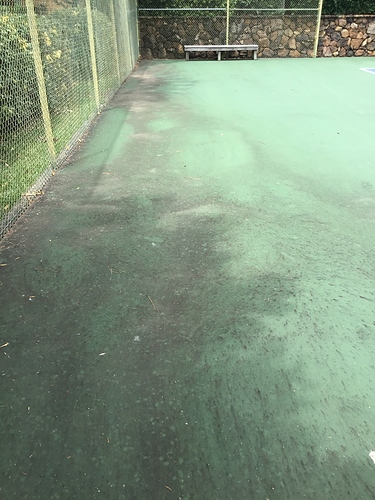 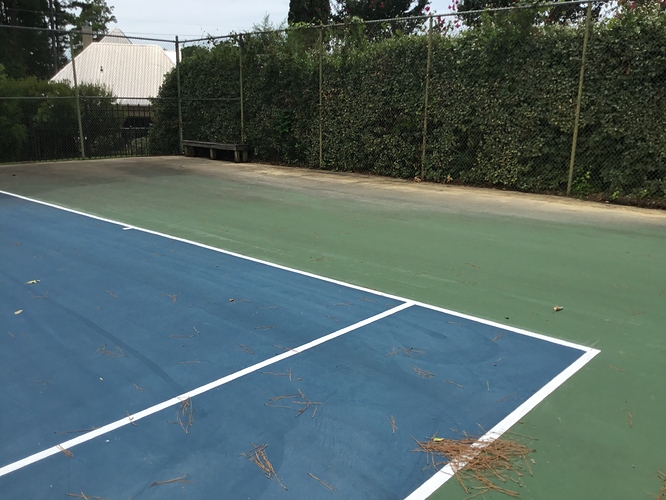 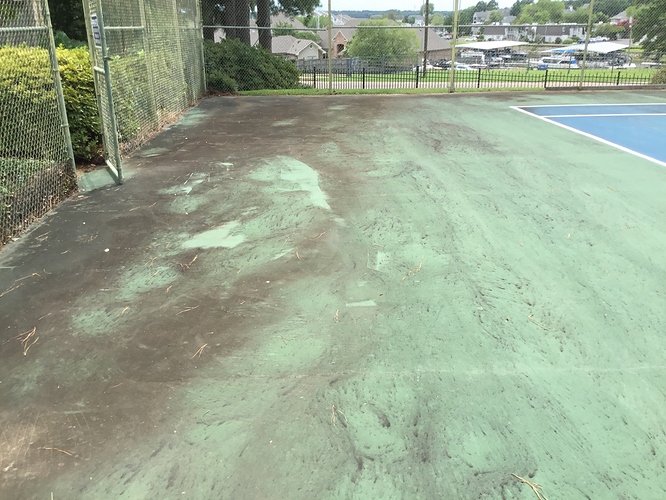 I xjet straight 12.5 after blowing off with blowers. then wand rinse in quadrants

I’ve used a surface Cleaner on them but after putting down a 3 percent mix and only about 1500 psi. but those don’t look as bad as the ones I did so soft washing and low pressure should do it. make sure you flood the out lying landscape with water though. You can also get mister pure clean to show you since he’s our local softwash expert

Now this is FUNNY!

As a former tennis player, if I may…

Get a decent sized floor squeegee as tennis courts tend not to be perfectly flat and will have low spots where water will collect.

I’ve done a few. The oxidised coating is a pain, and that’s the cause of the lines. It’s good coating under old, sun-oxidation.

You can go over it two or three times and still the lines can be present. Until you get all of the oxidation off, it will have lines.

If you just softwash it with a strong chemical, the black will go, but the lines will stay.

So long as you manage their expectations - which you have - you’ll be fine.

I found that a slow or two-pass low pressure SC does the best job. The lines left are minimal and will fade.

(Unless it’s the grassy type with sand underneath. Then softwash only)

Thanks. Yea, I think I pretty much talked myself out of using a SC with my talk with the client. I was quick to point out the lines left by the previous cleaner. Pretty sure he’d ask me what the heck I was doing if I broke it out now! Haha

Just explain that you are using the correct pressure. I think I still have the tips I used if you need them

I then used a 12v sprayer on a cart that I diluted my mix down to around 3% and broadcast over 4 tennis courts. Passed over this application with a push broom style brush. It got rid of the general black haze, but not the concentrated “hot spots.”

I treated one of the spots with 12.5 mopped on from a bucket and it made it bright green. (Cleanest spot on court)

Can’t afford to broadcast straight 12.5 over 4 full courts. Do you have any advice?

These courts are older, probably never been cleaned/resurfaced.

Any wisdom you can provide would be much appreciated.

Talk to the customer and show them how much better it can look. You’re not talking about an extreme increase in cost. Maybe 20-30 gallons of SH? I guess it depends on what you pay for SH.

Bingo. I’d rather spend $75 in bleach than be there all day fixing surface cleaner marks. Xjet straight 12.5 or use your dedicated pump, rinse.

This was what I ended up going with. Sometimes it’s just as important to manage expectations given the existing condition of the surface you are working on. If a surface is worn out and moldy/mildewy and you clean it (with chemical/rinse) the surface will still be worn out after it is cleaned. Such was the case for me. I brightened it significantly and removed the mold and mildew, however the worn spots on the surface did not look brand new.
I always want the result to be amazing, but sometimes a major improvement is still a good result given the condition of the surface you are working with.