Okay. So I made a mistake. Been running my 20” GP SC with the provided tips 25020 on a 5.5gpm 2500psi HP pump. It has been a pleasure running it as such for the past 2 years. Recently after our first freeze for the season I ran the setup for a limestone patio. Yeah the pressure is too high but it has worked out last limestone deck so…onward. At first start up the TBar turned SO SLOWLY i thought it was done for. We let it warm up to temp and voila it started doin it’s reps. Though during its use it would slow down on this “flat” surface despite water/sludge accumulation underneath. Like I would flip it to rid debris and the bar turns so slowly like 1/4 normal speed. Motor is sound. Pump as well as I took freeze prevention steps. I’ve ordered 25035 nozzles which should put me in ball park. So any thoughts ?? Anomaly??

If you’ve been using it regularly for two years and the bar is inconsistent, I’d buy another swivel and change it out at your earliest. Get ahead of it before it stops you from making money.

I’m looking into that. Though should there be ABSOLUTELY ANY play in the bar and swivel?

Not if it’s working correctly. At least on a WW.

I had issues with my GP 20 inch…it started turning much so lower and eventually just stopped. My father in law who’s pretty handy took it home and removed the assembly and ordered two new ball bearings and put them in himself. Now it works like a champ. That’s my back up to a WW Eagle Wash which is a much better unit. You can either spend the money on a new better unit or replace the cartridge and bar…but at some point the Hammerhead isn’t worth fixing.

I’d buy another swivel and change it out at your earliest.

Don’t make the mistake of just buying the swivel, it’ll break your heart. Buy a new swivel assembly, and make sure it’s one of the new ones with a grease fitting so that you can keep it lubricated (assuming that you have a Hammerhead)…

I was about to comment, that my SC has a grease port. I shoot a couple of squirts of grease in it once a week.

Anyone know what the recommended timing of lubing the swivel is? Guy at Landa shop told me every time I use it, but that just sounds nuts.

My swivels don’t have zerks but I’m a firm believer in grease until it runs everywhere. My boat trailer tires are coated in black grease from the bearing buddies.

Don’t know if this will help but, the last GP surface cleaner I purchased came with a filter that went before the trigger gun. I have to disassemble it every so often and clean it when the surface cleaner starts to run sluggish. 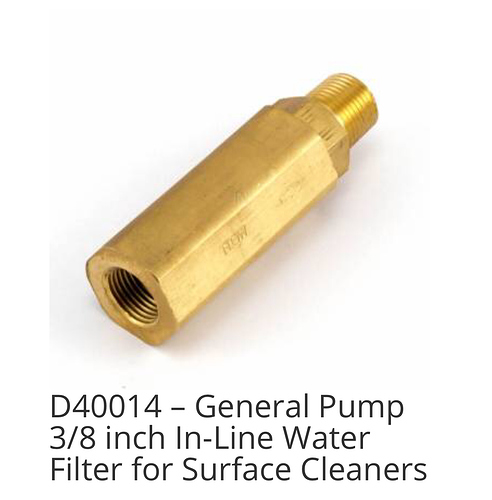 Hmmm. Never seen that. Thanks for the tip. I’m using it on a decent sized storefront walkway this Sunday. Thus far I’ve changed the nozzles out only. Will see how it do

Changed out the nozzles and it spun right up. Though I had the angles off as I noticed fine lines when cleaning and not a lot of hover power. The slit should sit inline w the tbar correct? After I adjusted it sounded and cleaned a lot better. No slow mo turns. Though I am planning to swap out the swivel.

Can you define swivel vs swivel assembly? I take it the later being complete new swivel, mounting and TBar? And the former just a rebuild kit? Also is there a way to determine if it is a hammerhead or just a GP surface cleaner? I bought mine like 4 years ago, don’t recall exact product name but the unit and replacement parts are exactly identical as hammerhead.

Side note: I did not heed advice given here and the unit did not spin at all. Not even w a kick start go figure

I assume it’s a three bar? Those 25020’s are the wrong size otherwise…(you can’t get 5.5GPM through 4GPM’s worth of nozzles)

On Monday my smaller SC was spinning slowly, I was about to order a kit, but I took the spring clip out, flushed the bearings and re-greased it and it’s goes like a new one. (This smaller machine has no grease nipple like my 20”)

Anyway, it’s only a small spring clip and three bolts - don’t buy anything until you do the basics.

Blocked or partially blocked nozzle. This can stop it rotating completely or slow it down.

Turn it over and hold the bar with your foot - check for leaks at the nozzles, the bar itself and the weep hole. (If it’s the weep hole, you need to change the one rubber seal, easy)

Recheck the nozzles are in line with the bar.

After that it can only be contamination slowing it, or the bearings have gone. If the bar wobbles up and down, this is a sign that the bearings are wearing. A little bit is quite normal, don’t worry about that.

Generally, it’s a curve - that is, the swivels start slower when brand new, then they work good as they should- then they start to fail.

Can you define swivel vs swivel assembly? I take it the later being complete new swivel, mounting and TBar? And the former just a rebuild kit?

Sorry Brother, weather AND business too good to slow down this week. OK, I bought a bearing. Broke my heart. Bought assembly, and if I remember corrrectly, screwed my bar into it AND tapped it into place in my Hammerhead, screwed it down AND voila! BOOM CHACKALAKA! ASk for the assembly. OK?

From General Pump: “Grease the swivel with one or two grease gun pumps every 200 hours (or once about every 30 days of use)”

Thanks man. That is close to what I am doing now. Every 3-4 weeks shoot a few squirts. I do my reels at the same time as well.

Every 3-4 weeks shoot a few squirts.

THEN THAT AIN’T IT!

Trash got past your filter at the quick connect but failed to get past one or both of your nozzles. Either clean or replace.

Not to hijack your conversation… I’m running a 8gpm 16" BE I use it for curbs only. I tried preplacing the bearings in the swivel but ended up purchasing a new head. I have (2) new 4gpm tips. For some reason I can hear an RPM shift through the surface cleaner. it seams to not clean as good. Even with it weighted down that thing wanted to fly. now not so much and I have to move slower.

Not sure if it may be an unloader thing or not. (K7) by the way.

Maybe drop orfice size by half GPM? It’s been a while since I’ve been on this platform

Hey friend. Glad to see you back