I’ve been using the Mechanix Fastfit gloves for a while but the thumbs keep blowing out on me. What are you guys using these days?

Hdx dual layer nitrile gloves. Cut the thumbs off the mechamix and use 1 of these under the mechanix.

I wear callouses as gloves. One fist of iron, the other of steel. If the right one don’t get ya the left one will.

But when I’m not ten feet tall and bulletproof I just wear the nitrile gloves I buy from my chem supplier.

Ok so nitrile. Now it doesn’t sound like they’d hold up when rolling hoses, which is what wears out my current gloves?

Mine hold up fine but they’re THICK. I normally wear an XL glove but next time I’m buying the 2XL because they’re a pain to get on. But I always have a microfiber rag in my left hand when reeling up my hoses. Sort of wipes them down as I reel in the hose.

Same here. I just wear the nitrile, nothing else. I havent evolved into another glove if there is such a thing. Hdx have a big pack fer $10.

I use a rag for the reel like Texan, washing with gloves-negative.

Same with the rag, no gloves

The Scott’s rubber coated gloves from Lowe’s hold up well for me.

I hate the way my hands smell with bleach on them. My hands arent the most thick skinned, but I do seem to find the sharpest corners on everything. I could cut you with some parts of my hands that callous up.

I use the grey hose, it isn’t smooth so it wears a hole in the thumb in short order.

I use the grey hose too. Use a towel.

I use Youngtown Utility gloves.

For nitrile, I like the Black Lightning brand. They have 6 mil fingers and 5 mil palms, so they are pretty resistant to accidental tears and wear.

Speaking of PPE, am i the only one that wants to be responsible and show good example to employee(s) and wear goggles, only to have to remove them after 30 seconds of good intentions because they’re all foggy and you can barely see what you’re washing? I tried many kinds of goggles, all the same…
Has anyone found a solution to that?

I’ve been using these, protect my hands from most things, seem pretty sturdy. Been using them for several centuries now…

I have a note from my reading about using shaving cream to stop glasses from fogging.
I don’t have any experience myself, but maybe use that for a search on here…

Where has this been all my life??? Just rolled up my hoses and used the towel. I am happy now. Thank you.

Glad it helps. I’m sure I learned it reading on here.

t isn’t smooth so it wears a hole in the thumb in short order.

That’s why I like the hose company hose. It’s smooth. 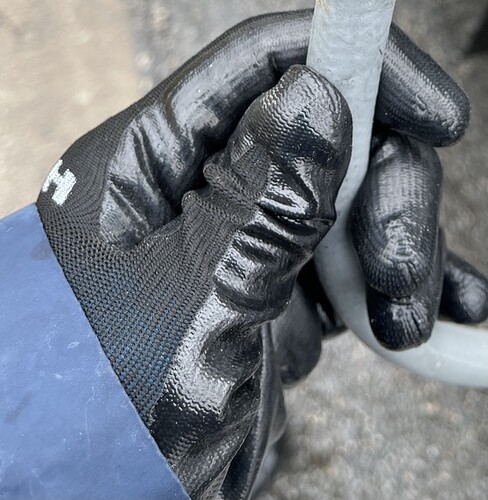 I reuse the handy gloves for about a month (wash them when they get real dirty) then I toss them. I toss the nitrile gloves after every job.

Nitril gloves protect my hands from chemicals mainly and liquids, and the handy gloves have a thicker rubber layer to protect from the rugged stuff, chemicals as well, but the top part of the glove is also very breathable since it’s a weaved poly material and doesn’t make your hands that hot. The handy gloves also protects the nitrile gloves as those rip really easy I found by themselves. Handy gloves aren’t that thick at all so no limited range of motion like the thicker gloves sometimes have