I put this post together as a thumbnail how to repair a crossed threaded spark plug hole.

I bought a new to me pressure washing trailer in December with two Kohler EFI systems on it: one is an 8 GPM the other is 6 GPM. Upon inspection they both cranked right up and ran great and me being me decided I would go completely through the two systems on the trailer, do a normal tune up; plugs, fuel filters, fuel lines, oil and air filters. The first plug I went to remove was TIGHT and I knew something was wrong. The plug was severely crossed threaded and you can see from the picture that is took a good chunk of aluminum with it. 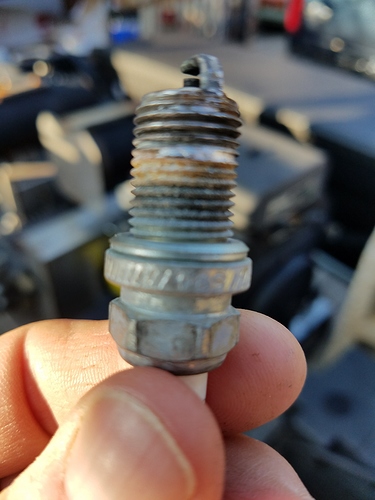 At this point I had two options; 1) use a standard tap and try to cut new threads but even well greased there is high percentage chance shavings will end up in the cylinder 2) insert a heli-coil with a 100% chance of getting shavings in the cylinder.
As you can imagine neither of these options was appealing. That said it can be done I just wanted to avoid it if possible.
I looked on line for another solution and found a tool called a Back Tap. It works the same way a regular tap does but it is inserted into the head and it is run back out so it minimizes the chance of shavings ending up in the cylinder. . 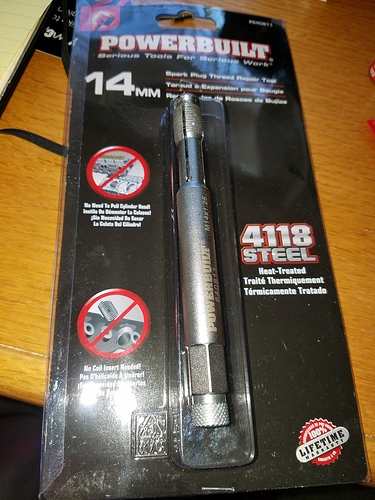 Here it is expanded.
https://photos.google.com/photo/AF1QipNSJjwqa0Q9zxx2DKR-DdplXIjoaXqrh6ej3A_3
It worked like a champ. The plug now fully seats in the cylinder the way it is supposed to. The interesting thing is it actually ran fine but if look at the original plug picture it was running lean on that cylinder.
I hope this doesn’t happen to any of you but if it does here is a viable way to repair it yourself. It took me about 20 minutes to do the repair. The guy I bought the machine from does not do his own maintenance, another reason why I do.

I hope I never need that, but thanks for posting it, in case!

Thanks. Pictures were a PITA but I think it gets the point across. I didn’t get into it much in the post but I was amazed at how the Kohler ran with the plug only partially inserted. That plug has a ¾ thread length and about a ¼” was all the was installed. Now if it would just thaw enough to use it…