An advertising company called GreenGraffiti has come up with an ingenious way to provide clean marketing messages: reverse graffiti. By putting company-branded stencils on dirty sidewalks and pressure washing the ground, the stencils create a pattern in the shape of the stencil, often a company logo. Customers include Starbucks, Virgin Mobile, Patagonia, Range Rover, and Sony. But city officials in San Francisco are unhappy with this form of advertising and are seeking a way to have it banned. 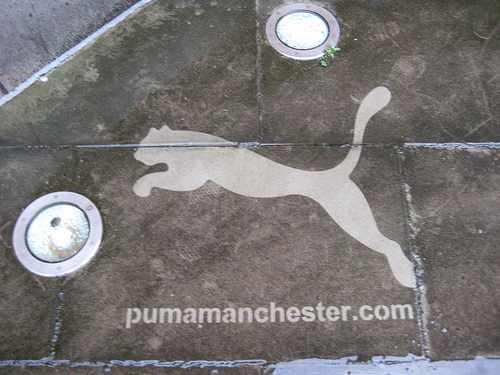 [/FONT][/COLOR]
[COLOR=#444444][FONT=Verdana]In fact, reverse graffiti can be equated to seeing “wash me” on a dirty car window. While swiping a finger across the surface to create the “wash me” message cleans the actual surface, most would agree that it’s an eyesore and rather immature. Companies reverse washing their logos onto sidewalks with this type of graffiti may face the same backlash.[/FONT][/COLOR]
[COLOR=#444444][FONT=Verdana]Despite the potential “annoyance factor,” this type of green graffiti can potentially gain favor if advertisers show willingness to clean up other parts of the city or donate some funds to city projects where they’re posting their messages.[/FONT][/COLOR]

I know some of you do stenciling for either your own company or for advertising other businesses.
How is it working for you? Any problems?

Sure have. It turns out many cities and counties (at least in my service area) have a law or ordinance on the books against what they call “off site advertising”. In short, a business can not advertise on any other property but their own - and the kind of advertising done even on their own property has to pass through a review committee. It’s totally insane! Normally the enforce the law to the full extent, but the fact that they legally can leaves stenciling strictly for demo uses.

Side note, I was told they could enforce this ordinance for people who have wrapped or lettered vehicles to keep them from parking certain places.

Where do you get the stencils, what are their costs, and what would one charge for this service?

Where do you get the stencils, what are their costs, and what would one charge for this service?

I think Pete sold them from Sunbrite supply…
I never liked that stenciling idea. It looked cool but (showing my age) people can be pricks. You get one of those 22 yr old store manager type who now calls your company and says get that off of “My” sidewalk and I want the sidewalk back the way it was where everything looked uniformed… Or else…yada yada… Telemarketers are bad enough but now to do an unsolicited stenciling on a sidewalk… It looks like to many headaches IMHO.

Now where these can work is if your ask to do a demo where you clean a small section of let’s say a parking garage… Hmmm I kind of like that one:)

My thought was more for a few of the storefronts that i do. Have their company name made into a stencil, not mine, and do it as a service for them

A good stencil is going to cost about $300. That puts the idea out of the budget for many businesses.

My thought was more for a few of the storefronts that i do. Have their company name made into a stencil, not mine, and do it as a service for them

Interesting but two potential problems with that. One the Stencils will run you at least a $100 if not alot more so a decent one is not cheap. The second thing is you have to keep a part of the store dirty for these stencils to stand out…

I may get one because in this thread Just to use during demos for those higher paying jobs. Good thread.

Being equipped with all the tools to clean surfaces that collect dirt, some on-line re-search and a Skype relationship with my friends at Green Graffiti ,the lure of reverse graffiti was irresistible.Did a stencil for the Saints and got many request to place Flurdelee’s on people’s driveways and sidewalks.I have visions of marketing Clean Street Ads to anyone who is looking for a bold and green way of advertising and/or big events such as festivals or even the Super Bowl(in N.O. 2013) to catch the eyes and feet of the masses.Still exploring how to make $$$ with this side venture so won’t be giving up my day job as a commercial pressure washing grunt but I"m having fun with new ways to push H2O and swing a wand.

Good to see you, Joe.
Hang around and lay some wisdom on us and join da pawty.

The “one and only” Joe Burke is in the house. I remember Joe jammin with someone at NOLA:cool: Welcome to " Say it is so" Joe!!

They are from Canada I believe. They hired me in 2010 to spray stencils in downtown Phoenix. Made some good money. The stencil said R U ORNG which was the Phoenix Suns motto for awhile.