Some People Hate Their Part Time Job - I Love mine

As many of you know, besides washing I’m also a driving instructor for the BMW Performance Center and volunteer a couple of weekends a month for a charity group out of Charlotte that goes around the country teaching advanced driving skills to teens. It’s become the #1 Teen driving program in the country. People have no idea the number of teens that are killed or injured each year driving. It’s an epidemic. So I spend about 3-4 days a month there, usually on a skid pad. I love it.

At BMW we also do teen and adult car control programs as well as advanced driving programs. But I’m only there about 8 days a month. At the end of our schools though, we give the adults a hot lap which entails us driving at fairly high speeds around a section of our track, often sideways in a M3 or M5. One of my clients shot this video the other day and sent to me today. I know a few of you have asked about it in the past, so here you go.
https://photos.app.goo.gl/6vXjY9ydbaXzbQsj9

That’s a necessity, the other just for fun, lol

That camera doesn’t do your driving skill justice. Hard to capture it but I could tell you were flying.

Give me a link so I can donate to the charity ?

…Some say that he has to take his shoes off with an allen key, and that his new year’s resolution is to eat fewer mice. All we know is he’s called @Racer

I think I’d swap those jobs and drive full time, and pressure wash only 8 days a month!

Brings back memories. I went to the Bob Bondurant School in Chandler, Arizona and the Jim Russell School in Mont-Tremblant, QC Canada…many moons ago.

Now I get the name. I figured you were just a pressure washing racer, but no, you’re a real racer. It all makes sense now. It’s a great thing you’re doing here, and it’s awesome that you enjoy it while giving back. Congrats on being a good person

Mont-Tremblant was a heck of a track.

I only remember a little of it as it was about 25 years ago. We spent the first half day just learning to heal/toe/downshift. Our laps were charted and we had rpm limits that increased through the 3 day course. The goal was consistency while getting faster. What an awesome time. Even better that it was free! It was a great city to visit and see some of the sites.

That car sounds like an automatic🤔. Not sure I could drive a M3 or M5 unless it was manual. They seem to be getting away from manual cars which is sad. Reminds me of my 93 RX7 that I modified up to 430 wheel hp. Never did get it on a track like in the video but I did have some fun with it. That was over 20 years ago

The real question is do you drive exactly the speed limit Ike every other “older” person on the road? Or do you fly around?

I would think it would be hard for race car drivers to maintain the speed limit! 55 is just slow once you’ve driven 100 a bunch.

Actually you can order a stick in pretty much any bmw. Most performance cars, from most brands, come with a dual clutch sequential gearbox now with paddle shifters, though I tend to use the gearshift for downshifts. Hard to break old habits. It’s sweet. Shifts in like 80 milliseconds and you can adjust it. Can also select automatic mode if you prefer. Plus you get a launch control mode.

I’m actually pretty sedate most the time on the road, even when I was racing full time. In fact I use my cruise control all the time. Never felt the need to go fast there, probably because I was on a track a lot and getting in a street car was my time to relax. Probably haven’t had a ticket in last 25 years (knock on wood). Plus there are way too many idiots on the roads.

One of my old co drivers texted me this pic real early one morning from the Porsche GTR he was driving at the time. He was on his way up I-81 to do teach at a school the next day.

But he was always a maniac on the street. He was from Baltimore and I remember going to thru downtown Baltimore one time with him over 160 in some Jaguar racecar that someone from Europe had sent over here for him to sell. My wife wouldn’t ride with him in his Tahoe. We had a race in Homestead one year and we carried our wives and kids and were going down to the Keys for a few days before the race. We had each picked up a rental car at the Miami airport so on the drive where you go over some long bridge in the Keys we started bump drafting on that pretty narrow 2 lane bridge. Too say our wives weren’t impressed is an understatement, lol. 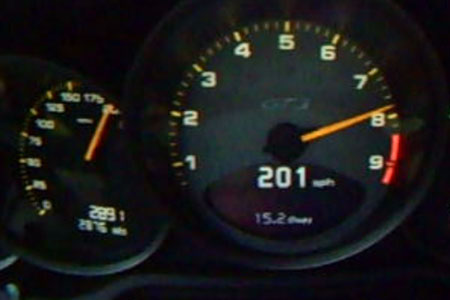 That bridge would be the 7-mile bridge. Not sure when you were racing, but I went to many, many races down there. I loved just north of “downtown” Homestead (like a mile and I could hear the cars practicing days before the Saturday and Sunday races. That and watching all the F-16’s fly over the house and the occasional A-10.

Was your family there when Andrew came thru? I think the first time I raced there was maybe 95-96. Wasn’t a whole lot there then the first time I went. You could still see a lot of damage. Never one of my favorite tracks, their infield road course was kind of hokey, We’d run about 2/3 of the oval and then drop down into the road course just before turn one and then come back up onto the oval just after turn 2.

I use to love the Gran Prix of Miami when they held downtown. It was always a good time even though the course was tight but still fast. I remember they had to weld the manhole covers down because the ground effects on some of the cars would throw the man hole covers up in the air. No fun if you were in the car behind, lol But I always liked street circuits anyway.

Yes, we definitely were there. We stayed at the bank my dad used to work for, during the storm. We lived right off of Krome Ave, which runs straight through downtown. Yeah, I remember the course not being overly fantastic.