Intend to buy a bag of Sodium hydroxide to use to strip my deck before staining. Bought some oil stain that ran off the wood, an indication to me that the fading stain already there is probably water-based (Correct, @Racer, my wise mentor?) and now I have a mess on my hands.

My question is can I use my soft wash (Delavan) system to apply the NAOH, and at what dilution rate and what surfactant would be best? How long would be a suggested dwell time? I recently stained the house adjacent to the decks that need treatment and staining, so I would hate to mess that up. Should I neutralize it with oxalic before I rinse off?

I cant answer your mix question but I can offer a suggestion. You can always cover what has been recently stained with some plastic. It’s a little work but you wouldnt want it to get spotted.

Put some alcohol on rag. Wipe a section- if it comes off it’s water based. If not it’s oil based

What Rick said plus Sodium Hydroxide is better for oil based stain removal so you may need to boost it depending on how fresh the current coating is.

Bought some oil stain that ran off the wood, an indication to me that the fading stain already there is probably water-based (Correct,

It’s an indication that your wood wasn’t ready to accept stain. Not what type of stain was there. Wood has pores, and if those pores are full you are SOL.

My question is can I use my soft wash (Delavan) system to apply the NAOH, and at what dilution rate and what surfactant would be best?

HUH? Okay, I don’t know what a Delavan system is but let me say that most caustic strippers are around 10% caustic soda. I have sold some that was 25% but that was for 4 layers of paint and a bad situation. You don’t need a surfactant…what is that going to do when it come to stripping?

How long would be a suggested dwell time?

usually works in under 15 minutes

Should I neutralize it with oxalic before I rinse off?

Wait, what? Are you talking about putting oxalic on top of the caustic? Please don’t!

My question is can I use my soft wash (Delavan) system to apply the NAOH, and at what dilution rate and what surfactant would be best?

Just asking about best application method. I assume rolling it on might be great for the horizontal surfaces, but what do I do about the vertical surfaces such as hand rails and support beams? Delavan is the pump of a softwash pump system called the Fat Boy.

Butyl or glycol monobutyl ether or buytl cellosolve are all the same thing but is basically a surfactant that can help increase the softening power of the sodium hydroxide. I can’t tell you what mix you need, that is strictly a test scenario. Dwell time will also be a key factor, longer obviously having a greater but not always better impact since too long will induce furring.
BTW, how big is the deck? We did one not too long ago that had so much solid stain on it it was ridiculous. It was about 10x13 and we used a 4.5" Diamabrush on an angle grinder followed by an orbital sander with 60 grit. Took about 4-5 hrs total. No chems involved, deck looked brand new.

@MrSparkleVA Still no pic so we’re all shooting in the blind here. Yes you can use your Delavan, but throttle it down some, don’t need that much flow.

OK, pics this afternoon. This decking is mostly covered, so when I took some rubbing alcohol to a handrail, I don’t know whether it was dirt that came off or stain, in reference to whether it’s water based or oil. I couldn’t get the stain down to wood, if that’s any indication, @Racer. As for the ether, @MDA1775, where would I find such a thing?

Butyl or glycol monobutyl ether or buytl cellosolve are all the same thing but is basically a surfactant that can help increase the softening power of the sodium hydroxide.

They are all the same thing, but they are a solvent. they do not have foam or bubbles and need help getting into water. Most commonly used in degreasers like purple power.

in mixing NAOH with H2O, would I do so by weight,

All formulas should be done by weight. Especially since NaOH is twice the weight of water.

Still no pic so we’re all shooting in the blind here.

This first pic is of a solution of oxalic acid that I put on the wood, and how it pooled up: 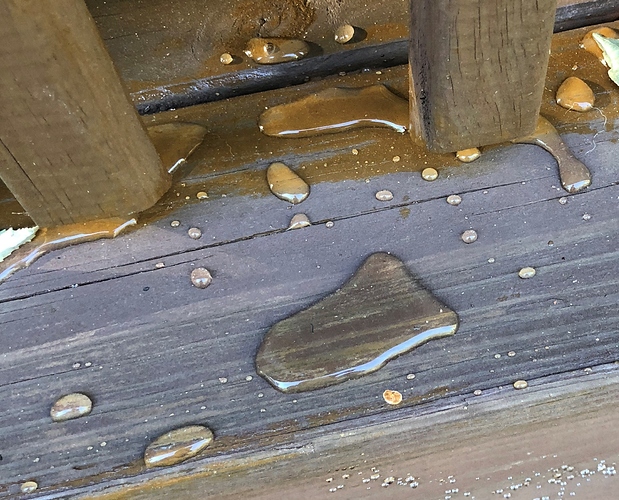 You can also see at the top of the photo how the stain (easily noticeable because it’s the wrong color. 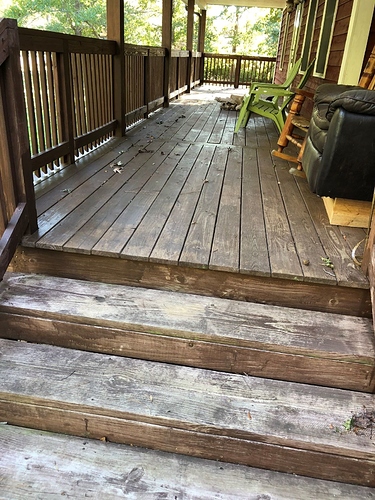 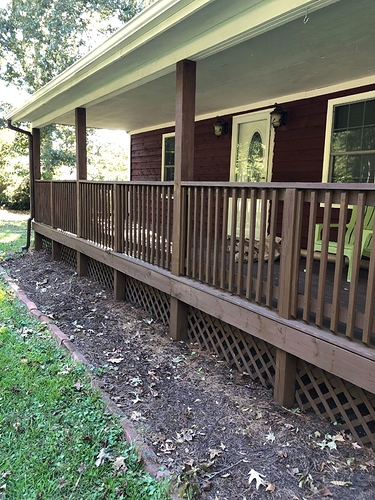 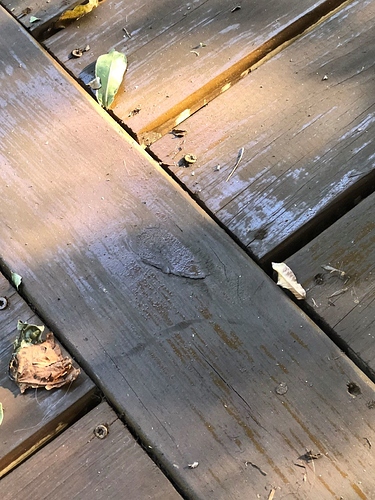 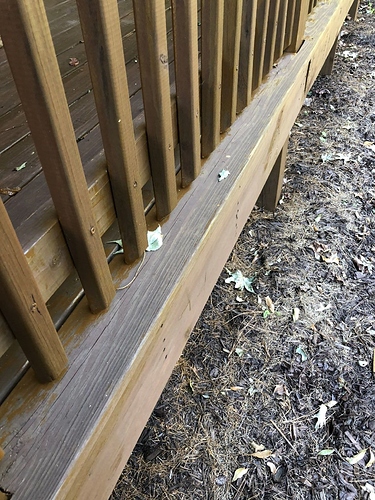 So, it appears that the only thing I can do is strip what’s on it to empty the pores, right @CaCO3Girl?

@MDA1775, Mark, how would YOU handle this? There’s a HUGE farmer’s porch in the back in the same condition.

You for sure have to strip it if it’s beading up like that. Good luck, some stains don’t come up with normal strippers.

That’s when you hire someone to do it and it becomes their problem. I don’t wash my own house

Are you going back with the same color? Pickets and outer band do’t look bad.

George, You’ve got several choices here, reason I said originally, it depends on what you want to accomplish. First you’ve got to realize that doing decks, especially ones that have been previously stained/painted or whatever is sometimes like going fishing. Sometimes fish going to jump out of the water into your net. the next day they might turn up their nose at their favorite lure/food. It’s often some experimentation involved to get the right mix. No 2 decks are ever the same.

it’s hard to tell from the pics but almost looks like paint in places, or at the very least, like a solid stain.

I’m sure @MDA1775 may have some more and probably better ideas.

Stuff like this is why I like the easy and quick money. Free time is far more important to me than suffering through junk like this. I physically shuddered when I saw the pic. I’m going to try some of the stuff @racer and @mda1775 recommend maybe once or twice for the sake of trying something new, but I referred out a cedar shake roof today to a different company simply because I don’t want to deal with it this close to the end of the season. I’m lazy.