First time posting… Tried to do as much research as I could before making an account. Been active on forums since early 2000’s and I gotta say that there is so much good info on this site. It was easy enough to find topics on the info I needed… It’s actually refreshing to see people DISCUSSING different techniques, mixes, all the juicy stuff.

Got a 4gpm belt drive simpson for DIRT CHEAP. Threw it on a 4’x9’ single axle that I got for $800. Figured this isn’t the worst starting point…

3/4" In 1/2" return to tank. Using some PVC over the hose to the chem tank. Little dip’n’go action there.
Gonna throw it in the water tank and rinse when done.

I scrapped the OEM bypass and just plumbed it back to the buffer tank to a 90 that’s pointed at the tank wall. Got about $2500 into it as it sits.

Any advice, criticism, or useful input would be much appreciated… Except on my welds. Not my welder… Ran out of gas, the wire wasn’t the right diam, the feed would cut in and out… lol 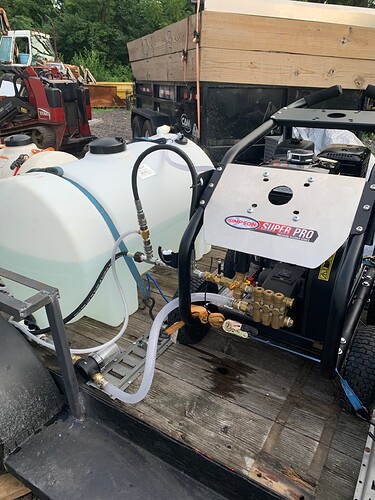 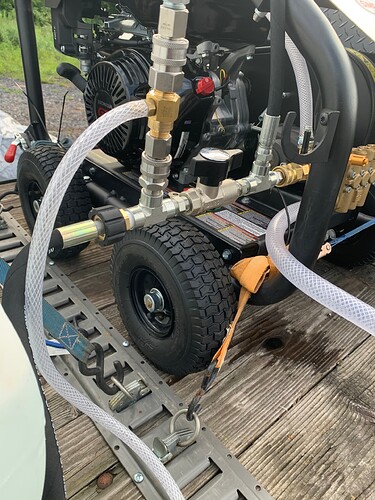 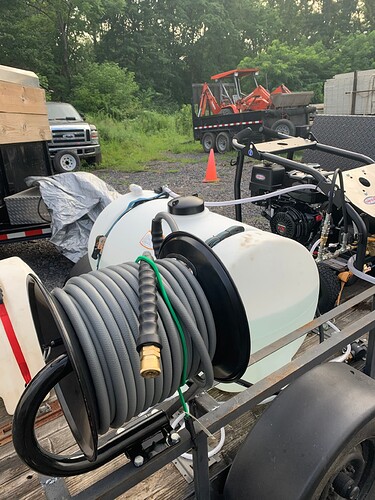 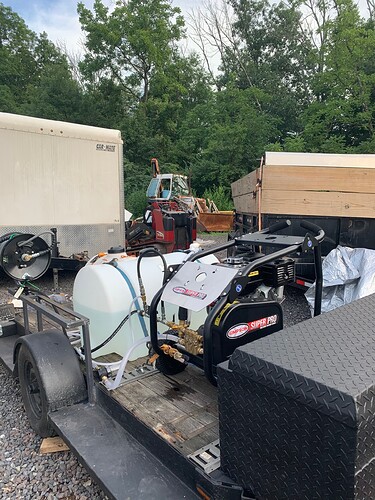 Thanks for the tip. If I mount it at the reel would i need to secure it somehow?

Ditch the hose coming off the injector and use wire reinforced suction hose. Clamp it down pretty hard with a hose clamp. Keep several spare injectors ready to go.

What’s with the M22 hose coming off the bypass?

Get a three way valve on that supply hose so you can dump water.

@CHogue is right. That’s a fair amount of weight hanging off the pump. Just get you another short piece of whip hose and mount the injector bypass on the rail between pump and reel. Don’t see a great place to mount on the reel, weird reel, but that’s ok. Get a spare injector or 2 and make sure one of them is a 1.8, which will pull more soap if needed than the 2.1.

Ditch the hose coming off the injector and use wire reinforced suction hose.

You talking about the black hose going from the injector bypass to the hose reel?

Just get you another short piece of whip hose and mount the injector bypass on the rail between pump and reel.

Whip hose? Is that a term for a length of hose?

Thanks for the replies guys.

No the hose going to your injector, replace it with a wire reinforced suction hose. Mine kept getting soft and collapsing.

The whip line to your hose reel, just never seen someone use an M22 for that.

A high pressure hose 4000-6000 psi that goes from your pump to your injector bypass and/or your reel. Basically just a short piece of hp hose.

It’s what was on there and what I had on hand for fitting was less than ideal lol. I do have extra suction hose so I’ll be replacing that. Just have to get some fittings.

U should consider.using an unloader block

Took some of your guys advice. Added a length of hose from the pump. I removed the factory injector. Mounted the injector bypass to the steel frame that I added. Haven’t had an issue with the m22 fitting yet so for now I’ll use it. I did add a quick connect. Adding another ball valve for draining here soon. Don’t have the time today.

Thanks everyone for the good advice.

You guys see anything else that really needs fixed? 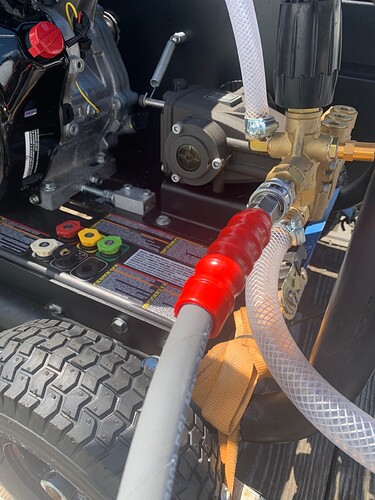 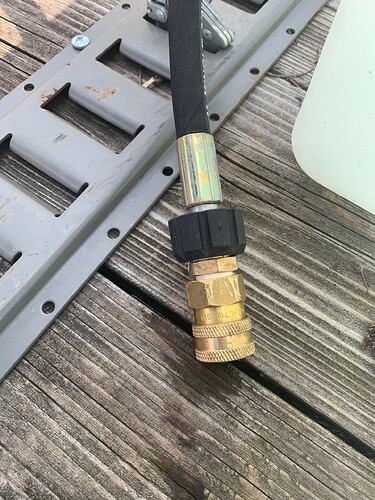 Thanks for the tip. I just assumed if it fits it works

. Would that give better flow or something?

more flow, less friction loss, less chance of hose disconnecting when you are soft washing and it snags on something