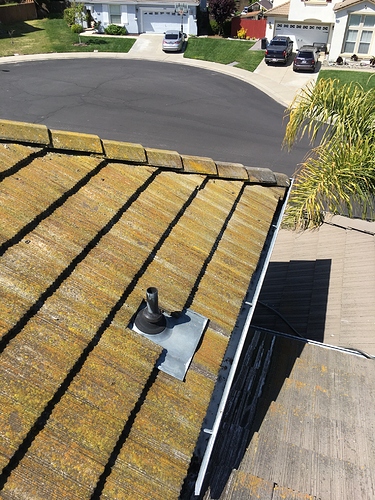 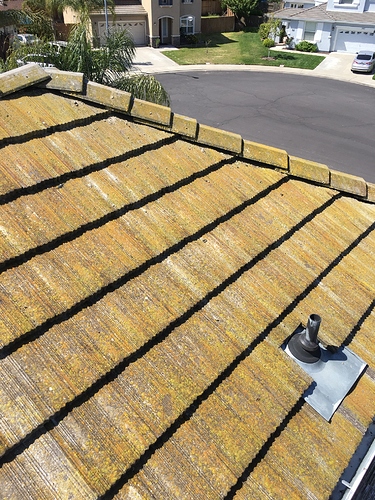 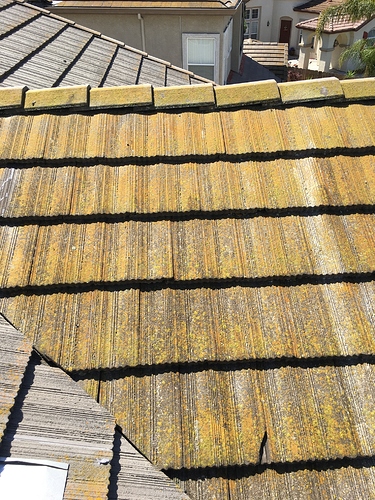 The pictures above are after shots on a tile roof that didn’t clean up at all. I used 10% SH diluted down to 5% plus surfactant from a backpack sprayer. I have used this same batch of bleach, before and after this cleaning, and it has worked just fine on heavy moss. This roof was not moss, but an organic growth that was green and red, flat against the tile. When I applied the solution it became very bright red; by the end there was no improvement at all. I then tried a much hotter mix on a small area; still no effect at all. I should add I allowed the initial application to dwell around 10 to 15 minutes before taking the pictures. Any advice would be appreciated.

This roof was not moss, but an organic growth

If it’s organic growth SH should take care of it. If I had to guess you probably weren’t able to apply enough mix using a backpack sprayer. Some growth really needs a good soaking.

You really ought to invest in a 12v. Somebody on here had a backpack sprayer leak and ended up burning his back. They all end up leaking eventually especially when using SH.

I am naive about the term SH, please define. The roof growth appears to be a form of lichen. What city and state its it in. Can a local university extension agent be of help on this problem?

Buying the 12v set up is in the works. But I did soak this thing completely, and I went over it more than once. It was so ineffective I assumed I had bad bleach. But that can’t be because I used it on a roof wash a few days later and it did great. You are right about the backpack, though. I got a burn on my back as well a few days ago.

@Racer or @garry.cooper will be able to help you better than I can. We don’t get anything quite like that where I live. Garry is in Florida so deals with tile quite often. If he gives you advice he might make you take him out to eat at the all you can eat Brazilian steakhouse.

That looks like lichen to me.
It does take quite a while to fall off. I’d go with a stronger mix. Roofs are generally very bad in our area (pacific northwest). I start from 6% on concrete tiles and often do 7% or even 8%. I always do 6% on asphalt.
When it’s that hot and sunny (from your pic), prewet is a must. I’d prewet it twice. Really cool it down.
If it’s like this heavy lichen, I’d talk to the customer, set the expectation right.
I was told by a pro I trust that sodium percarbonate cleans lichens better than SH. I have never tried it though. I’d offer the customer an option of me combing back to treat it again with SP, just to make it work faster. I never seen anything like this though. Most roofs I clean are heavily infested with moss, some have a little lichen, nothing like that.
Don’t trust me too much. I am new too. Just my $0.02 and telling what I know.

I should restress that I am not sure whether it’s lichen or not.
It would be very strange to see lichen grew like that. So, it might not be lichen.
If it’s not lichen, what I said was just useless. expect the prewet part.

As @marinegrunt said invest in a 12v for doing roofs. A backpack sprayer just doesn’t have enough volume coming out of it to saturate the roof, if it’s really hot it will linger on there for all of 30 seconds. It’s the same principle as pre or post treating concrete on a really hot day with a backpack sprayer, you look back 10 feet and it’s starting to dry. Always remember, when it’s wet it’s working.

It didnt seem like rust. It was shaped like lichen but red, and then became very bright red when i applied chem

That is referred to as artillery fungi. SH will kill it over time . Along time . Using a mix with caustic soda bead in it will kill it in a few days . That may beat the worst case I’ve ever seen
Use one cup per 5 gallons of 50/50 mix and reapply. I wouldn’t be surprised if it takes more than one application.

That’s helpful. Thanks. I’ll add some sodium hydroxide to my supplies.