Question for you guys that Seal Concrete

Got sent these by homeowner kind of near me. Concrete poured in Feb and then sealed. Not sure how long they waited to seal, am finding out. Does this look like failed sealer or I know it could possibly be the concrete underneath. He had contacted me about mud stain, but I think he may have bigger problem. Looks to me like maybe concrete hadn’t fully cured before sealer was applied. But I never seal concrete, so don’t know. @gbattle - you around? Think maybe because it was a winter pour contractor may have used too much CC to get to set up quick, especially since on pretty steep hill??? 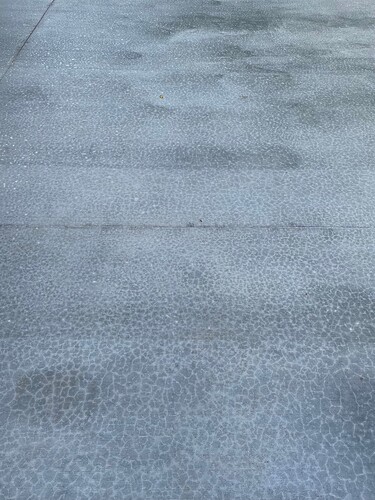 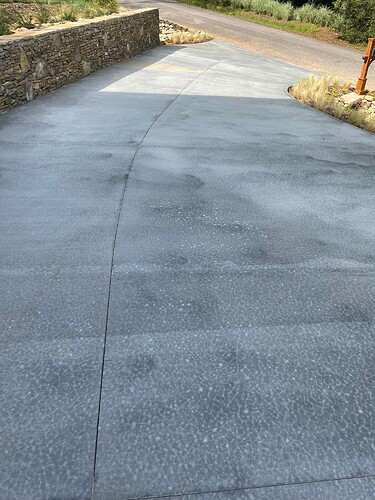 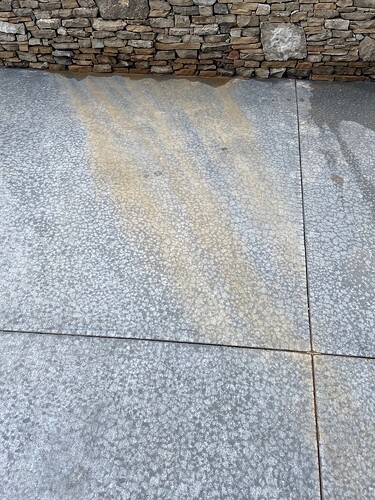 I see that often on front porches. Like they use a different mix on the porch than anywhere else. I’ve often wondered what causes this

Therein probably lies the answer. Typically the front porch and the driveway would be poured at the same time. However the front porch is typically covered with little to no sun. I bet it is being sealed too quickly. The driveway gets lots of sun and normally cures (not in this case) but front porch takes 2-3 times as long. I think you may of nailed it @Racer

I’m sending this pic to my 35 year sealing veteran. I’ll update when I hear back.

It’s likely what they used here.

It looks like they did a poor job of applying the sealer–overlap marks, pooling. I see it quite a bit up here when customers (or hacks) try to tackle it on their own.

Surface sealers can be challenging to apply if you don’t know what you’re doing.

anyway to fix it?

If it’s solvent-based, you can go back over it with the same exact material and it’ll blend it.

Basically, it’ll melt the first coating and blend in with the second coat.

If it’s water-based, you’re looking at stripping it. Which, of course, will be even more challenging with new concrete.

Thanks Mike. I told him to call his contractor, which he did. I’m not touching it. Almost an hour away and I don’t want his problem to become mine. But I am curious about it. I told him to find out what sealer it is so we’ll know. I do like to learn stuff.

Some concrete finishers don’t take pride in sealing concrete and most homeowners figure they can do it themselves with something from a big box store. It doesn’t look like it is from too much calcium chloride being added. The sealer here wasn’t applied properly. It was applied uneven and splotchy.
Front and back porches are pored while the home is being built. Sidewalks and driveways are pored after the home is built. Porches and covered carports are usually trowel finished and cure darker. Sidewalks and driveways are broom finished and cure out lighter.

Thanks. What’s so bad is he just bought this house about a year ago and tore out a perfectly fine large driveway because he didn’t like the angle it came off the road. Pretty big sucker too, at least about 1500 sq ft from pics I saw in old real estate listing. He didn’t see this one till about a week after it had been poured and it had already been sealed by contractor.

How are things down in Macon? You keeping them hopping, Don’t be a stranger. You’re input always valuable.

No problem. Glad to offer some insight. Things are going great here.

Talked to my 35 year tile, stone and coating expert yesterday. He said it looks more like a concrete problem rather than a sealer problem. He said it looks like the concrete got crazed (honestly I’m not exactly sure what that word means) but he thinks it could be an environmental issue when concrete was poured (improper temperature placement) also could of been over tooled or stayed in the truck for too long or with too much water. There’s other factors but to narrow it down he would need to know what kind of sealer was used, how long the concrete cured for and what temperature and humidity it was when the sealer went down. We collaborate together on a lot of jobs. I stick to cleaning and he does the sealing. There’s been several situations where I’m asked to come out to try and remove the old coating that was just laid down but didn’t look right because the temperature and or humidity was not ideal for the application. Also the application process itself can cause issues if not done properly. He will not lay many types of sealer until about this time of year (in Cali weather). Walking away (as you noted above) is probably a smart idea.

I thought there was some crazing.
I’ve seen aggregate spots in the past when we would return to strip boxing and cut but it would usually even out as the concrete cured.

I don’t think it’s crazed. I’m familiar with that and they are generally tiny cracks. From what I can tell in pics, don’t think that’s what it is, plus I’m sure this guy would have mentioned.
I think they didn’t let dry enough. Where he’s at, is up in mountains a little ways, and mid Feb it can get pretty cool. I’m thinking it’s still a sealer problem. Curious to hear what his concrete guy has to say. Will pass along when I hear back. Assuming he can actually get concrete guy back, lol.

I’m in some sealing groups on Facebook, they may have an idea too?