runs fine, until the water line is turned on, then it stalls out. Any ideas why?

above test is without hose attached. Ive yet to purchase hose and gun. B&S tech support tells me I can operate it this way to test its function.

Here is the washer in question. 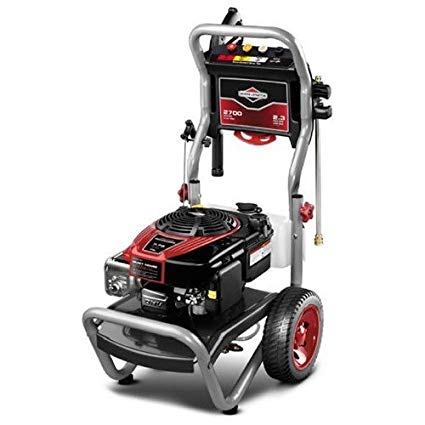 If it aint carb related, try this.
Got unloader working

How long you run it before you turn the water on?

They want you to buy another one.

runs fine, until the water line is turned on

??..so you run it without the water on?..lol. Why don’t you turn the water on first and let water flow through the pump for a few minutes and then then the machine on…your pump is probably destroyed.

unloader valve is very hard to push in, but then it does spring back out. I had to use a bench vise and you can see how it pushed into wood, before the valve pushed in. Every time.

I watched that video, which led me to this video https://www.youtube.com/watch?v=xNjdj-mLcc4

This guy claims you can run it without water and it will do no damage to the pump, pretty thorough explanation, with a pump breakdown. My question is this, is he right? Or is this just for small PW rigs?

Man this site is getting to be a time sink and a half, the rabbit holes have rabbit holes, just trying to learn.

I don’t think I buy his theory. I’ve never heard any manufacturer whether it be a pressure pump or water pump say you can run it without water. Everyone I’ve ever seen say specifically to not run them without water. Those pistons are creating friction against the rubber seals which is going to create heat. He said water isn’t a lubricant. He’s wrong. It is a lubricant although not a great one. It definitely cools though. I’m no engineer though.

This would be a good one for @dperez to explain. Go to the 12:00 mark in the video two posts up.

He doesn’t see a problem running them dry because they are long gone and they have died prematurely from other causes before the end user ran into a issue with the seals on the wet end. But no doubt he is shaving countless hours off the high and low pressure seals running them dry. You can however run them dry every so often and it’s not going to hurt a thing. I’m talking about 5 seconds here and there every other day no big deal. On my machines I have to keep the manifolds dry for transit or the surging water in my tank keeps cycling my soap on and off constantly prematurely wearing out my control switches so I keep it off and we like to forget to turn it back on all the time. Cavitation is what you need to worry about taking out seals and not running it dry a bit here and there but nothing like what that guy said he was doing.

Here’s a PDF from a manufacturer stating not to run these pumps dry.

Two posts up was (on my screen) redjess’s post about using PFM oil. Did you mean two threads up?

I read a lot of things on here, but I am starting to think I shouldn’t have read some of the older threads. The reason I say this is it appears that the industry has moved onto other approaches and the things I read no longer apply, or aren’t used. Maybe I am just getting confused.

Thank you for your detailed reply. I just don’t know these systems so well and I have never considered myself a mechanic.

I couldn’t understand why he said that when I was clearly seeing seals on those pistons. My limited understanding (correct me if I am wrong) is that the pistons push the larger volume of water up through a smaller diameter opening forming pressure. The pistons have seals (which should have some type of lubrication on them). IF there are no seals, then the water would not get forced into place causing it leak back down reducing/causing no pressure?

I take no offence to someone correcting me, or teaching me that I am not understanding this correctly.

I was kidding. PFM is an old salesman term used when they have oversold what the company is capable of just to get the deal. PURE F’n MAGIC.