Does anyone use a hose crimper to repair your own hoses instead of taking them to a hose shop? The reason for asking is I’m looking into buying a machine. I’ve seen the reusable ends but would like to do a more permanent repair. I’m looking into the Parker MiniKrimp. It can crimp 1/4 to 3/4 I believe. If you have one what are you using? What’s your thoughts?

Hoses are expendable items. When they blow just get another one. One house wash pays for a few hundred feet of single wire.

I get that and I have several hundred feet of hose in my shop. I have a hard time just tossing it. I usually take it down to my hydraulic shop. I’m looking for anyone using a hose crimper for advice on what they are using.

This is the one I’m looking into 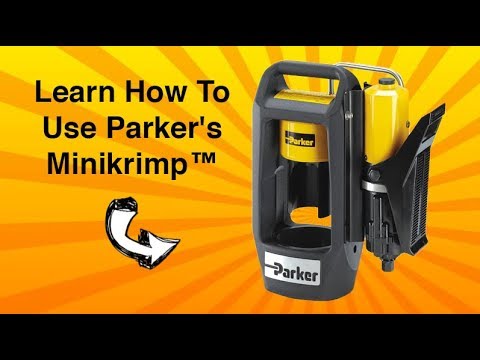 I understand that. Personally, I just have never seen the point in repairing a hose just for it to blow again soon thereafter. Especially when using hot water. Maybe if it was within the first ten feet but then you have to wonder how long you have until it goes again.

9 times out of 10 my hoses blow near my gun. I’m kinda obsessed about having every possible tool I’d ever need. Not to mention the time savings. The hoses I do have repaired usually last a decent amount of time. After it blows a second time, then I don’t use it again. Going to the hydraulic shop can sometimes take hours especially if there are a few people ahead of you. I know it’s not necessary but it would sure be nice to have.

That’s fair. I agree that you probably shouldn’t push it past two repairs if any at all. If you’re getting failures at or near the gun you need to stop pulling the hose from the gun or the end. I normally throw the gun over my shoulder and pull from 8-10’ down the hose. And the biggest thing is not yanking on the hose when it gets hung up. Give it some slack and a good flick or walk to the hangup and free it. What hose are you running anyhow?

I’m running the Goodyear Neptune one wire currently. I’ve ran everything from Rex Flex to the heavy 2 wire stuff. Even ran the JGB or whatever that stuff was we discussed on here. Yea I know the 2 wire won’t blow as easy but the weight isn’t worth it to me.

Once a hose pops (from wear, Not neglect) it’s done!

Toss it and move on.

Everytime I have fixed a hose, it quits on me after 1-5 hours…

Last year I blew and repaired the hose twice. This year the new one popped 20’ from the end, and I’ve been running 150’ ever since. It’s funny, I’ve only had to add my 50’ about three times.

Popped or not I replace hose every year. Preventative maintenance is the name of the game. It works out cheaper than fluffing around during work and rescheduling and shuffling work around when it pops, always happens on the first job or the last job. Buy in bulk if you can.

I sold hydraulic hose for years, I understand the natural inclination is to repair a hose rather then toss the whole thing in the trash can I will mention a few things: One: hose ends are made for a specific hose and if crimped it’s to a very specific measurement, too much the end pops off, too tight you crush either the outer cover or inside liner. If the liner, reinforcement or cover are damaged the hose will fail. Two: hoses can expand OR contract up to 10% in length when charged so always give it slack. Three: as DisplacedTexan said be careful how hard you pull your hose but more importantly you must avoid kinking your hose especially when you charge the hose. When I use a hose I typically twist it near the end so maybe that’s why they burst there. Four, as mentioned there are 3 components of a hose and will fail if any one of them are compromised. If an end pops off a new hose maybe the guy making it accidentally didn’t crimp it tight enough, take that one in to be repaired or replaced. But, if you’re putting a new end on an old hose you might be repairing bad hose and isn’t worth it. Last, most of us have had a blow out, can be scary but typically isn’t dangerous. But, if you have two hoses joined together and it comes uncoupled and a metal quick connect or hose end is whipping around on the charged side that could be real trouble. Think of new hoses as insurance, you don’t like it but you buy it. Other than driving to the job site hydraulic hose pressure is probably our greatest risk exposure.

I have thought about this several times. Running 4 200 ft sections 60 hours a week puts a beating on them. It’s just easier and safer to pay $20 to have one repaired by a professional. I’ll usually repair them if it fails near the end where it bends a lot but if it’s in the middle it’s trashed. After one or two repairs that hose will go in the spare hose pile or be thrown away depending on the condition. With that much pressure it’s just not worth it to take chances especially having employees using them with hot water.

I spent some time talking with the Parker distributor here in my local area. He told me that the Parker mini crimp would not work due to the jacket wear on the outside of the hose. It has to be custom crimped on another machine because the new and worn specs obviously wouldn’t match. I think my new spec is .68 and worn is .62 so the crimp would not be within spec which could cause it to blow off or leak. I get all the comments about having new hose and replacing as needed. I do all that. Just wanted to explore the possibilities of a crimper. It’s looking less like a possible solution.