Well, I’ve really done it this time, guys. I just bought a ball valve & swivel attachment for my hose so that I can shut off the water to switch to my surface cleaner without shutting off the machine. I just started using it today. It was working great, but now I have built up pressure in my machine, the line, & all the way to the gun. NONE of my QC’s are releasing because of the pressure, & the wand trigger is doing nothing at all. I think I could possibly have a rock or something stuck in my tip, causing it to build up the pressure, but I’m not exactly sure. Is there a relief valve on my General pump that I can bleed the pressure out on? Please help!!!

Let it sit for a half hour or so. It sounds like your tip is clogged. I had it happen once and I took my quick connect end and pressed it up against the trailer to force the coupler down. The tip shot about 20 foot away. Make sure you are wearing at a minimum eye protection.

Loosen a fitting until it starts to leak. The pressure will let off gradually.

Use your head, take a wrench and loosen a fitting until it leaks…30 seconds…bingo, no pressure.

Another good reason to use a flow unloader.

Had this happen yesterday when ball valve failed. @Innocentbystander method of using the interchangable gun on everything is looking more appealing. Unfortunately was using my 4gpm machine with the trapped unloader, not the skid with the flow unloader. Took fitting loose on the reel and let it drip until it had lost enough pressure to undo a quick connect.

Just twist your unloder, let it go to bypass and disconnect.

Lol. That’s not how this works

Figured it out, however not using any of these “interesting” suggestions lol. I particularly enjoyed the one saying to just twist the unloaded to bypass, & disconnect. The one closer to what I did was to loosen a fitting until it leaks. I looked closely at the tip, & there appeared to be an obstruction inside of it. The problem was that I was simply scared to try and shove something into it, that the blast of pressure would be catastrophic. However, I found a small piece of metal, grabbed it with a crescent wrench, & shoved it into the orifice. This caused the obstruction to push pack, thus reliving the pressure. Stupid I never thought to do that prior to me posting this, but lesson learned I guess. Used the ball vale & swivel connection again today on another house. Absolutely LOVE IT. Game changer. Thank you for the responses & help guys. As always, much appreciated​:+1:t3:

Rick, I have an unloader on my machine, along with a pressure gauge. What are the benefits & methods behind using one? I always thought that by tightening it, you were increasing the pressure, & vice/versa…

Flow sensitive or pressure sensitive unloader? The latter is typical. The former is easier on your hands and wrists. 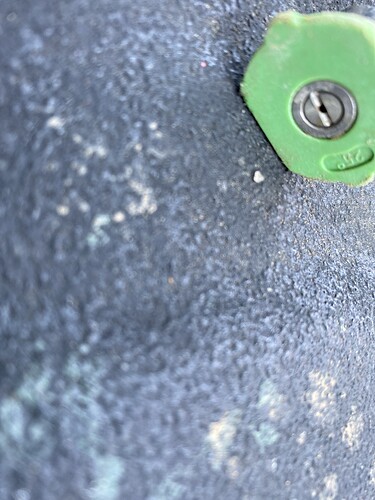 Did this cause it? Rock. I was in the mud today

Yes, it clogged your tip @Jeffmc. Get a pic set from pressuretek.com. great for stuff like that and replacing orings

@Hotshot thank you very much for the info

Hello all, I know this is an old post, but I figure I still give it a shot as I need some suggestions to fix this issue. I recent fixed my 2800 PSI Ryobi gas pressure washer as I could not get ot start after sitting for two years. I ended up taking the carburetor apart, de-gunking it, and it started right up, however, I have a new issue.

The pressure washer turns on fine, but water is not coming out of the pressure hose dispite squeezing the trigger. Ended up, we forgot to take the white nozzle of the hose 2 years ago and it was clogged not to mention stuck in the gun. We finally managed to get the nozzle off using WD40 and a lot of force; and immediately dirty rusty water came out of the spray wand.

So we turned the water hose on, started the pressure washer, squeezed the trigger and the trigger was super hard to squeeze, not to mention when we forced squeezed it, nothing came out. After trying several times, my 23 year old son who knows nothing about pressure washers is saying he thinks we now have pressure built up in the pressure hose and it is making everything impossibile to disconnect.

We finally was able to remove the tip from the hose, but the trigger on the gun is not releasing the water, the hose is super solid, and it feels impossible to unscrew the hose joints as it is stuck and will not unscrew. We tried unscrewing the hose from the gun and from the machine and nothing. We were able to remove the regular water hose, but not the pressure hose.

I am to the point where I am thinking of cuting the hose with a box cutter and just getting a new hose, but I dont want to do that unless I really have to. Honesty, I dont know whats up with it… could be pressure but I am also thinking that because everything was together for 2 years, that it corroded/froze together, but that would not explain why we can not uncrew the black collar/connector. 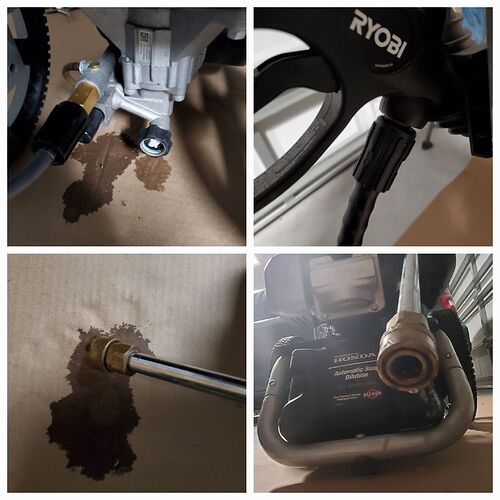 Hate to say it man but this is a forum for professional washers, we generally use commercial units.

Just let it sit, it will loose pressure eventually. Or rip the hose.

But like already mentioned, This forum is geared for the professionals, the machines we use are a bit different in design

Also, where the garden hose connects to the pressure washer pump there is usually a screen/filter that has a rubber gasket around it. In your photos, you show something in there, but it appears more solid than the typical screen/filter I am used to seeing. Maybe it’s jus the angle of the camera, but worth looking into. 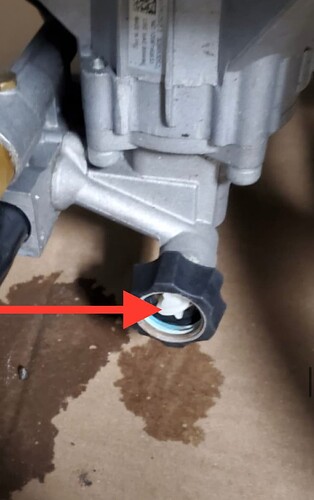