I just got one of those 3 way polly tees for my SH tank from PT. I decided to stop using a bucket of water to stick my drop tube in to rinse my injector. This 3 way seems flimsy, do these break a lot? If it does I need to order some backups. If it becomes a PITA I’ll go back to the bucket until I decide to go with one of those fancy systems.

I also got tired of disassembling my intake (buffer line) to put antifreeze in my PW. instead of adding some kind of a three way I’m in the process of installing cam locks on the hose. I figure I can disconnect from my buffer tank line and add my hose for the 5 gallon bucket of anitfreeze. Any problems with this idea? I saw some really neat set ups, but I want to keep it simple. I use cam locks on my feed line/hose, they don’t leak there so I don’t anticipate problems.

As the old timers say, if it ain’t broke don’t fix it, and here I am fixing it.

Buy backups for everything.

Use the three way valve to winterize. Cam locks will eventually leak and suck air.

Is there a way to see if it is broken?

Also, be sure to idle your machine down while you’re winterizing. Even with three way valves you’re creating an air pocket when switching between water and antifreeze. Idle machine down and it’ll pull harder. Just in case you didn’t already know that.

These valves cost quite a bit more but are cheaper in the long run. They have viton seals. So much better than the cheap gray valves.

If you have a strainer before your washer an easy way to winterize is take out the plug on the end. You can screw in a 1" hose barb, short section of hose, and a funnel. With your long winters I would definitely add a 3 way and a small tank. 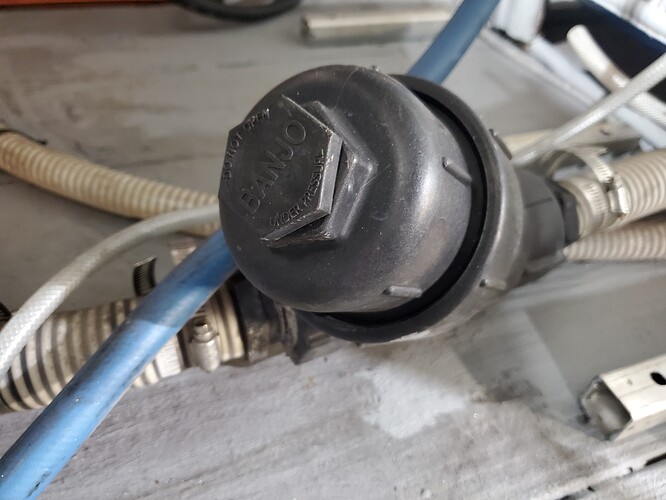 I like those filters but I wish they’d make that style with a clear housing so you can see when it actually needs to be cleaned. Great idea with the plug

Good reminder. Been well over a year since I checked that filter

It’s fine. Mine never has anything in it anyhow.

Makes sense, can’t say I knew that though, thank you.

I’ll look at it, my line is 1.5 inch and so far all the 3 ways that I looked at are about 65 dollars, plus parts. On a side note, the stainless ones are about the same price as the banjos

Those plugs also have a standard pipe thread (mine’s 1/2”). So I threaded in a ball valve and a length of hose. It’s usually used as my dump line, but I can close the valve between the tank and filter, and drop the dump line into my bucket of antifreeze and winterize that way.

Using the plug location for a dump out valve has the added benefit of rinsing any larger debris from the filter.

I only run the antifreeze through the pump and bypass line. All my hoses get gravity drained by parking at the top of a hill and running them down the slope. The process produces enough suction to clear all the plumbing between supply reel and tank, and between the pressure reel and machine. I usually pack it in for the season after that, unless we get an early frost or something.

I second the viton seals 3 way valve. I have 2 and love them

Wow, can’t tell you how often I check mine. I don’t know what it is, but people must have crap in their outside lines cause I have stuff in my filters all the time. They are flushing all the hydrants in this area, so all the water is going to be messed up for days, and most people don’t flush their hose bibs. I’m not PW this week, working for my friend installing pools - hoping to talk the clients into deck staining jobs. A friend in need is a friend indeed, but a friend with weed is better (song reference, I don’t smoke).

Eh I run a clear filter now but I ran a black filter similar to @marinegrunt’s the last couple of years and I’d pull it apart and clean it with every oil change but there was hardly ever anything in there. My area does have exceptionally good water. Low TDS, very little treatment needed to make it suitable for consumption. We get a water report every year and it’s basically the same thing over and over. “It’s good to go.”

Now those oilfield jobs I’d clean the filter on each machine every couple hours or the filter media would start to collapse from being so plugged up.

These valves cost quite a bit more but are cheaper in the long run. They have viton seals.

I’ve got the exact same ones, going on three years now using them, Highly recommended, And we do real washing in extremely dirty locations not your typical SH Daisy spraying stuff like Grunt does.

I have a clear filter before my buffer tank. That seems to filter 99.9% of the water. My strainer rarely has anything it in.

Be sure to flush the customers spigot before hooking up. Some houses still have galvanized and can have all sorts of stuff in them. Especially if they haven’t used their hose in awhile. You don’t have to flush for long. 20 seconds is probably plenty.

Yep. I always run the tap for 20-30 seconds before I hook up. It flushes the system a bit but it also gives you an idea of what kind of flow you’re working with so you can gauge when you can start washing and when you can shut down while finishing the job.

Your right, I normally pull up, hook up, go to door, then go to trailer and lite er up and get it done. Not today though, I was a pool bithh. That is much harder work than PW, mainly just the shoveling sand and wheelbarrowing. The nice part was the 1.75 hours of sitting around waiting for the water truck to show up. Hooked up hose and thank goodness it didn’t get sprayed directly in, that was some ugly orange and black water for about 30 seconds.

I think a filter before the tank just makes sense. I fill sprayers from a line that’s hooked to the buffer, wouldn’t want sand clogging my nozzles. Plus, the tank looks enter longer. Tanks that aren’t filtered before are definitely a mess. As long as you have a pump before the pump you can run as many filters that you want. Just make sure they’re large enough to provide the flow you need.