We washed a real dirty home a couple weeks ago. Everything turned out great and the client was super happy. A few days later we got an email about their shutters being faded and spotted.

Their stance is the shutters looked fine before we washed the house and now they don’t. I explained that the soft washing washed off the failing coloring on the 20+ year old shutters and that it is time for paint or replacement. They understand this but are wanting us to cover the cost or turn into insurance.

Just wondering if you guys have run into any similar issues and how you handled it? Also any tips on not fading people shutters in the future. Maybe add more disclaimers to our estimates also? Out of the hundred of houses we have washed, we have never run into this. I am pretty much chalking this one up as a loss. We would have not done the job if we had known it was going to turn into this, but then the client would be stuck with a nasty looking house. Seems like a lose/lose either way for us. 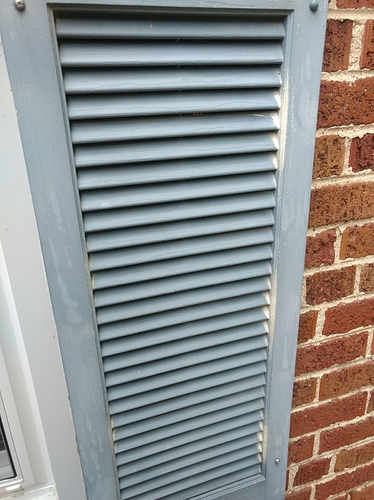 Before photo?
Always cover your self.

I dont think most people really know whats going on or around there house. But after having it washed they like to take a look around to see the results. That’s when they find out all the problem and of course “us” being the last to touch the house everything is our fault.

Yes what @Donte55 said walk around the house beforehand while your taping up keyholes and electrical boxes and take pics of faded shutters, holes in vinyl, loose siding, oxidation issues…anything you see as an issue. Before pics will save you. It’s good to get before/after pics anyway but anything I see as an issue I make sure I have on camera.

They were like that before. Homeowner never noticed…shoot most couldn’t tell you what color their shutters are without looking st them.

Don’t hand in to insurance

You already sold yourself out by telling them that your process did cause it/ make it visible.

Four options…one go take off all the shutters and spray paint them. (We did this on our own house and they look great three years later stil)

Buy new shutters and put them on for them

Hire a painter to do it

Or tell them to beat it, you cleaned the house and the shutters and your not liable because of failing paint. Depends on who they are, what neighborhoods they live in …ect.

I would honestly go with the last option…there somewhat happy and you dont have to see them again.

They probably were not is great shape before, but there’s no question the shutters were faded and spotted as a result of our washing. We just washed off whatever coloring that was still hanging on. My guys are actually pretty good about taking pictures of preexisting thing like dead plants or other damage. I just tried to explain to the client exactly what happened and that things don’t last forever and after 20 or so years the shutters had seen better days.

Planning on having a painter give an estimate and see where it goes.

Cheaper to give house wash for free and move on. Either way that sucks though…it’s one of those things that if you always explain oxidation on siding and shutters to uninformed customers it may scare a lot of them away. Most houses it’s not a problem, and when it is most customers don’t notice. The ones that do turn into a huge headache

I would agree with @Patriotspwashing here that I would just give them their money back in this case and it will be less expensive than hiring a painter. They were happy with the house wash and it’s obvious they haven’t painted their shutters in years. You may have jacked yourself a bit saying the house wash caused some of it. I’ve been pre-wetting anything that looks freshly painted or just taking pics of faded shutters beforehand. Some people unfortunately are out to get people…even if it’s subtle with this email about the shutters. If they know they got a house wash for free they’ll probably drop it and be happy. I always tell people up front a house wash doesn’t renew the siding or painted surfaces…it just cleans everything well. I had someone ask me one time if the house wash would brighten and renew the paint on their shutters…I somewhat laughed…I could tell they hadn’t been painted in 10+ years…nope…they need repainted. But some people just don’t know that’s why I undersell.

When I walk a house providing an estimate I always mention oxidation and that there are risks to old paint. Just this weekend I had a home whose Chimney was extremely oxidized. I brought the client out showed them the oxidation. They understood that the home would need a repaint. I used a magic eraser on another part and paint came off immediately. Better to have the conversation in person than over the phone in these cases.

I’m cheap and I have a paint rig so I would remove and paint them. That said IF YOU REMOVE them make sure you label where each one goes even if they all look the same. The mounting holes are all slightly off from one another and you will spend a ridiculous amount of time getting them back where they came from. Don’t ask me how I know this…

We’re those white edges there before. That doesn’t look like something soft washing can do. To anything. Looks like the paint is removed. But tough to tell from a picture. Either way your choice is to either fix it or don’t. If you don’t know for sure that it wasn’t damaged before you cleaned it then the rite thing to do is fix it. I would not refer it to my insurance though. Nor would I fix it myself. Your opening up yourself to more problems that way. Hire a painter. Move on to the next job

This is why it’s important to make contacts and relationships with other companies that can send you work. Roofers painters landscapers general contractors. And so on. At some point you may need them. And if you do Buisness with them they will likely do rite by you when the time comes

Thanks for all the replies and good information. I’m going to have to start taking a closer look at shutters now when I do my estimates and be sure to get pictures of questionable items. We’ll probably just start prewetting all shutters too while we’re hitting the grass and plants.

Going to work with the client to get them straightened out. It was a $600+ house wash, so we’ll see what the painter says.

I guess I am stuck on how to keep this from happening in the future. When we wash Trex decks, I always let the customer know there is a good chance the color might lighten up on the older ones, and even state that that on our estimates. No one has had an issue with that and I guess if they did it would be a good warning to not do the job. Maybe we just needed to treat shutters similarly?

would honestly go with the last option…there somewhat happy and you dont have to see them again.

Bingo. If their house wasn’t maintained well before and now they’re upset about the shutters they’re probably the type to try to get something for nothing.

Give them their money back and blacklist them.

I rarely run into shutters without some oxidation.

Your painter gets a few drips or a faint scratch from a ladder on the siding. Now they want YOU to replace the siding. Beware people like this.

If you see runs on the siding below the shutters the same color as the shutters it is an indicator that they will bleed color when you wash them. I’ve had them do it without the bleed stains too but something to look for.

Something else to consider if you want to remove and paint them is that you can have Sherwin Williams or most other paint companies make up whatever color you want in a spray can. It would probably be from their commercial paint store but it would allow you to spray a house paint with a spray can. It would get you the same look a painter would get.