So a local contractor, had a accident while working in a home, his work truck spilled some oil. He immediately tried cleaning it and used wd40? Someone told him it would work… That sounds like bad advice!

I helped him out, by using a degreaser and steam washing it my ball valve and it improved a good 70% it was BAD!! But after drying it still shows… he would like to minimize it, he understands it’s a tricky situation but I’m really trying to help the guy out… any advice? 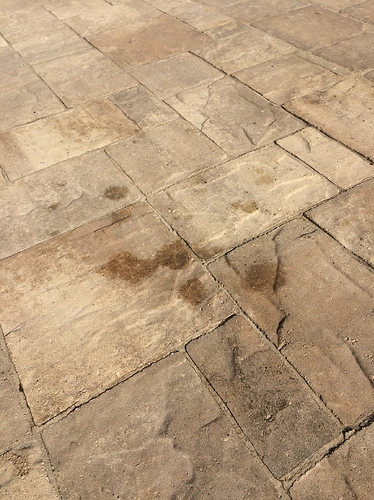 Straight degreaser, agitation and heat, but it will never go completely away.

I remember @squidskc had posted about cat litter or oil dry and cinder blocks a long time ago, never tried it but it could help.

Roger that, He know’s this but all he want’s is to minimize it a bit more…

I did use straight degreeser and all the heat I could! But some if it came back… Hell if you saw this before hand it’s a HUGE improvement… How about just post treating it now?

Let the degreaser dwell as long as possible, then put more. Then more heat. Then cat litter with cinder blocks and tell him you did your best.

Burn it out with a weed torch

If it’s a fresh stain the cat litter crushed into the stain with a brick does work pretty well. If it’s an old stain it will come back in a few days.

I don’t own a weed torch, Should I buy one? Or have him buy it and use it at his own risk? I’d hate to dmage something just by busing nice

Degreaser…put on straight and let it soak in and dry. Few days later wash off. That’s concrete though I know nothing about those stones.

I had some spots on my drive where I poured a strong butyl +hydroxide degreaser straight on an oil stain. Left it…few days later it rained and the stain was 99% gone.

Be careful with the torch heat. It could crack or spall the pavers

Wanted to post that video for you, but was afraid of the copyrights, you only have to make sure! stones are as dry as possible, if not can explode, and not burn anything else around of course.