So I’m pretty sure this is a dumb question, but when it comes to tech I’m full of those…I’m pretty certain I can swap my inlet barb to the opposite side of the pump without any other changes, correct? The logic makes sense, but I’ve done other things that seemed the logic would work, only to find out some other issue, lol 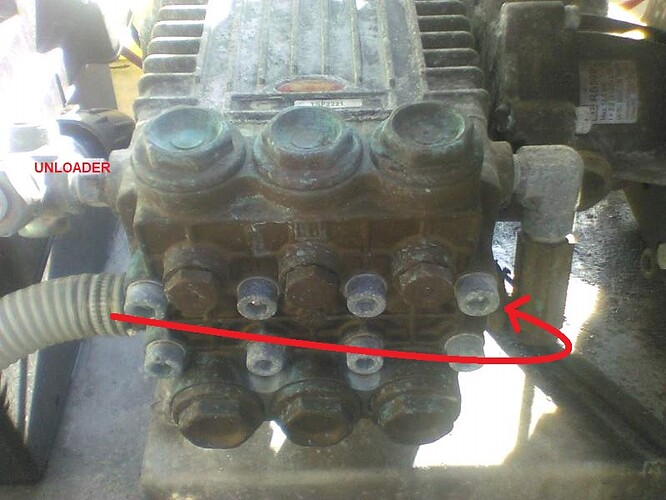 The way my guy put this thing together I have to remove the inlet barb to replace the unloader, unless I’m entirely missing something. If so, I’m going to put an elbow barb on the right side and run the supply to there.

Yep, no problems with that all all 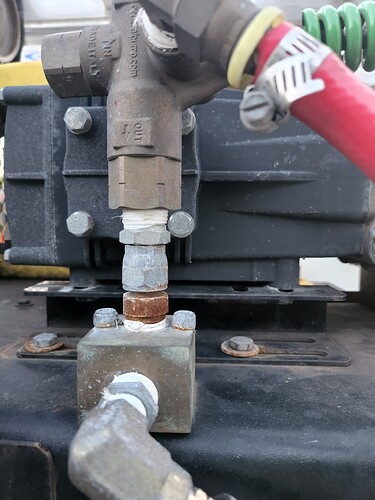 Sweet, thanks! I was thinking a QC would be nice on the unloader (pump side), but probably a bad idea…I think I will put a 1/4" one on the bypass outlet though. If I move the intake out of the way, you just undo 2 QCs, twist off the unloader, twist on the spare and back to work…the way it is it’s a bit of a production to swap it out

Of course, I’m only assuming the unloader is the problem…the guys reported that the pressure line just “went dead”. PW runs fine, no water out of the gun, no matter where I set the unloader. Couldn’t tell if it was bypassing into the tank (mainly bc I didn’t chck, thinking swapping it out would be easy

You don’t want a quick connect on the unloader. Way to much vibration. 1/4 is to small for bypass anyway.

well, I was going to match whatever the barb is on the bypass now, maybe would have to be 3/8" or I’d have to order something…but that’s just for future ease, not really urgent. I probably won’t swap all the other trucks until the unloaders go either, lol. I figured the o-rings would be constantly shot putting one on the unloader anyway…if it was a good idea, all you guys would be doing it already…

I always used half inch for bypass until about a year ago. My landa guy started swapping them over to 3/4 when a truck would stop in for something.

I figure whatever the barb on it is, it is…can’t gain anything beyond the diameter coming off of it…

It makes sense in theory at a glance but then again folks run a 1 inch hose to a 1/2 inch inlet from the buffer tank. Sometimes more is better. Nothing to lose here.

true story…shopping for elbow barbs now…was just thinking “why do we have 1” hose going to a 3/4"NPT inlet, lol

Barb gets changed with the hose. He says it’s better on the pump and it makes him happy so I don’t care.

Swap done (inlet setup and unloader). Working on setting the unloader, but still getting zero flow from the gun…it’s not looking good…it is bypassing, so maybe we’ll be OK…

How much is it bypassing. If it’s a lot, start cranking down on the unloader nut. Remember, once you start the machine have the trigger pulled and don’t let off until you get it close

I’m going to have to pull the hose out of the tank, or take it off the unloader again. I only saw enough to see that it was putting some into the tank (so I could be confident it wasn’t just building up somewhere, lol). I’m pretty concerned that nothing is coming out of the gun…not a drop. I need to get away from my desk and pull it back out of the shop to figure it out here shortly…

If you take the unloader off and turn the key, what happens? If no water comes out put a new pump on and go back to work

Well, that happens with a new unloader on…I’ll try it with it off too, but I’m afraid it’ll be the same result. Hard to see the sight glass the way they mounted it, but I think the seals may have gone and all the oil leaked out…and now that I’m looking for it there’s oil under all the pumps on every truck. I may have to redo the seals on all of them ASAP.

So my other one came back today…the bolts holding the gearbox onto the engine literally fell off! Got longer ones and got it back on the shaft and bolted up, now same issue, not pulling any water. Engine runs fine, gearbox or pump is making almost a bubbling sort of sound. When I hook up the hose to the Y, it sprays out the garden hose pressure (and a little out of the bypass), but when I turn that off zero water comes out. I’m at a loss…now I may have to just get 2 new pumps and carry on.

… and water for certain is flowing to pump unhindered?