New equipment can change your life!

I haven’t been on much lately, just been waaaaay too busy, but I had a situation last week that changed EVERYTHING for me! First off, I’m a cheap ■■■, but I do realize that good equipment is a good investment, and usually worth every penny! I run a gx660 with a 5/5000, a gx390 with a 6.8/2500, both gear drive, and a gx390 direct drive 4/4000 portable. Also recently acquired a 4/4000 hot machine that needs a little TLC. Now on the the latest situation. About 2 yrs ago I decided I needed a surface cleaner, and found a used hammer head for $150, and it worked with the 4/4000, that’s all I’ll say. Soon after that I ran across a Mi-t-m 19” which is exactly the same as the whisper wash classic, or so I thought. It was literally brand new, wasn’t a scuff on it, and the spray bar was still shiney. $125 later it was mine! It really changed my concrete game! It was much faster than the hammer head, rarely striped, and made me a LOT of $$$$$. Until last week it performed flawlessly, probably put 1000 hrs on it. I have several huge projects coming up (5 apartment complexes) and decided I needed a bigger surface cleaner. On Tuesday morning I ordered a whisper wash big guy 28”. $803 shipped, now I’m patiently waiting for it’s delivery. On Wednesday morning I noticed a little dribble from the mi t m’ s swivel, and by Thursday it was leaking pretty good. So my search was on for a new swivel. The exact replacement swivel was $560, best price I could find after hours of searching and calling all over the country! Nobody within 500 miles had one in stock, and I have LOTS of concrete to clean! I researched and decided the WW classic swivel will work, but again, none in stock close to me. I found a dealer in Little Rock, that had a new classic in stock, and said he would rob the swivel off and sell it for $350. Crazy, but I needed it. I drove down there, and as he was putting it on the bench to take it apart I decided to hell with it, I’ll just buy the whole thing. It was $800, which is high, about $150 more than online, but I could make $600 with it that day. Done deal. Now, on to the actual point of this story.
This thing literally changed EVERYTHING. it’s almost impossible to explain, to someone who hasn’t made the side by side comparison, but WOW. IT LOOKS exactly the same as the mi t m. But there is absolutely no comparison, period. I can walk more that twice as fast, it spins at least twice as fast, and cleans 10 times better!!! I made $1600 with it Thursday, Friday, and Saturday.
I don’t know how or why, because everything is exactly the same besides the 3/8 hose and the the swivel, so I assume that’s where the magic is. 5gpm at 3000, and I can literally walk a normal pace, and not worry. The only complaint I have is the trigger design is pretty dump, it pinches my pinky ever time I let go. But I’ll deal with it!! The big guy will be here Wednesday, and I now have very high hopes for it, I’ll be running it at 6.8/3000. I also ordered a WW green swivel for the mi t m, and I’m hoping it will perform as good! For those of you who already experienced this, shame on you for not sharing, and to those who don’t own a WW classic, order one TODAY, $650 online will change your game I promise!!! 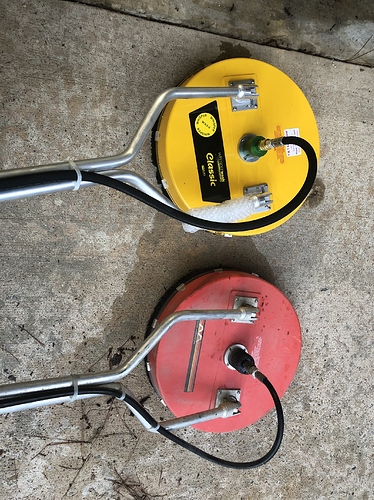 It’s almost like you can run when using that and not stripe anything.

Oh I get that, yesterday I ran an 8gpm and a fat boy to wash and rinse a house. I ■■■■ you not, we walked around and had it clean in 20 minutes. Soaped all 4 sides and then we both rinsed together at what I’m assuming was 12 gpm. Obviously rolling up hoses are not included in this time.

Love WW. I’m glad I took the advice of several here and started out with one. We did a little under 30k sqft of flatwork in one day with two guys, two machines, two whisper wash, 24” & 20”. I doubt I’ll ever try any other brand. I did see a custom spray bar on FB that’s supposed to spin a lot faster and let you clean faster. I never bought one simply because I’m content with the current speed. I’m still curious about it.

I want the mini mondo. That’d be a time saver. I’m finishing up a 50000 sq ft parking lot tomorrow. it would have been nice to have

Who did you go to in Little Rock @ShinedUP ?

Ive used both hammerhead and classic on the same machine and dont see a real difference at all other than the classic is a little lighter. I just like all the aftermarket stuff for the classic and how you can swap bars and use a 8gpm with it.

What difference is most noticeable for you between the two?

That ole man knows his stuff,his son Greg is pretty sharp to.

It’s been a year since I had the hammer head, but the mi t m was way faster, and the classic is at least twice as fast as it. I was cleaning 900-1000 linear feet of curbs with one tank of water with the mi t m, and got about 2200’ with the classic! On driveways, I can walk at my normal pace with the classic, and the mit m I had to constantly hold myself back to prevent stripping.

I seen a mi t m at my vendor and it looks very clean $450 but the handles were both bent like guns not sure how comfortable that will be it also looked like the bar sits closer to the surface than my hammerhead. Thats weird i can walk at the same pace with hammerhead and classic but im useing a 4gpm/4k psi machine also the hammerhead has 25025 tips and classic has 25030 tips. I will buy a classic when my hammerhead craps out.

The ones manatee sells down in Florida? Forgot the name of them but they look nice. Same boat as you though have two WW and not sure why I would ever consider anything else.

My mi t m is the same as the classic with a different swivel. Exact same handle, housing, skirt, and everything. The classic handle is missing the bracket that holds the gun on the down side, but it’s bolted on instead. 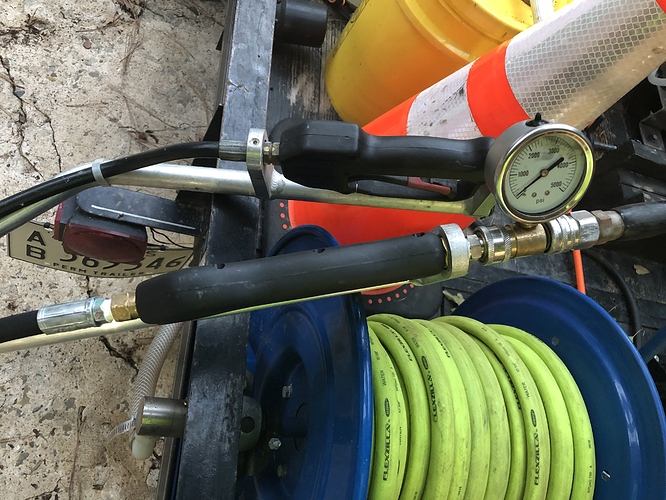 Yep, that’s the one.

This came today. Kinda excited to try it out Saturday! 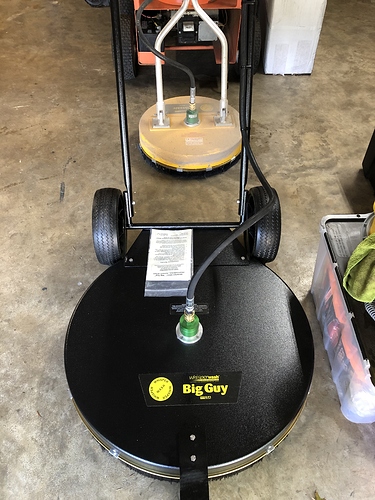 I too went to a WW classic and man! I don’t regret a single penny

Man is that pretty !

I have the little big guy and I’ve had the big guy. they do a good job. when you make your turns turn away from the gun and it’ll keep the pressure hose out of your way